Colonel in the Australian Army

He was voiced by Joe Hanna.

During the events prior to the game's main storyline, Ryder was interrogated to test his loyalty to his country by being presented with photographs of individuals which he was asked if he would agree to kill without question (one of which was his wife, Emily White, which he agreed to reluctantly). After passing the test, Ryder was deployed on Banoi Island in order to aid with containing the recent infection outbreak. During the mission, Ryder and his squad on board of a helicopter were ordered to initiate a bombing run on the highway in the jungle. During their flight back to base, the copilot of the aircraft became infected and attacked the other pilot, forcing the craft to crash land in Moresby.

Ryder awakened from the crash several hours later to discover that he is the lone survivor of his crew. He was then contacted by the B.I.D.F. Commander, who instructed him to regroup with B.I.D.F. Unit 4 stationed near Saint Christopher's Church as the evacuation zone he requested pick up from had already departed. Ryder later arrived at the unit's location to discover that everyone had been killed by the local gang known as the Raskols before being stripped of their weapons and equipment, which included the explosive charges needed to destroy the City Bridge in Sector 4 (Old Town), in order to prevent the infection from spreading any further.

He was then informed by the B.I.D.F. to make his way to the Police Station in Sector 3 of the city in order to recover the explosives to complete Unit 4's mission. After fighting his way to the Police Station, Ryder was confronted by members of the gang who taunted him over the loss of his fellow soldiers. After a heated firefight, Ryder managed to kill the gang members and collected the stolen equipment before being instructed to proceed with finding and destroying the bridge. With most of the roadways blocked, Ryder climbed into a manhole that took him to the sewers beneath Moresby in order to gain access to the riverside.

Upon exiting the sewers, Ryder's progress was again faltered by a group of Raskols that claimed the City Bridge as their territory, leaving him with no other option but to kill more civilians which the B.I.D.F. intel allowed in order to ensure the mission's completion. With the gang members disposed of, Ryder proceeded with planting the charges on the bridge and demolishing the bridge. With the mission accomplished, the B.I.D.F. intel ordered Ryder to make his way to the evacuation zone in Sector 6 (Gas Station). Ryder then fought through waves of zombies as he waited for the evac chopper to arrive.

Once the chopper arrives with his wife however, she regretfully tells him that one of her patients bit her and now she's infected. She tells him to leave without her, but then decides to turn around to meet her at the Banoi prison. Once he finds her however, she's strapped to a chair while mid-transformation and he's forced to work with a prisoner named Kevin Barrister, a terrorist who goes by the nickname "Charon", to ensure Emily's safety. After turning the surveillance system back on and obtaining antibiotics to slow down the effects of Emily's infection, Kevin tells Ryder that Sam B, Purna, Logan, and Xian are on their way with the antidote to the virus.

After Ryder gives Emily the antibiotics, he returns to Kevin and discovers that he was somehow responsible for Emily getting bitten, but pretends to not know for the moment as his wife still needs help. After clearing a shower room for Kevin, Ryder discovers that Kevin had been secretly working with the heroes while posing as "The Voice" and threatens to kill him for not only betraying him, but making Ryder betray his country. Kevin however ensures Ryder that he won't actually let the heroes speak in person with either of them, planning on knocking them out with a gas trap and then stealing the antidote off of them. Before Ryder sets up the trap however, he destroys Kevin's computers to try and stop further tricks against him, and then locks him inside a control room.

Kevin however informs Rayder that the antidote is actually a vaccine that would only work in the very early stages of the zombie infection and Emily is way too far gone to be helped. While Ryder hurriedly goes yo get Emily to an ICU, Kevin reveals he had a backup keycard to the control room and taunts Ryder behind his back that he should've killed him while he had the chance to do so.

Once he finds the now fully infected Emily and brings her to the roof of the prison however, Kevin has turned the heroes against Ryder completely and Jin releases Emily who in turns bites and infects Ryder, who's forced to kill Emily and murders Jin in revenge. Ryder panics and injects himself with the antidote, which is secretly only an enhanced version of the virus, and Ryder is turned into a mixture of a Ram, Slicer, and an Infected zombie, but is killed nonetheless. Kevin then plans to use Yerema as a "walking timebomb" to further spread the zombie virus. 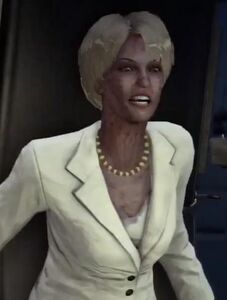 Ryder's zombified wife, Emily.
Add a photo to this gallery

Retrieved from "https://villains.fandom.com/wiki/Ryder_White?oldid=4030101"
Community content is available under CC-BY-SA unless otherwise noted.