Ryo Bakura is a friend of Yugi and one of the primary antagonists of the Yu-Gi-Oh! franchise, who almost always appears when under the control of the evil remnant of both the Dark God Zorc Necrophades and the poweful and maniacal grave robber, Thief King Bakura, who both merge into the being that is Yami Bakura, a sadistic, powerful thief who would kill to get what he wants. Because of this, his name is sometimes used to describe both the friendly high school student and the villain, as the two characters are often mixed.

In the overall story, Yami Bakura is the primary and most recurring antagonist in Yu-Gi-Oh!. However, he is merely a vessel to the true main villain of the series.

It was originally believed that Yami Bakura was a dark half of Bakura, like Yami Yugi was to Yugi Muto (but not the evil within Marik) but it was revealed that he was actually a fragment of Zorc's soul and Thief King Bakura's soul planted in the Millennium Ring. The Ring was Ryo Bakura's family heirloom and therefore Zorc was able to possess Bakura for many parts of the show. 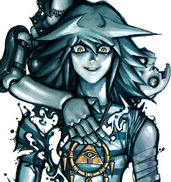 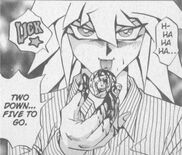 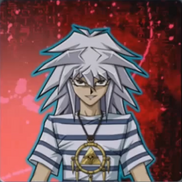 In the video game Yu-Gi-Oh! Millennium Duels
Add a photo to this gallery
Retrieved from "https://villains.fandom.com/wiki/Ryo_Bakura?oldid=1255988"
Community content is available under CC-BY-SA unless otherwise noted.