The Capriccio of the Paradise with Light

Make Yuri and later her daughter Megumi his.

Obsessed Stalker
The Spider Fangire, also known by his human identity Ryo Itoya, with his true name being The Capriccio of the Paradise with Light is an Insect Class Fangire with an obsession for the Aso women (Yuri in 1986; Megumi in 2008) and a recurring antagonist in Kamen Rider Kiva.

Taking notice of Yuri's daughter Megumi, Ryo attempts to have her and sends the Sheep Fangire to kidnap her, but the Sheep Fangire soon develops his own obsession with Megumi, leading Ryo to make his own attempt to abduct Megumi. Spider Fangire later makes a deal with the user of the Ixa System, Keisuke Nago, to be left alone to pursue Megumi in order to bring Kiva out into the open. Once he completes his task however Nago drives him off.

An A.R. World version of Spider Fangire/Ryo Itoya from the World of Kiva appears in World of Kiva Arc in Kamen Rider Decade, being the first Fangire appearing in the said series. He encounters Tsukasa Kadoya and Natsumi Hikari while posing for a photo in the Hikari Studio, and revealed to them the truce that exists between Humans and Fangires. 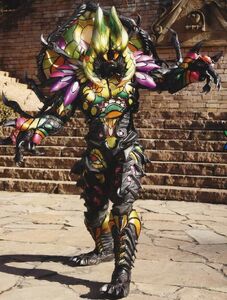 Retrieved from "https://villains.fandom.com/wiki/Ryo_Itoya?oldid=3543461"
Community content is available under CC-BY-SA unless otherwise noted.