Arrogant Dimwit
Ryoji Hase was the leader of Team Raid Wild and an antagonist in the "Beat Riders Saga" of Kamen Rider Gaim. He used the Matsubokkuri Lockseed to transform into Kamen Rider Kurokage. He later eats a fruit of Helheim and is mutated into the Hekija Inves.

He was played by Atsushi Shiramata. As the Hekija Inves, he was voiced by Yuki Anai.

Ryoji was first seen dueling against Team Baron, however he lost as Kaito summons 3 Inves to fight against Ryoji's sole Inves.

He then tries to win against Team Gaim by using Kaito's previous winning tactic in using two Inves, a bet from Team Invitto's Leader Hideyasu Jonouchi, but again he lost to Kouta as Armored Rider Gaim in Orange Arms.

Sometime later, Kaito forms an alliance with Teams Raid Wild and Invitto, though Ryoji willingly refused to ally with Team Baron. However Hideyasu agrees to ally with Kaito, thus gaining the Matsubokkuri Lockseed from him to win against Team Gaim.

Sometime later, after Hideyasu loses to Armored Rider Ryugen, he finally realizes what Ryoji said before allying with Baron foolishly, and tells him that they will be Baron's slaves. Refusing to let that happen, they desired to have a chance to be on the same level as Kaito, and thus gaining Sid's attention as they received two Sengoku Drivers from him. After Baron's Inves are defeated, he and Hideyasu appear as they transform into Armored Rider Gridon and Kurokage respectively, which surprises Team Gaim.

They betray Baron by defeating him, but Team Gaim's Armored Riders finish them off afterwards, also gaining their Lockseeds. Sometime later, Hideyasu and Ryoji buy replacement Lockseeds as Hideyasu notices one member of Red Hot got a Sengoku Driver and a Lockseed from Sid. Later, Kurokage and Gridon were doing some training until some people arrive, thinking that there will be a battle. Oren then reveals that he announced the battle as he transforms into Armored Rider Bravo to fight Gridon and Kurokage.

All Armored Riders Gathering, The Battle Inside Helheim Forest

Ryoji and Hideyasu were seen taking a part time job as promotional sellers as they have shown no effort of their jobs. Ryoji suddenly got a call from Kouta and went to Drupers so the the leaders could meet Sid. The team leaders wanted the Lockvehicles for Hideyasu and Ryoji so they can participate, but Sid tells them that the device won't be ready until Christmas. On the next day, they joined the battle made by Mitsuzane and before they left to Helheim Forest, Ryoji witnessed and let Hideyasu do a cheat by evolving an Inves to deal with Mitsuzane (as Armored Rider Ryugen) with Himawari Lockseed.

n the forest, he's about to attack Baron, but being hit by fruit turned Lockseeds. They are then encountered by Bravo, but Kurokage left the scene to Gridon then they split up. He soon comes across the white Armored Rider and attacks him, but is defeated and as a result his Sengoku Driver is destroyed.

Ryoji soon became a test subject of making multiple Kurokages for the scientists to use. While dancing, Team Baron challenge Team Raid Wild as he tries to fight Baron in a Inves Game, however, due to his belt being destroyed by Zangetsu, he is no longer powerful and had lost his team and his alliance with Hideyasu, thus he seeks to become stronger to become a Rider again.

While he's frustrated, Ryoji who is looking for Sid at Drupers is not available today. On the street, Ryoji is cowering in fear, having hallucinations of several Inves, Zangetsu, and Bravo. Upon appearing inside construction site, he witnessed not only the appearance of Lockseeds, but also Kouta, Kaito, a Dragon Inves, and the person he blamed the most of having his belt destroyed, Zangetsu (now in a new form called Zangetsu Shin). After seeing an Inves eating a premature Lockseed and becoming an Evolved Inves, Hase becomes deluded into believing that in order to regain his power he has to eat one of the Lockseeds himself, however, the fruit mutates him into an Inves when Takatora tries to warn him to spit it out, but was too late.

As he becomes the Hekija Inves, Zangetsu Shin was about to attack him, but Gaim stops him as he thinks that he is still human. He manages to escape as Gaim tries to return Ryoji back to his human self. Even though he returns to normal, Ryoji still attacks Kouta and later escapes. Later, he went to Drupers and ate one of the fruits, but as he eats, Ryoji changes into his Inves form and attacks Rat. Kouta manages to find Ryoji, he transforms and fights him. While fighting, Gaim still tries to get through to Ryoji and bring him back to normal. However, Ryoji is attacked by one of the New Generation Riders and is killed, to Kouta's horror.

His legacy, along with Yuya's becomes a reference by most of the casts. Three months after the Earth is saved from Helheim invasion, his picture is soon stapled by Jonouchi, on the wall where the Yggdrasill Tower was being demolished, along with the pictures of Yggdrasill's casualties. His Kurokage form is soon used by Jonouchi to honor his death four months after.

Hase is revived through Lapis altering the world to be free of the Inves Invasion. When Kougane spread his black locust to infect other Riders, Hase is among one of them, he is first seen causing a ruckus on Charmant into attacking Jonouchi as Oren tried to calm him down. However, Hase, Peko, and Zack end up dying when their minds are tempted to kill other Riders. His death prompts Oren to declare war on Yggdrasill, who he believes is the culprit behind their deaths. Hase returns when Kouta shoots Mars' horse, reviving the deceased Riders, joining up with him to defeat Kougane. However in the aftermath of the battle, the world is returned to normal, meaning Hase meets his original fate once more.

Unlike his former ally Hideyasu, Ryoji was much more hot-headed. This was shown when he battles Team Gaim, despite having no chance to win and almost declining Team Baron's offer for an alliance, with only Hideyasu stopping him.

However, in battle as Kurokage, Ryoji was much more confident and experienced than Hideyasu. However, he made rash decisions in battle like using Gridon as a human shield and pushing him toward the opponent to make an opening. Ryoji also had a bad habit of fighting whoever he saw, regardless of their fighting prowess (which ultimately caused the loss of his powers)

Ryoji also had some selfish traits; he gave Gridon his name (much to Hideyasu's irritation, who stated that he wanted a cooler one) and often abuses Hideyasu with his combat strategies. Although, Ryoji revealed that he wanted Hideyasu to be more confident in battle, showing that he did care somewhat about Hideyasu as a friend.

Upon his dance team abandoning him after his belt was destroyed by Zangetsu, Ryoji went insane, having hallucinations created by his fear and a delusional lust to regain the power he lost. He then decided the only way to regain his power was to eat one of the Lockseeds, resulting in his mutation into an Inves.

Matsubokkuri Arms is Kurokage's default pinecone-based armored Japanese Ashigaru form. Accessed through the Matubokkuri Lockseed, this form's Arms Weapon is the Kagematsu, while the helmet Kurokage wears is the Matsu Kabuto with the Comb Eye visor. This form debuts in episode 5.

In episode 13, Ryoji transforms into a Hekija Inves after eating a premature Lockseed. In this form, Hekija Inves is armed with sharp claws, like Byakko Inves. He also can spit fireballs from his mouth.

After some hard work, Gaim was able to help Ryoji to be able to return into human form, but the results were only temporary. In human form, his arms were still mutated and he had red eyes and his mind had regressed to a feral state. Hase soon escapes from the battlefield. Sometime later, he comes to the Drupers and becomes an Inves once again after attempting to eat regular fruit, causing him to hunger for another Lockseed. Moreover, he injured Rat from Team Gaim. He then faces Kouta once again. Despite Gaim having a chance to kill the Hekija Inves, Kouta realizes that he can't kill a human, even if he has already became a monster. However, New Generation Rider Sigurd jumps into the battle and mercilessly beats the Inves. The Hekija Inves was soon destroyed by Cherry Energy, resulting in Ryoji's death. 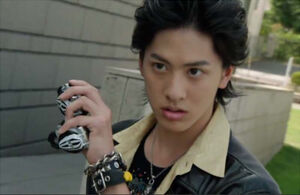 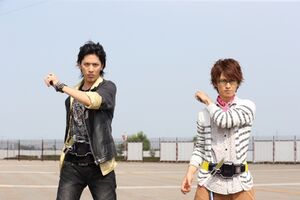 Ryoji and Jonouchi about to transform. 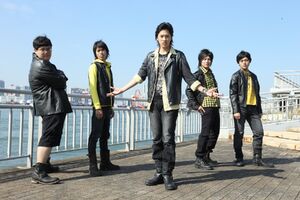 Ryoji with the rest of Team Raid Wild. 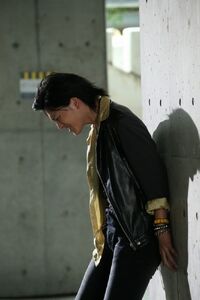 Ryoji after his Sengoku Driver was destroyed. 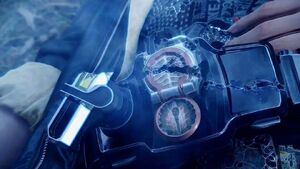 Hase's broken Sengoku Driver after being defeated by Zangetsu. 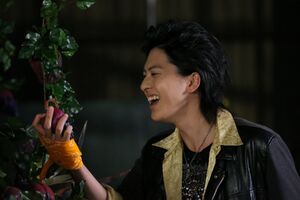 Ryoji eats a Helheim fruit in a desperate bid to gain back his power. 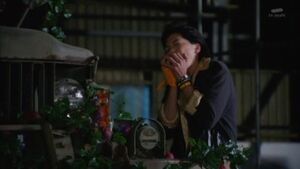 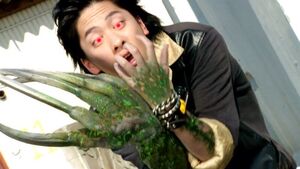 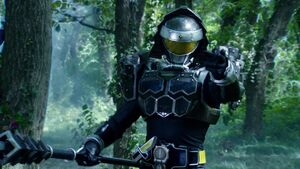 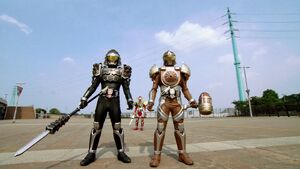 Ryoji makes his debut as an Armored Rider alongside Hideyasu. 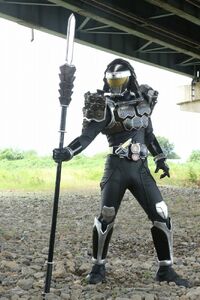 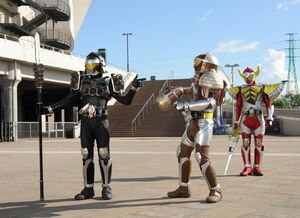 Kurokage and Gridon as Baron's vassals. 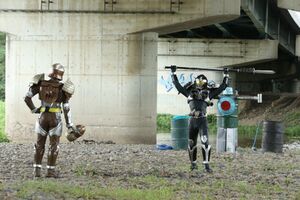 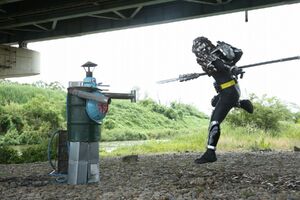 Kurokage training against a dummy. 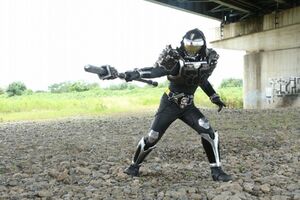 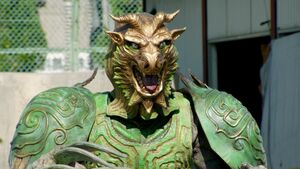 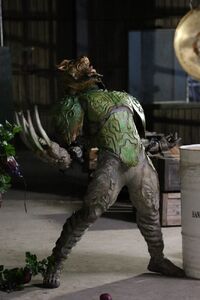 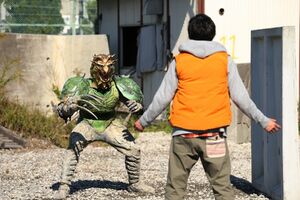 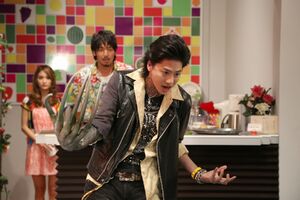 Hase transforming into the Hekija Inves. 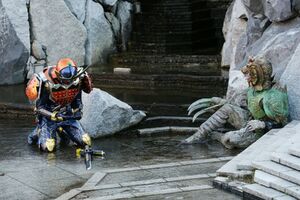