Villains Wiki
Register
Don't have an account?
Sign In
Advertisement
in: Spoilers, One Piece Villains, Manga Villains,
and 30 more
English

Generate flowers in the floor

Aramaki, more commonly known by his alias Ryokugyu (アラマキ meaning Green Bull), is a major antagonist in the manga/anime series, One Piece. He, along with Fujitora, were the two new Admirals chosen to fill in the positions after Akainu's promotion to Fleet Admiral and Aokiji's resignation.

While originally seemingly like a friendly and very laid-back individual, when the need arises, Ryokugyu is an extremely brutal combatant and a follower of the dogma of Absolute Justice. Unlike most of the Marines, Ryokugyu holds strong beliefs of the Celestial Dragons that dedicates his loyalty towards them.

He was voiced by the late Keiji Fujiwara in Japanese.

When first shown, Ryokugyu appeared to be not too different from his predecessor Aokiji. At Mary Geoise he was seen having an amicable chat with fellow admiral Fujitora, relaxing in a chair and simply shooting the breeze despite being on duty to protect not only the Reverie but the Celestial Dragons themselves. Instead of arresting Issho and turning him in to Sakazuki as was ordered due his actions at Dressrosa, Ryokugyu refused to and was perfectly content not doing so, showing a level of respect between the two. He was also shown to be exceptionally lazy, and described himself as being too lazy to even eat, fasting for years, but said he would have a meal if a pretty woman delivered it to him.

Ryokugyu has later been shown to be ruthless in his methods of dealing with his enemies. With his Devil Fruit, his main method of attack seems to be impaling and constricting others with vines, then essentially slowly torturing them to death as he drains their nutrients, leaving behind nothing but shrivelled husks. He openly insults and mocks his enemies, insinuating himself to be above Yonko commanders and that to be defeated by them would be disgraceful as an admiral.

He is a very dedicated follower of Akainu, willing to go to great lengths and put in great effort in order to try and appease his leader. Like Akainu, he disapproves of needless chaos and harbors a strong dislike towards those that cause it. However, he has no issue with disregarding orders from his superiors and instead follows what he believes is best suited for himself and for others. He also believes the World Government to reign supreme and anyone not directly affiliated with them he treats as if they were less than human beings. In a sense, in this regard he is even worse than Akainu, as Ryokugyu behaves very similar to the fanaticism of CP0 in enforcing the supremacy of the Celestial Dragons, who, while for the most part subservient to, Akainu despises.

When confronting the Beast Pirates, Ryokugyu did not make any kind of effort to capture or arrest any of them, instead opting to simply massacre them in droves, demonstrating an affinity for Absolute Justice. Despite his arrogance, however, he is aware of his limits and knows when to not escalate a situation further, as demonstrated when the arrival of Shanks forced him to submit and leave Wano.

Being a Marine Admiral, Ryokugyu is one of the most powerful characters in the story. His strength is enough to crown him one of the World Government's supreme powerhouses. His authority within the organization is second only to the Fleet Admiral, giving him command over tens of thousands of men. He is powerful enough to brush off two Emperor Commanders and openly state someone in his position couldn't possibly lose to someone like them. According to Doflamingo, Ryokugyu's strength is equaled to his fellow Admiral, Fujitora.

He has a Logia Devil Fruit that appears to be plant based, allowing him to morph his body into various flora. He can grow any kind of plants he wishes from his body, such as a dandelion to let him fly, or vines which he uses to impale or crush his foes, then drains them of their life essence, and is able to use this to attack enemies in mass.

As an Admiral, he possessed a Golden Den Den Mushi when he can call the Buster Call anytime if he deems the islands to be a threat. He once had an authority to revoke a Shichibukai's status before its abolishment.

He also has Haki. He has implied of Busoshoku Haki when he can bypass Devil Fruit users including Logia type users such as Sabo (who ate Mera Mera no Mi).

He has a strong will to withstand Conqueror's Haki when Shanks used it to paralyzed Ryokugyu. 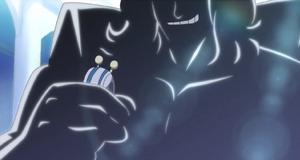 Greenbull's first appearance as a silhouette.