Have a new cellmate.

Ryouken Houinbou is the secondary antagonist of Gyakuten Kenji 2. He is a prisoner in Marī Miwa's jail and the assassin of the President Teikun Ō. While he appears in two cases, he is not the culprit in either of them, despite being responsible for the actions that happen. In the fan translation version of the game, he is named Sirhan Dogen.

Note: Translated names will be used for convenience.

Sirhan Dogen was a ruthless assassin who killed countless people despite being blind. With the help of his guide dog and his bells, he could hunt down and murder anyone he was told to. While he was on a walk, his dog noticed two young boys locked in a car. Not without empathy, Dogen broke the two boys out and put them in an orphanage. The boys were Horace Knightley and Simon Keyes, the latter of whom would grow up to be the game's main antagonist.

Dogen was hired by Blaise Debeste and Patricia Roland to kill Di-Jun Huang when he was visiting an orphanage. He did so but was spotted by Simon Keyes. As a token of gratitude for saving his life, Keyes helped Dogen to escape the police. Dogen took Keyes under his wing, with the two forming an almost familial bond with one another. Dogen gave his freedom up to save Simon from being killed by some of his former clients, though the two still communicated with the two orphans through correspondence chess.

Prison was little more than an early retirement for Dogen. He immediately made himself at home, spending time with his dog and carving chess pieces and weapons, threatening Patricia Roland into compliance. Dogen held a special amount of contempt for her, as she had tried to kill Keyes when he was an orphan. Dogen used her fear of him to set up a smuggling ring, with him having eyes and ears all over the prison, effectively being the leader of it under Roland. Despite being in an isolated cell for the safety of others, he still enjoyed social interaction with his dog Anubis, whom he loved dearly.

In the present day, Dogen and Knightley were playing correspondence chess after Knightley's arrest. After Roland murdered Knightley, Dogen was a prime suspect along with Simon Keyes, as it was believed that Dogen had asked Keyes to kill Knightley. While Simon was indeed guilty for setting up Knightley to be killed, Dogen was only responsible for shaping Simon into the killer he had become, though this was not found out until much later. Miles Edgeworth interacted with Dogen, with the two trying to intellectually dominate one another, though these interactions turned out to be red herrings.

In The Grand Turnabout, Dogen was able to break out of jail during Roland's trial, as security had been moved to implicate the former warden in her crimes. He did not cross paths with Miles Edgeworth until the end of the chapter, where he intervened in stopping Shelly de Killer from killing Simon Keyes, once Keyes had been exposed as the mastermind. The two assassins fought to a stalemate, with De Killer respecting Dogen's wishes to spare Keyes. Dogen turned himself in and guided Simon to his cell, where the two companions were to stay for the remainder of their lives.

Dogen is a ruthless and cunning man, though not one without kindness. He is feared by almost everyone due to how dangerous he is, with even the warden of the prison he's incarcerated being terrified of him. He enjoys toying with people, trying to intimidate them into submission with his odd and eerie mannerisms.

He was also extremely intelligent, being a skilled chess player and sculptor. Despite being blind, he knew how to create impressive chess pieces and play games without being able to see where they were on the board. He also loved his dog closely, even if he had turned him into a killing machine, an act that was still inhumane.

Dogen had a soft spot for children, especially orphans. He had no advantage to gain from rescuing Knightley and Keyes other than kindness, and kept in contact with them over a decade later while even helping them along the way. It's noteworthy that Keyes (a pure sociopath) had genuine respect for Dogen, seeing him almost as a father. This may be why he loathed Patricia Roland so much, as she was a child abuser. 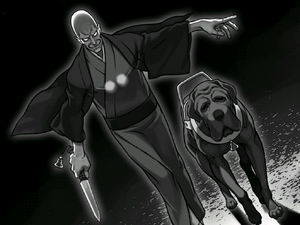