Utilizing the powers of the Terror Memory

Ensure humanity's continued existence at the cost of his family.

Ryubee Sonozaki is the head of the Sonozaki Family and the Museum organization, and the main antagonist of the Kamen Rider Double series.

Ryubee uses the Terror Memory and a special Driver to become the Terror Dopant.

He is played by Minori Terada, who also voiced Colonel Muska in Castle in the Sky.

His wife, Fumine, left him after the death of their son, Raito. He carried on his research, and distributed Gaia Memories in secret to the people of Fuuto City, to observe their effects on the human body. Each of these Dopants was defeated by Kamen Rider Double, and later Kamen Rider Accel.

After adequate research from his Dopants, and observing Kamen Rider Double, he chose his daughter Wakana, to become one with the Earth's knowledge by way of an event called the Gaia Impact. Before he can do this, he is defeated by Kamen Rider Double and Kamen Rider Accel, and dies as his home burns around him. At the end of the series, his soul appeared in front of Phyllip, alongside other deceased members of Sonozaki Family, to say goodbye to Phyllip before moving on. 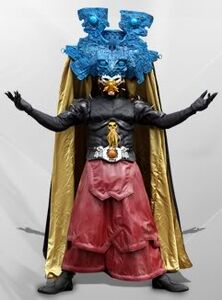