Claim L-Drago as his own.

Recover after losing his power (both succeeded)
Defeat Gingka Hagane and prove he is the greatest Beyblader.
Getting revenge on Dr. Ziggurat (succeeded).
Defeat Rago (failed).

Ryuga is the member of the Dark Nebula organization and the partner of Doji. He is an antagonist in Metal Fusion and the possessor of Lightning L-Drago.

Not much of Ryuga's past is known, except he once joined the Dark Nebula Organization and became Doji's right hand man.

Ryuga and Doji once heard of a forbidden BeyBlade called L-Drago, hidden in a temple at Koma Village and flew to Mount Hagane. There, after getting pasts booby traps, Ryuga acquires L-Drago and uses it to defeat Gingka's father and his beyblade, Pegasus, with ease. However, as Ryuga fled the temple with Doji, L-Drago drained Ryuga of his power. Ever since then, Ryuga had to rest inside of a capsule until he regained his power.

Ryuga is woken up by Gingka's presence at Dark Nebula's organization after he defeated Doji. Ryuga broke free from his pod and appeared before Gingka, challenging him and his beyblade, Pegasus, to battle.

After, training in a volcano, Ryuga fought back the dark power and suceed in controlling L-Drago, resulting in L- Drago Meteo, since it is also closely related to a metor.

As the Star Fragment fell, a piece of it struck Meteo L-Drago, transforming it into L-Drago Destructor. 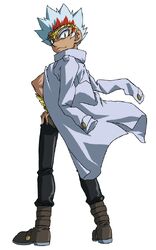 Ryuga aka the Dragon Emperor.
Add a photo to this gallery

Retrieved from "https://villains.fandom.com/wiki/Ryuga?oldid=3581619"
Community content is available under CC-BY-SA unless otherwise noted.