Alien Criminal
Ryugu Tamatebacco is an oarfish-themed Gangler Monster and is the main antagonist in episode 28 of the 2018 TV series Kaitou Sentai Lupinranger VS Keisatsu Sentai Patranger. He is also equipped with a shark fin-like treasure called Plonge.

Ryugu Tamatebacoo's head is a white skull with red hair, his body is a blue oarfish head on the right, his red and blue limbs are oarfish like, his gangler safe was on his black belly, his weapon the Shumokku Nokogilance is a green spear with the white blade tip that resembles a sawfish's nose and jaw.

Ryugu Tamatebacco made his first appearance accompanied with a couple of Porderman where he'd transformed a young student into an old woman when he spotted Kairi and Umika's dad he and the Pordermen chased after the two. However the police stopped him in his tracks so he'd battle them instead. He'd accidentally aged one of the Porderman into its senior years, but when Noel was about to open fire on Ryugu he used the treasure's ability to dive in the ground to avoid the attack, but attack Noel at the same time after that he retreats.

A while later he was at his home base until it was invaded by the thieves, so he battled the intruders. However when Lupin Red acquired the Magic dial fighter he was no match for it. Once he was sent flying out of his hideout Noel pinned Ryugu down to the ground while he gained access to his safe (which his password is 3-1-4) and got Plonge (which translate as "Plunge") shark fins and without it in his safe Ryugu won't be swimming across the surface anytime soon after that he was taken out by the thieves causing those that's been turned into a senior were reverted back to their youthful selves including a Porderman.

However thanks to Goche Ru Medou he's been enlarged and now he's battling Lupin Kaiser Magic after that he was then destroyed by this finisher called Good Striker: Show-Stopper Illusion. 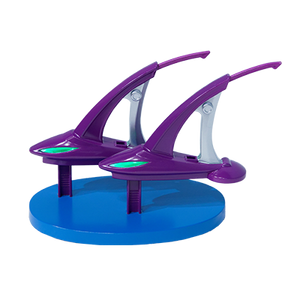