The Mysterious Man
Guardian of the Paradise
Kamen Rider Eden

Leader of Cult of Eden (formerly)

Destroy the current world and recreate it as a paradise (purported).

Bring his wife back from the dead and create a virtual paradise for her (actual).

His real name is Rihito Isshiki. He is the former leader of Thinknet, a cyber-terrorist cult which seeks to use nanomachines to bring about doomsday and assimilate the world's population into a virtual reality known as the "Paradise Guardia". By inserting the Eden Zetsumerise Key into the Eden Driver he received from Azu, S has the power to transform into Kamen Rider Eden.

He is portrayed by Hideaki Ito.

S was once a programmer for the company Nano MIRAI named Rihito Isshiki. When his wife Akane Tono fell from a fatal disease, Rihito attempted to cure her using nanomachines. However, during the Daybreak Town Incident, the Ark hacked into the nanomachines and killed her, leaving Rihito stricken with grief.

Seeking to bring his wife back by any means, Rihito downloaded her consciousness into a virtual database he created and converted himself into a being made of nanomachines soon after. He founded Thinknet under the alias "S" and began attracting followers by preaching of his plans to remake the world into a paradise using nanomachines. Among those drawn to his movement was ZAIA Enterprise Japan's managing director Makio Nodachi, who leaked the schematics for the ZAIASpec to S and Thinknet. With the schematics, Thinknet was able to produce modified ZAIASpecs that enabled their followers to log onto the Thinknet website and assume virtual avatars, as well as transform into Kamen Rider Abaddons. Secretly, S's real goal was to create a virtual paradise simply for himself and Akane to live in, and he did not care for his followers.

After Azu's plan to manipulate Horobi and Aruto into instigating a war between humans and HumaGears failed, she approached S and handed him the Eden Driver, noting that Ark would be reborn. Transforming into Kamen Rider Eden, S declared he would destroy the world as it was and recreate it as a paradise.

S would eventually put his plans into motion, setting up a modified Thousand Jacker with a doomsday clock and sending his followers to spray people all across the world with gas that contained nanomachines to forcibly assimilate them into his virtual reality. At noon, S activated the timer on his modified Thousand Jacker's doomsday clock to destroy the world in one hour and assimilate everyone into his virtual paradise. Before that at the beginning of the day, S sent a message to Aruto Hiden challenging him and announcing his plans. Aruto transformed into Kamen Rider Zero-Two and attempted to stop him, but was defeated by S as Kamen Rider Eden and had his Zero-Two Driver stolen from him by S to be used in S's plan to bring about doomsday. Aruto attempted to transform into Zero-One to continue the fight but before he could Eden knocked him out of the building with a powerful energy attack. With the Zero-Two Key in hand, S inserted it into the Thousand Jacker and used it download Zea's data into it.

As the clock reached its midway point, S proclaimed to his followers that the old world would soon be destroyed and that all of them would be the "chosen ones" brought into paradise. Once Zea's data was done downloading into it, S removed the Zero-Two Key and replaced it with a blank Key to create the Hellrise Key from. It was then however that Aruto Hiden entered the arena to try to stop him again, transforming into Kamen Rider Zero-One Metalcluster Hopper. S in turn transformed into Kamen Rider Eden once more to face Zero-One again. With his intangible nanomachine form, Eden easily got the better of the Rider and initially overpowered him. However, using the metallic grasshoppers that made up Metalcluster Hopper, Zero-One was able to eat away at Eden's nanomachines and cripple him. Not willing to give up just yet, Eden grabbed the modified Thousand Jacker and used it to perform a powerful attack that leveled the arena and surrounding area, killing many of his own followers in the process. While Aruto managed to survive, S had mysteriously disappeared.

In fact, as both Aruto and Thinknet soon discovered, S did not intend to lead them into paradise but rather leave them in a ruined world while S and Akane, along with those infected with the nanomachines, would be the ones chosen for S's virtual world. Aruto Hiden managed to track his location to a church, where S attempted to insert the Hellrise Key into the modified Thousand Jacker as the final component to bring about doomsday. Confronting S about his true ambitions, Aruto wrestled the Hellrise Key from him and used it to transform into Kamen Rider Zero-One Hellrising Hopper. S became Kamen Rider Eden to face him a third time, but with his berserk new form, Aruto was able to overwhelm Eden and defeat him, knocking S out of his transformation. Because of the malicious nature of the Hellrise Key however, a berserk Aruto attempted to finish off the untransformed S. He was stopped by Is as Kamen Rider Zero-Two, who had regained her memories from a backup in Satellite Zea and was able to get Aruto to de-transform.

Aruto then confronted S with the truth that he had only sought to remake the world in order to revive his wife. Realizing that his motive was a selfish one, S decided to abandon his plans and let his wife rest in peace. Before S could stop the countdown, he was attacked by Bell, who was now leading the remaining Thinknet forces and revealed he knew of S's true motives. Declaring he would finish S's scheme and become the originator of the paradise S had originally envisioned, Bell stole the Eden Driver from him and using it to become Kamen Rider Lucifer.

In an effort for redemption, S then ran off to shut down the Thinknet servers while Aruto and Is became Zero-One and Zero-Two to fight Lucifer and his forces. Along the way he was confronted by Buga, but Horobi held him off and enabled S to reach the master controls. He then entered the digital world and was reunited with his wife Akane, meeting her again in a digital recreation of their wedding hall. The two were presumably lost when Thinknet's servers were all shut down.

S is a very charismatic and mysterious individual, able to draw millions of people from around the world to his cause. He preaches of creating paradise and is able to inspire fervent loyalty in his followers, but despite his purported utilitarian goals S's true motive is something much more personal, to create a virtual paradise for him and his wife to live in. Having lost his wife in the Daybreak Town Incident, S became maddened by her death and the role he had inadvertently played in it, seeking to correct it and restore her to normal by any means necessary. While he deeply cares for his wife, S does not appear to pay much regard for the lives of others, callously digitizing people to populate his virtual realm without considering their own free will. At the same time, S was also adverse to some of the more sadistic behaviors displayed by his followers in Thinknet, and sought to leave them in the ruined world rather than bring them with him into his paradise. 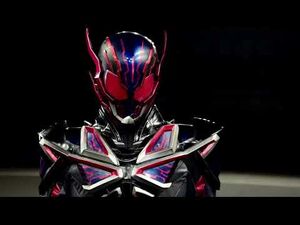