All the skills that Samus Aran had in Super Metroid

Eliminate the Metroids.
Spread the danger of X Parasites (all failed).

The SA-X is the main antagonist in the video game Metroid Fusion. Throughout the entire game, the SA-X searches for Samus in the Biologic Space Laboratories in attempt to kill her.

SA-X is an exact copy of Samus Aran, or at least her suit. It's unknown what SA-X really looks like underneath the armor, but it does have a rather creepy, expressionless, zombie-looking face with missing eye pupils. Its gender is also a mystery.

The SA-X is an X Parasite mimicking Samus. After Samus' first encounter with the X on the planet SR388. When that happened, her Power Suit was infected by the parasites. The Galactic Federation surgically removed infected portions of her suit and sent the pieces to the Biologic Space Laboratories research station's Quarantine Bay. Once there, the X inside the infected suit parts seemingly combined and transformed into a copy of Samus in her standard Varia Suit (it should be noted in SA-X's first closeup, the helmet and upper torso seem to be a shade of purple). The SA-X used a Power Bomb to escape the Quarantine Bay, breaching the capsules containing X-infected specimens from SR388 and starting the infestation. From then on, the SA-X roamed the station, occasionally crossing paths with Samus and attacking her on sight. As it had the use of the Ice Beam, Samus originally stood no chance against it because the Metroid vaccine had left her with an extreme vulnerability to cold. Thus, whenever Samus encountered the SA-X, she would have to hide or run from it.

The copy was first seen in-game when Samus was traveling to Sector 1 to try and stop the X infestation from spreading. As Samus went down the elevator, the SA-X blew up one wall of the elevator room, walked into the room, and paused for a few moments; it is here that a close-up of its face could be seen. The SA-X then jumped over the elevator shaft, destroyed the room's hatch with a Super Missile, and left the room through the destroyed hatchway.

The second encounter took place in Sector 2 after Samus downloaded the Bomb data. As soon as she left the Data Room, an explosion shook the surrounding area, immediately after which the SA-X's footsteps could be heard fading away into the distance. When Samus dropped down to the lower part of the room, she discovered that the hatch she had come through had been badly damaged and rendered totally inoperable. Samus' first physical encounter with the SA-X also occurred in Sector 2, shortly after the defeat of Zazabi. Attempting to return to the Navigation Room, Samus discovered another damaged and completely impassable hatchway. Using her Bombs, she was able to open a hole in the floor nearby and dropped into a room with two sections. The SA-X was in the bottom section, but it soon left the room.

The next encounter, this time in Sector 6, occurred when Samus discovered a wall of Power Bomb Blocks that she could not pass, as she had not yet recovered her Power Bombs. The SA-X entered the room almost immediately afterward, forcing Samus to hide in a passageway under the floor; it then used a Power Bomb of its own to destroy both the wall and a significant portion of the floor. Once the SA-X was gone, it was safe for Samus to follow.

The third actual encounter took place in Sector 5 after Samus had downloaded the Power Bomb data. While using Power Bombs to get around blockages created by the X, Samus entered a portion of the sector she had not previously explored. Almost immediately afterward, the SA-X suddenly entered the room right behind her. To escape, Samus had to jump over a pillar and use Bombs or a Power Bomb to find a secret passage in the wall behind it. Unfortunately, if Samus set off a Power Bomb, the explosion would destroy the pillar behind her, revealing her position to the SA-X and alerting it to her presence. It would then run over to the wall and fire Ice Beam shots until Samus left the room. The SA-X showed up once again in Sector 2 shortly after Samus activated the Auxiliary Power Station. While traveling towards the source of the vegetation choking the Main Reactor, Samus dropped into a large chamber only to discover that the SA-X was there waiting for her. As she still lacked a way to damage it, Samus was left with no choice but to run from the SA-X until she could reach a safe hiding place, though she could shortly freeze it by hitting it with Ice Missiles.

When Adam requested that Samus destroy B.O.X., he warned Samus that the SA-X was hunting for her in Sector 6. After destroying B.O.X., she reached the Restricted Laboratory and discovered the Federation's secret Metroid breeding project. Following the sound of the explosions rocking the lab, she found the SA-X attacking infant Metroids, though it was quickly overpowered. However, the SA-X's assault had activated the emergency fail-safes—moments after Samus escaped, the Restricted Area was jettisoned from the research station and exploded. Samus believed that the X mimic was gone for good.

However, her feelings of victory were short-lived. After the incident, Samus' gunship's computer told her that there were no fewer than ten SA-X because the X reproduce asexually. By this time, the Galactic Federation had taken an interest in the SA-X, believing it to have strong potential. The computer went on to tell Samus that the Federation did not expect her help in containing the SA-X, which is why they had stopped sending her support data.

Once the computer was revealed to have Adam Malkovich's personality, he told Samus to go to the Operations Room and adjust the station's orbit path to intercept SR388. Just as Samus reached the Operations Room, another SA-X ambushed her in an attempt to stop her from destroying the station. By this time, Samus had recovered almost all of her lost abilities, including those she needed to damage the SA-X. Therefore, she was able to finally confront her doppelgänger, and after a fierce struggle, Samus emerged victorious. After this, SA-X, in its Core-X form, flies away.

Once Samus reaches the Docking Bay where her gunship should be, she instead encounters an Omega Metroid. The Omega Metroid attacks Samus, leaving her with an ounce of her energy left. Just as the Omega Metroid is about to deal the finishing blow, SA-X, which fled after Samus defeated it, re-appears and transforms back into its Varia Suit form. It then uses its Ice Beam against the Omega Metroid, causing it to back away from Samus. Once the Metroid reaches the end of the room, it retaliates and attacks the SA-X, draining what little vitality it had recovered after its battle with Samus. The SA-X then reverts to its X form and allows Samus to absorb it, completely restoring her energy and granting her both the Ice Beam and the Omega Suit. Once Samus defeats the Omega Metroid, her gunship returns, allowing her to escape. The BSL station then crashes into SR388. All of the remaining SA-X were supposedly destroyed along with the planet and the rest of their kind.

The SA-X uses the Ice Beam, Screw Attack, and sometimes Missiles (it fires them either when Samus is frozen or when Samus hangs from a ledge out of reach) against Samus. Only the Charge Beam can damage it—Samus can temporarily freeze it with an Ice Missile, but it causes no actual damage. The SA-X has a tendency to go into a Screw Attack as a counter-attack whenever Samus lands a blow; if Samus tries somersaulting into it with her own Screw Attack, both will take damage. As the SA-X takes on more damage, it begins to look more and more distorted; once it cannot take any more damage, it falls to its knees (much like Samus herself at the end of Super Metroid).

When the SA-X kneels down, it stops fighting. When Samus approaches, though, it transforms into a gigantic beast, that appears to be a sort of mutated Hornoad-like creature. One possible explanation for this form is that it was a fusion of every host the SA-X had previously infected, namely a Hornoad and Samus herself; this would explain why the form looks like a giant mutated Hornoad with a swollen Arm Cannon on one of its arms. Either way, the SA-X then jumps around the room trying to stomp on Samus. Ultimately, this tactic proves much less effective than when the SA-X was only mimicking Samus, as there are a couple of ways for Samus to avoid damage, as if Samus stands on the upper ledge in front of the Operations Room door, she can use the Wave Beam to shoot down through the floor, but the SA-X can't jump high enough to reach her. Alternatively, Samus can use the Screw Attack to somersault right through the SA-X, and although this won't hurt the SA-X, but Samus won't take any damage, either. In order to damage the SA-X, Samus must once again use the Charge Beam.

Once the mutated form is defeated, the SA-X reverts back to a Hard Core-X and attempts to both fly into Samus and hit her with the Ice Beam. Once Samus defeats the Core-X, the X inside retreats out of reach, eventually phasing through a wall and escaping.

SA-X is set to appear in Metroid Dread in a currently unknown role.

Despite having Samus' powers and, according to Adam, a high intellect, the SA-X is infamous for its incredibly low artificial intelligence in-game. In one example, the SA-X Power Bombs a floor above a Morph Ball tunnel, revealing Samus if she isn't quick enough; if Samus goes into the intact part of the tunnel rather than firing at the SA-X, it will Screw Attack to the top part and back down to the bottom in an endless cycle. In another example, if Samus stands on top of one of the various pillars she uses to hide from SA-X, her opponent, seemingly not being able to comprehend the fact that it needs to jump higher to reach Samus, will try to Screw Attack up to her but will always fall short, and it will keep trying the exact same method until Samus leaves its sight. When hiding from the SA-X after the station loses power, if Samus fires behind the pillar when the doppelganger turns to leave, she attracts its attention again, but it does not extensively search the room and will leave after it loses interest. However, it is possible that the SA-X believes it is something else other than Samus.

During the course of the game, the SA-X demonstrates the following abilities of Samus' Power Suit:

Why did SA-X Save Samus?

Why the SA-X seems to assist Samus is unclear, but it is likely that the X saw two threats: one with only a few strands of Metroid DNA (Samus), and a full-blooded, incredibly powerful Metroid (the Omega Metroid). The SA-X then attacked the greater threat; if this is the case, then it probably intended to finish off Samus after the Omega Metroid was dealt with. It is possible, however, that Nintendo was recreating the ending of Super Metroid where the Metroid hatchling, after growing a relationship with Samus (its "adoptive mother"), sacrifices itself to save her from the final blow. The SA-X may have done the same thing. 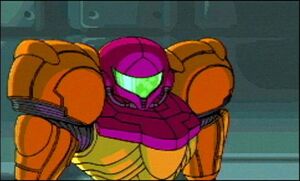 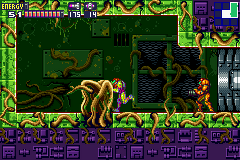 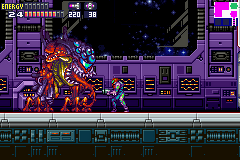 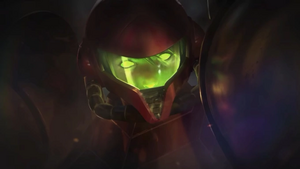 SA-X in the story trailer for Metroid Dread.