023
The Black Shuck
The Wolf

SCP-023, also referred to as the Black Shuck, is a Euclid-class object under the SCP Foundation's containment. It is a canine-like figure that causes death in the lives of those who make eye contact with it.

SCP-023 was originally one of the Great Shucks which also included SCP-1111-1 and were specially bred by the Unnamed Lords. These Shucks were selectively bred by the Lords to powerful and loyal creatures which would execute any order given to them by their masters.

SCP-023 was brought to the Foundation's attention after it attacked a church and killed a large number of the congregation.

Furing Incident 023-01, SCP-023 escaped its containment cell until settling in corridors in a Foundation Site, which became its new containment area.

During Incident 023-026, a Foundation scientist attempted to remove SCP-023's eyes and teeth to lessen the danger. SCP-023 managed to break away and briefly escape containment, killing nine civilians. SCP-023 was recaptured and the rest of its teeth were pulled.

Incident 023-27 occurred afterward where SCP-023 was given glass eyes to replace its lost ones. This resulted in the eyes gaining the same properties as the old ones, leaking molten glass, and causing the eyes to appear on all reflective surfaces at the site. SCP-023 once again escaped containment, but was recaptured. The death toll was catastrophic, and all reflective materials have since been banned from the site. Testing and experimentation on SCP-023 has been suspended indefinitely.

If an individual makes eye contact with SCP-023, either that person or a member of their immediate family will die exactly one year after the eye contact is broken. No patterns or preferences in victim have been observed. Attempts to terminate the individual and family involved have resulted in classified results, but most likely failed.

Corpses of SCP-023's victims are found to be "filled in" with dark ash, filling in open areas throughout the body such as the spaces in between systems and inside hollow organs. Tissues usually display evidence of being exposed to constant high temperatures.

SCP-023 is intangible and capable of phasing/burning through all matter to reach suitable locations. If not kept in a "crossroads" type setting, SCP-023 will continually move from location to location. This is what occurred during Incident 023-01.

Following SCP-023's eye sockets are required to be filled in with rubber fillings to prevent eye contact. However, SCP-023 seems to periodically burn through them, and they must be replaced if evidence of burning is observed. Replacements are to only occur at night and require personnel to not make eye contact while subduing SCP-023 and replacing its fillings.

SCP-O23 is a "shaggy" creature resembling a canine, approximately 1.5 meters tall at the shoulder. It has black fur and displays orange-red eyes. It used to have prominent fangs and teeth, but they have since been removed. 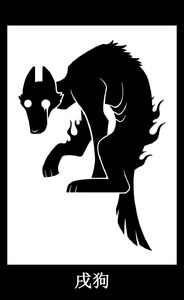 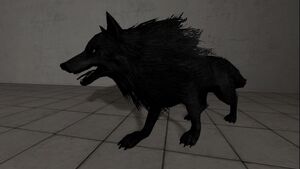 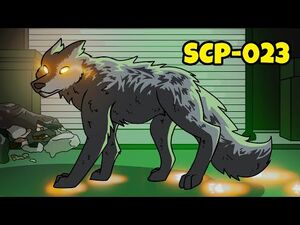 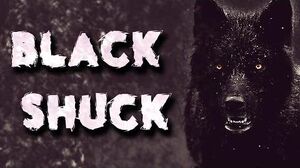 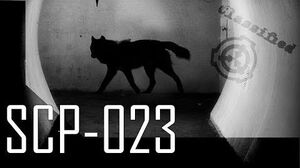