Have a contestant complete the game show without cheating.

SCP-024, also known as "The Announcer", is a Euclid-class anomaly under the SCP Foundation's observation. It takes the form of a game show announcer who appears within an unnamed building overseen by the Foundation.

If a group enters the building housing SCP-024, they are greeted by the announcer, who will introduce them to an unseen audience and inform them that they are to participate in a game show, and that the losers will never leave. The announcer then gives the contestants the option to either continue or leave. If they pick the latter option, they will immediately be expelled from the building.

It is then that the contestants are led to the actual game. The style, composition, and appearance of the game always changes in every individual play-through, but the game is always centered around a long, elaborate obstacle course that the contestants must navigate through. The rules also vary. Some play-throughs may only allow a single winner, while others encourage the creation of teams to win the game. More often than not, the obstacles seen in these games range from incredibly benign to extremely hazardous and life-threatening.

As the contestants attempt to negotiate the course, the announcer will continuously update their status and actively participate in the game, often giving advice, conversing with contestants, and adding new rules. As the game progresses, the obstacles become significantly more dangerous and difficult to overcome, and it is not surprising to have the entire pool of contestants succumb to the rigors of the obstacle course. If such an event happens, the announcer will express annoyance at the lack of a winner and the show will shut down, resetting only when a new batch of contestants enter.

Any attempts to break the rules will lead to the announcer summoning "studio guardians", who will take the contestant away, never to be seen again. If a person does successfully win, they will be presented with a random prize, and then ejected from the building. Any attempts to re-enter will fail, as an invisible barrier will prevent entrance. Anybody who survives the game but fail to win are left behind in the building, and are never seen again. The winner will receive a VHS tape of the game featuring the sound of a live studio audience cheering on the contestants, despite no audience being present during the game.

SCP-024 was discovered when a group of teenagers broke into the building. One teenager managed to win, and turned herself in to the police after being ejected. Her story was enough evidence for the Foundation to move in, and cordon off the building to prevent anyone from entering the game.

Due to the nature of SCP-024, the Foundation are unable to transfer it to a containment facility, so they must prevent anyone from being able to enter. To this end, five identical replicas have been erected around the compound in order to conceal its location. Several security teams are stationed around the perimeter to prevent anyone from entering, although only the leaders are informed which building contains SCP-024. The compound is sealed shut with blast-proof doors and reinforced walls. Nobody is permitted to enter the compound, with the exception of D-Class personnel, who are permitted to enter for research purposes. All researchers use the remote observation lab. Anyone attempting to enter the compound without permission is terminated.

During Test D523, a Foundation researcher managed to enter the compound, and conversed with SCP-024. The conversation centered around pop culture and information circulated through TV, indicating that SCP-024 has the ability to interpret TV signals. Eventually, the announcer realized that no-one else was going to participate and ejected the researcher from the compound. 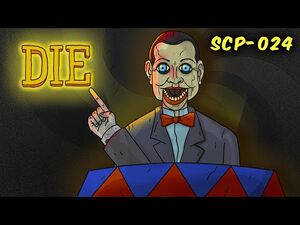