Leader of a Thuggee cult

Have her cult sacrifice one million lives in her honour, raising their goddess and ending the world (failed)

Brainwashing Cult Leader
SCP-029 is a Keter-class SCP contained by the SCP Foundation. She is an entity which takes the form of a pubescent Asiatic-Indian female and is the leader of the a group of Thuggee cultists (similar to SCP-1790), which refer to her as the "Daughter of Darkness".

SCP-029 is imprisoned in a containment cell behind a triple airlock, with floodlights installed inside due to SCP-029's vulnerability to light. No males are permitted to enter her cell, as any males within her presence will fall under her spell and become willing to kill to help her in her ultimate goals. As SCP-029 possesses the remarkable ability to turn any physical item into a weapon, no physical items are permitted within her cell, not even clothes.

The diary of William Sleeman, a British official involved in the destruction of the Thuggees, makes multiple references to a "Daughter of Shadow" being placed within the Thuggees in order to corrupt them and cause internal division and break them up. Presumably this was SCP-029, who did indeed cause the creation of a second Thuggee faith based around her.

A Foundation agent working in rural India discovered the existence of a Thuggee cult active in the area following an attempt on his life by the cult. The Foundation's investigation found that the sect believe that the "Kali Yuga" was upon the Earth, and now intend to sacrifice one million people to their leader, SCP-029, AKA the Daughter of Darkness, in order to raise their goddess Kali and end the world. After the agent was killed by the Thuggees, the Foundation were able to dismantle the cult and capture SCP-029.

During containment, the Foundation attempted to learn more about SCP-029, but this failed, as all attempts to interview her ended in the interviewer being either killed or converted. However, they did learn about SCP-029's weakness to light, which was used to help contain her, and that she can use literally any physical object to kill someone, although she is averse to shedding blood, preferring to kill her victims through strangulation.. They also learned that she didn't need sustenance to survive, as she was able to live despite killing all Foundation staff who tried to provide her with food.

In Incident 029-53b, Foundation researcher Dr. Ericka Bodeen objected to the fact that SCP-029 was not permitted to wear clothes (due to clothes being a physical object), claiming that not allowing her to cover herself up was inhumane. Dr. Bodeen was granted permission to deliver clothes to SCP-029, but was killed by her upon entering her cell.

Seven years after her containment, SCP-029's black pigmentation began to grow. When questioned, SCP-029 claimed that "my followers are on the move once more". Upon looking into these claims, the Foundation discovered that many members of the cult were still active, and were beginning an advance to continue their plans. The Foundation managed to locate them, and called in a tactical airstrike which eliminated the remaining cult members. During the bombardment, SCP-029 began screaming that they were "killing her children". After the airstrike, SCP-029's pigmentation stopped growing altogether, suggesting that the cult had been completely wiped out. 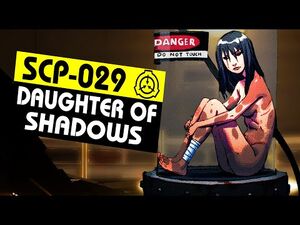