SCP-046-1, also referred to as the "Predatory" Holly Bush, is a Euclid-class object under the SCP Foundation's containment. It is a sentient, "predatory" botanical mass that lures in sick and injured prey, then proceeds to devour it.

SCP-046-1 is a botanical mass located in southwestern Kentucky, made up of various indigenous plant life including Quercus alba, Ilex aquifolium, Lonicera sempervirens, and other similar types of vegetation. SCP-046-2 is the land immediately around SCP-046-1 that serves as its primary feeding area, a circular area with a radius of approximately twenty meters from the base of SCP-046-1.

SCP-046-1 has the ability to induce hallucinations and dreams to prey within 50 kilometers of its base, and specifically targets animals (including humans) who suffer from potentially life-threatening or self-damaging physical or mental injury or illness. In the dreams and hallucinations, subjects report envisioning themselves lying near SCP-046-1 and all of their pain or illness being taken away; this occurs even in subjects who have no prior knowledge of SCP-046-1 or the Foundation. Subject will seek out SCP-046 until they are within SCP-046-2, where they will promptly lie down like in their hallucinations. Upon doing so, subjects will be rapidly attacked by the flesh-eating bacteria Staphylococcus aureus and a toxic fungal mold similar to Stachybotrys chartarum, the latter of which paralyzes the victim. The attack continues until the victim is completely decomposed and "eaten" by SCP-046-1. While it is unknown if SCP-046-1 grows as a result of this, precautions are taken to prevent SCP-046-1 from receiving prey. Investigation reveals that, while SCP-046-1 lures victims in with the promise of relief, the victims themselves must voluntarily lie down on SCP-046-2 for SCP-046-1 to take effect; involuntary subjects are not affected.

The land around SCP-046 has been purchased and cordoned off by the Foundation, with fences and traps laid around the perimeter. Security and research forces involved must undergo physical and mental health checks, and any evacuation efforts or injured parties must be steered clear of SCP-046-1's area of effect. In the case of a breach, trespassers are to be terminated before reaching SCP-046-2. If this does not succeed, efforts must be made to retrieve the bodies before they can be consumed. 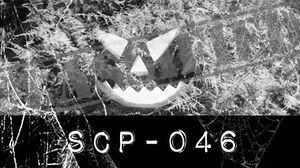