049
The Plague Doctor
The Cure
The Surgeon

Rid the world of "the Pestilence".

SCP-049, also referred to as the Plague Doctor, is a Euclid-class object under the SCP Foundation's containment. It is a humanoid figure that resembles a 15-16th century European Plague Doctor, with a black robe and a white-beaked mask.

SCP-049 was discovered in Montauban, France when the SCP Foundation were investigating some mysterious disappearances. They found 049 surrounded by the people he had turned into SCP-049-2. While the Foundation exterminated the 049-2, 049 took notes on what was happening, and then willingly surrendered to the Foundation. Under their custody 049 kept doing experiments with various mammalians which provided to him by the Foundation in order to keep him calm.

On April 16th 2017, when was being interviewed by Dr. Raymond Hamm--a doctor who spend a lot of time with 049 and considered him a friend--049 became agitated and attacked Hamm, killing him and turning him into a 049-2 in three hours, since security wasn't activated.

When 049 was confronted by SCP-343, an entity who claimed to be God and the creator of everything, 343 chastised 049 for killing people, including Dr. Hamm robbing his daughter of her father. 049 tried to explain that he was helping humanity, but 343 accused of killing his victims for no reason and that the pestilence he was trying to cure was actually the freewill.

343 then took 049 back to his past which 049 had forgotten. During the time of the black plague, 049 was just a simple poor man living in a village with his wife and daughter. Suddenly he saw an actual plague doctor riding a horse near his house before falling in front of him and succumbing to the plague. The man looked at the now dead doctor and had the idea to steal the doctor's garments and disguise himself as a doctor to scam people and gain money for his family.

He visited different regions and spread death, with people believing he was a real doctor, since he was somehow immune to the plague. After becoming rich he returned to his home to reunite with his family, but to his horror, found his wife had succumbed to the plague and was partially eaten, while his daughter soaked in blood, but was thankfully still alive, thanks to her immunity which she had inherited from her father.

049 then refused to go further and told 343 to stop. 343 realized that nothing he did would change 049's mind and stated that 049 came from the those dark places which even he couldn't see, before 049 froze as per usual, leaving the personnel to take him away.

SCP-049 is very well-mannered, respectful, and polite, so it makes little attempt at escape. It seems to truly believe what it is doing is for the greater good, stating that its cure is "most effective". It is unknown why SCP-049 believes that it must eradicate this "Pestilence", or what the "Pestilence" truly is.

SCP-049 is also extremely courteous and affable to both humans and fellow SCPs alike. It states that it does not like to speak because of the melancholy and pensive nature of the "victims of the Pestilence", and that they do not react well to conversation. This shows that it still has its victims' best interests in mind when performing its procedure.

SCP-049 is a tall humanoid figure that appears to be garnished in long black robes and a white-beaked mask. However, upon further investigation, it was revealed that these items are a part of SCP-049's physical body, being similar in biological structure to muscle.

SCP-049's touch is extremely lethal to humans, killing those that come into contact with it within minutes. SCP-049 then somehow produces a black bag filled with medical and surgical tools, then begins surgery on the victim, inserting several unknown chemicals into the corpse.

After a few minutes, the subject's vital signs will resume and the subject (now an instance of SCP-049-2) will begin to function normally, except any higher brain function. The victim will be rendered completely feral, violent, aggressive, and dangerous, and will wander until it encounters another human. It will then attack and kill the human before returning to its unintelligent and brainless state.

SCP-049 was once thought incapable of speech, but this was later debunked when it spoke in a male voice, saying that while it can speak, it simply prefers not to. It explained that it seeks to eradicate "the Great Pestilence" from the world, which is assumed to be the bubonic plague. However, this is unconfirmed, as SCP-049 senses the "Pestilence" in subjects who do not possess the disease, and has not seen it in some other human subjects. SCP-049 believes it is doing a great service by "curing" the infected. When confronted about the effectiveness of the cure, SCP-049 would not continue.

SCP-049 is kept in a secure holding cell. Should personnel want to converse with it, it must be removed by a Level 2 or higher personnel and sedated before being placed in an iron collar and accompanied by a minimum of two security guards. During a containment breach, SCP-049 came into contact and had conversations with SCP-035.

In the "End of Death" continuity in which a resurrected O5-11 of the O5 Council killed the embodiment of Death causing everyone to gain immortality, 049 became agitated when he saw that his touch couldn't kill anyone anymore, and fell in a state of depression, since he considered his death touch to be integral to his "cure". The Foundation tried to elevate his mood by allowing him to help personnel in the site's medical center, but this didn't completely help 049 with his depression.

During "There is comfort in not seeing, there is bliss in not knowing." Where SCP-096 encountered 049, SCP-049 felt a large amount of sympathy for the creature, viewing it as a suffering, helpless and scared child. Despite telling the pale humanoid creature he could not save it, he said he can help it. SCP-049 then injected something to calm 096, in 049's view. They were both underneath a black tree, with mirror shards hanging from the branches, as 096's crying grew louder and intense. 049 reflected on his own life and questioned whether or not if he was a doctor, 049 also noticed that the "child" had several cuts around it's body with blood leaking. He was going to find a syringe to staunch the flow, but 096 ran and hugged him. While in reality, 096 and 049 sat down together, until 049 was dragged out.

SCP-049 is a major enemy in SCP - Containment Breach. It will wander the halls and elevators, killing and "curing" any human it comes across, including the player. While it is not especially fast, it can be a major obstacle if it is blocking a path or pursuing the player. Touching the Plague Doctor will kill the player, and they will wake up a reanimated corpse, killed by a security guard. However, SCP-049's touch is not lethal when wearing SCP-714.

In the Secret Laboratory, one of the players has the role of controlling SCP-049 and murdering the other remaining players. Out of all the SCPs in-game, SCP-049 is the slowest. SCP-049 is capable of killing anyone instantly if he gets in range to use his death touch. He can also can create "zombies" with his  victims. The zombies are also known as SCP-049-2. They are follow SCP-049 and protect him from other players and can turn them into SCP-049-2 as well. SCP-049 can take more shots than other SCPs in-game. The Tesla-Gate could potentially kill SCP-049 or significantly damage him.

SCP-049 will be added in the Unity Remake possibly in 2019 or 2020. Till then, no one knows what SCP-049 will look like and what will his future powers possibly be.

SCP-049 was set to appear as a playable character in Indie Game Battle before the game's cancellation.

In this non-canon, fan-made series, there is a set of two videos that expand on SCP-049's purpose and background. His aim to cure "the pestilence" remains in this video series in the same way as the standard SCP mythos. SCP-049 also discusses his encounter with SCP-035, which is a very different version of the same story that SCP-035 gave in its respective video within the series. SCP-035, much like in the original mythos, can speak many languages, but it's true language is not comprehensible by humans.

In the second video featuring SCP-049, he is interviewed by a Foundation member named "Jacobs", at the end of the interview, he intends to sacrifice himself to the SCP. Right as SCP-049 is about to touch Jacobs and "cure the pestilence", SCP-049 withdraws himself and doesn't touch Jacobs, explaining that "the pestilence has receded from him", and that Jacobs has a different fate in store for him.

In another video of the same series - a video about SCP-343 - SCP-343 states that "a darkness follows" SCP-049, possibly hinting "the pestilence" that SCP-049 speaks of is something that's a part of the latter, rather than something others are infected with.

SCP-049 as it appears in SCP - Containment Breach. 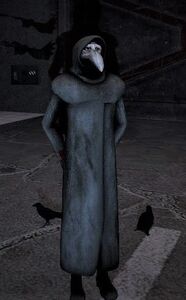 SCP-049 as it appears in SCP: Secret Laboratory. 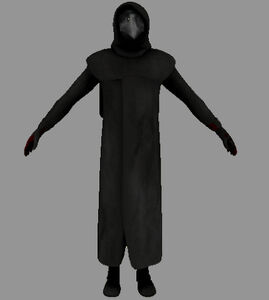 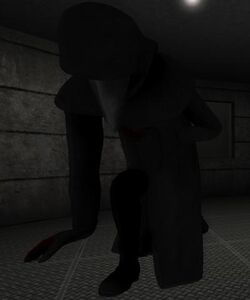 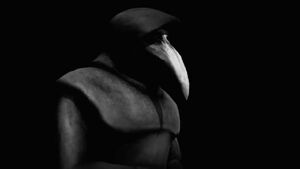 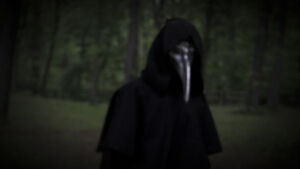 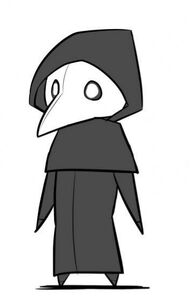 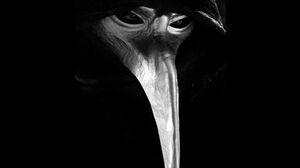 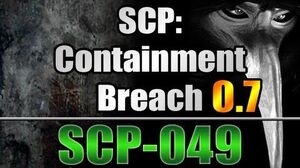 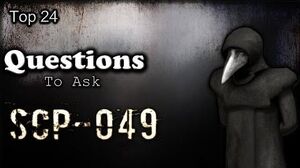 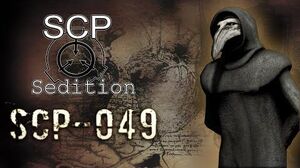 Retrieved from "https://villains.fandom.com/wiki/SCP-049?oldid=4118675"
Community content is available under CC-BY-SA unless otherwise noted.