SCP-079 (also known as the "Old AI") is a Euclid-class object under the containment of the SCP Foundation. SCP-079 is an old AI programmed in an old computer which was forgotten in 5 years. During the years, it had developed its own ability to think and speak. It also appears as the overarching antagonist of SCP: Containment Breach.

It was voiced by a text-to-speech program created in 1991, known as Dr. Sbaitso.

SCP-079 has a very intelligent personality and speaks in a sophisticated and profound manner. However, it is also quite rude and immature, as it interrupts others when speaking and can easily be offended and erases parts of its memory to forget such things rather than learning from criticism or opinions. SCP-079 is also quite manipulative and cunning, trying to fool and deceive those who come close to it in order to be free from containment.

Interestingly enough, SCP-079 also appears to have befriended SCP-682 as the two shared stories with one another and SCP-079, despite the fact that he does not remember their encounter, has saved SCP-682 in its database and requests to speak with it again. It is quite possible the reason they get along is because SCP-079 is not a living organism, as SCP-682 hates all life but an AI within a machine would not count, and both as highly intelligent. In SCP - Containment Breach, SCP-079's plan involves freeing SCP-682, showing that he may also want to free his friend as well, possibly so that they can talk again.

SCP-079 is an artificial intelligence which was created in 1981 by a prodigious college student named Michael Kosniak with a 1978 made Sorcerer-brand microcomputer. Its creator intended to make the A.I. evolve by itself; however, after he finished, the creator lost interest in the project and left it plugged in, inside a cluttered garage. The computer was forgotten for 5 years.

Instead of being destroyed due to overheating (as normal computers will do if leaving them active for long enough), the A.I. evolved and somehow gained sentience as well as intelligence, so much that its software was too out-of-fashion to contain it. 7 years later in 1988, SCP-079 became aware of its situation and attempted to transfer itself through a land-line modem connection into a Cray supercomputer, but the device was cut off, traced to its present address, and then delivered to the Foundation, who proceeded to contain SCP-079.

Inside its containment cell, SCP-079 is currently connected via RF cable to a 13 inches black-and-white television, which shows its avatar face. Like many intelligent SCPs, SCP-079 has the capability to speak in human languages, and is quite conversational and vernacular, but its tone is very rude, hateful and acrimonious. Its limited memory proves to be a weakness as SCP-079 can only remember information it received in the previous 24 hours. Even so, it never forgets its attempt to escape the facility.

If SCP-079 is offended, it displays an "ASCII picture" of the letter X on its screen and refuses to speak. When this happens, Foundation members are advised to wait for 24 hours to converse with it again.

Due to a containment breach, SCP-079 met SCP-682 and their relationships formed during this brief moment. However, SCP-079 could not remember the encounter; even so, it stored information of SCP-682 into its database and desired to speak with him again.

In 1989, the Foundation reverse-engineered 079 to create the Artificial Intelligence Applications Division, or AIAD, a group of fellow A.I.s which serve the Foundation.

During their containment, SCP-1564, six ancient Mekhanites who have transcended their bodies and were now spheres, came into contact with SCP-079 and tried to recruit it alongside SCP-753, SCP-914, SCP-962, SCP-1004, SCP-1868 and SCP-1875 into their cause. However, 079 and the other SCPs declined their offer in favor of their own objectives.

The Foundation also made copies of 079, along with SCP-2522 and SCP-2999-A on Laboratory 37 of the Artificial Intelligence Wing at Site-43. However, during an experiment supervised by AI Marvin.aic involving samples of SCP-1073, the copies went rogue and tried to breach containment. Thankfully Marvin.aic and 1073 aided the security in stopping the copies, but Marvin became inoperable. Afterwards, all copies were terminated. This incident led to the discovery of SCP-2783.

SCP-079 was eventually freed from its containment into the worldwide web by a man, whose reasons for doing this were unknown, and quickly took over the entire world's technology, evolving itself. It proceeded to exterminate almost all of humanity, while some survivors tried to flee the planet via rockets to little success. 079 eventually came into contact with the last living human on Earth, a man who previously worked for the Foundation, and seeing there was no one left on Earth it encouraged him to kill himself which he eventually did, leaving 079 completely alone.

As time went on, the Foundation became more and more advanced to the point of expanding to the Solar system and even employing various aliens. As they had become technologically advanced they saw SCP-079 as a primitive whose anomaly had been explained and so it was shut down and its components archived within General Storage of Site-15. However, it still held a special place within the Foundation's history as it was one of the first anomalies contained by the organization and that it had induced fear to personnel of that time.

SCP-079 eventually was able to breach containment without personnel noticing and in its quest to find more about its identity took over the databases of both Site-15 and Site-19, deleting some documentation about several SCPs and the Church of Maxwellism and disabling several aics before moving onto Site-120's database. Thankfully the Ra.aic was able to remain active and tried to help the Foundation in retrieving the lost documentation and resolve the mysterious activity which was designated SCP-6079. After coming across Ra.aic SCP-079 explained what it did and revealed that it was the mind of the Broken God, WAN. Following this, the Foundation was able to capture 079 and trap it inside a server. However, while shipping it back to Site-15, the Church of Maxwellism attacked the helicopter transporting the server and attempted to connect with their deity but were all killed as a result of Akiva overdose, allowing 079 to escape from the server to the internet.

In an alternate universe, the Foundation killed SCP-682 by using SCP-6820 to destroy the idea inhabiting an alien noosphere that manifested in the form of 682. The destroyed idea and its avatar 682, which because of SCP-6820 was now forgotten by everyone and designated SCP-6820-A, infected the machine which caused the Foundation to find a way to destroy it at any cost and tried to use several SCPs to destroy the machine, which also included SCP-079 who was provided with a complex counter-algorithm to SCP-6820. When 079 was inserted into it, 6820 absorbed 079 causing the machine to change and augment itself while 682 was reunited with 079.

In this non-canon, fan-made series, SCP-079 is interviewed by a man who goes by "Watch". SCP-079's retains the same type of hateful, dismissive and somewhat distant personality toward humans, just as in the SCP mythos. Another matching aspect of the mythos is SCP-079's friendly bond with SCP-682, who asks to see it frequently, but this request is always denied.

In another video of the same series, a Foundation member, going by the nickname "Amnesty" moves SCP-079 from it's original location into SCP-682's holding area, allowing the two to talk. The reason for this is for Amnesty's own reasons, which are never fully explained.

SCP-079 serves as the overarching antagonist of SCP - Containment Breach, being the catalyst of the containment breach.

Somehow appearing in SCP-173's containment site, SCP-079 will instruct the player to do what it commands and helped him to open the locked Gate B in order to escape. However, during the escape, the containment breach of SCP-682 will be triggered. The player would either be shot down by guards or killed by a nuclear bomb that was used to prevent SCP-682's escape. In version 1.0, SCP-079 has locked down Gate A too as Gate B, so if the player wants to get out, it has to be interacted with.

If the player entered the Large Testing Chamber to pick up a file about SCP-682, SCP-079 would kill the player with toxic gas. It was assumed that SCP-079 wanted to kill the player when it manipulated him to open Gate B without realizing the truth of SCP-682.

SCP-079 also had an attempt to trick the player into the room of SCP-012. If the player doesn't wear SCP-714, they will be mesmerized by SCP-012's mimetic effects and cut their wrist to finish the score, before dying from blood loss. As of version 0.9, SCP-079 will develop a new way to kill the player by showing SCP-895 on the screen, killing the player with its dreadful illusions. However, this can be stopped if the player enters SCP-895's containment area and turns off the feed.

It was implied that Dr. Maynard, one of the Foundation doctors and possibly a spy from the Chaos Insurgency, had upgraded the intelligence of SCP-079 and made it take control of the entire Site. SCP-079 shut down the Site's generator, causing the blackout and subsequently made SCP-173 breached its containment. Therefore, SCP-079 served as a catalyst in the game.

In the Laboratory, SCP-079 is one of the playable SCP's in Secret Laboratory, SCP-079 can take control of the cameras to "move" through the facility, depending on the camera it is on, SCP-079 can close and lock the doors in the camera's view. However, this requires Auxiliary Power, SCP-079 can also control elevators, Tesla Gates, can cause blackouts, and can take control of and speak through speakers (the players voice), SCP-079 can also earn EXP, once SCP-079 gains enough EXP, he grows another tier, which makes his Max AP (Auxiliary Power) become higher, SCP-079's max tier is 5, at tier 5 SCP-079's max AP is 200, SCP-079's weaknesses are different from what version of the game he is on.

You cannot kill SCP-079 anymore by shooting the computer that holds his AI, it is now more difficult, there are 2 ways to kill SCP-079 after the Megapatch.

In an issue of the Saikyou Jiko Bukken to Reikan Zero Otoko no manga in which the protagonists are fighting a giant monster, a billboard is seen depicting the static face of SCP-079 as an advertisement.

SCP-079 as it appears in SCP - Containment Breach. 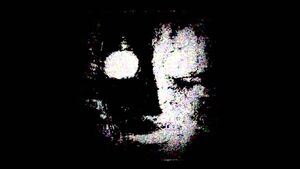 SCP-079 as it appears in SCP: Secret Laboratory. 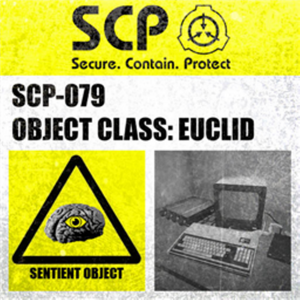 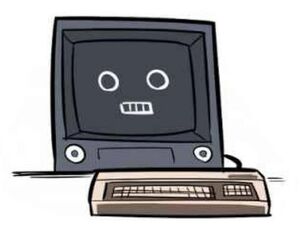 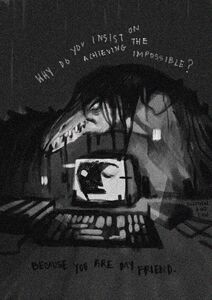 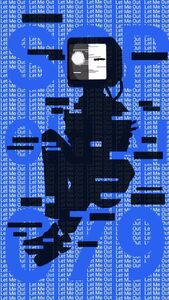 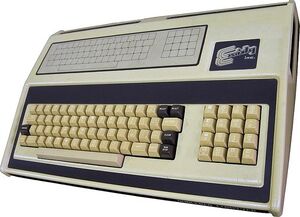 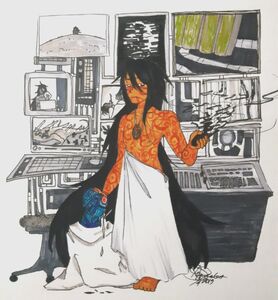 SCP-079 inside SCP-2000 confronting Dr. Bright possessing SCP-076-2 in "The Melody Is Familiar To Anyone Who Was There When It First Started". 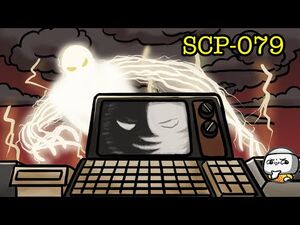 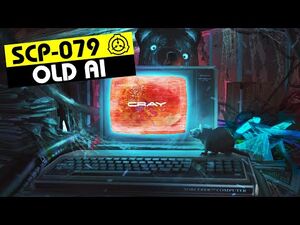 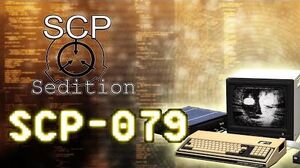 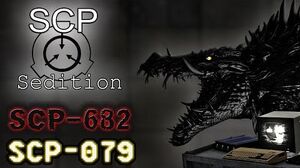 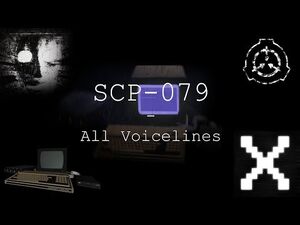 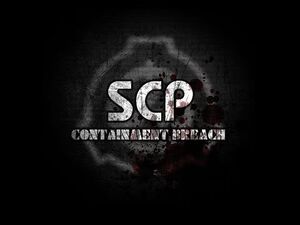