Pulling victims into an undisclosed ocean.

Attack those who know of it.

SCP-1128, also known as The Aquatic Horror, is a Euclid-class SCP is documented by the SCP Foundation. The SCP cannot be caught due to the complicated location-jumping nature of the creature.

SCP-1128 is a sea monster that only manifests to those who know of it, it can attack subjects who are immersed in nearly any amount of water.

The true appearance and origins of SCP-1128 are unclear. Descriptions of the SCP are meant to be limited or avoided entirely, as only those who know of SCP-1128's existence will be attacked by it, though this can be counteracted if a subject's memory is erased of the info. It is said to mostly resemble a gigantic shark.

If any information of SCP-1128 is fully described verbally or through visual depictions to someone, that person will be affected, but will the behavior of the subject won't alter in any way, though some subjects may suddenly avoid activities that involve being submerged in water. Once a subject that fully knows of SCP-1128 is submerged in water, they will then be attacked by the SCP. Some cases show subjects returning to the surface in a panic, with others being taken under and never seen again, with their bloody remains floating to the surface.

Subjects who survive an encounter with SCP-1128 describe being transported to an ocean. It is unknown which ocean this is, as the Foundation redacted this information. Strangely, wireless communication devices attached to subjects dealing with SCP-1128 seem to work just fine, allowing the Foundation to understand where SCP-1128 takes its victims to. In one experiment involving a D-class, the subject sees SCP-1128 consuming an entire whale in just one bite, then turns to attack the D-class itself.

SCP-1128 can only attack its victims through water, as the SCP can't get to someone if they are submerged in any other liquid.

Being a monstrous, aquatic sea creature, the SCP does not communicate in any way, and only shows an interest in brutally attacking others, as well as feeding. 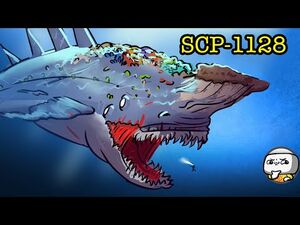 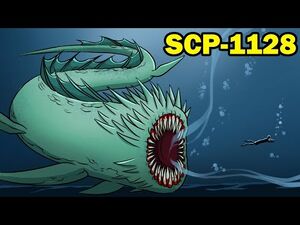