Torture any driver who ignored her requests (currently).

Visit her own grave by making drivers she encounters to give her a ride (formerly).

SCP-1337 (also known as The Hitchhiker due to her former nature, born Mary Talish) is a Safe-turned-Euclid classed SCP overseen by the SCP Foundation. Originally a harmless ghost of a murdered teenager, she became violent and vengeful due to an arrogant SCP Agent attempted to terminate her by destroying her homeland. After going mad, she would attack any passen-by who ignored her.

SCP-1337, born Mary Talish, was a teenage girl who was abducted, tortured, and then sacrificed by a cult. After her tragic death, the ghost of the girl has haunted a piece of road named "1337-Alpha" by the foundation, appearing every month on the 19th. She originally looked similar to an alive girl, with blond hair, blue eyes, and wearing a sweater, a button up shirt, and a skirt.

The ghost, saying she was lost, always asked a nearby driver to drive her home (called "Site 1337-Delta" by agents). During said ride, she would ask the driver to first stop near her grave, which is dubbed "Site 1337-Beta" by foundation members. After leaving, she would vanish, and then leave her sweater (nicknamed "SCP-1337-Gamma") for the driver to find, which would make the driver want to give it to the family on impulse.

Any attempt of containing the sweater has met with failure, as the sweater went missing by May 19, the date of when she was murdered. Once, ignoring her completely or going through the hitchhiking routine with her would not result in any violent action. To keep the story in secret, the Foundation persuaded the girl's parents to become E-Class Agents and hand over control to Dr. L****. However, the doctor commanded the deaths of the agents and destroyed Site 1337-Delta without permission in a attempt to get a promotion by decommissioning SCP-1337. Instead, he was met with a demotion for his actions and was not reassigned, under fear that the ghost would target him next.

3 years after the event, no signs of SCP-1337 was found and she was believed to be neutralized until ten years after the event, when Dr. L**** was slain by SCP-1337 in the same way that Mary Talish was murdered. Since then, SCP-1337 became far more deadly, both have extended her territory to every backroad of her hometown, and changed appearance, now having her eyes missing as if gouged, and has ripped and bloody clothing which conveniently shows the gaping hole where her heart was ripped out.

Now, the cost for ignoring her would be far more bloody, having the specter warp into the backseat and torture the unlucky soul to death. After the murder of Dr. L****, SCP-1337 has been re-added into the Euclid class, and every 19th, each and every road (now all named 1337-Alpha), are patrolled relentlessly for signs of SCP-1337.

If she is to be spotted, a D-class is inserted into a remote controlled vehicle and rode to where she appeared, where the D-class would pick her up and drive them both to Site 1337-Delta, the driver most likely being found dead. Any new tricks the phantom is starting is also to be reported instantly. 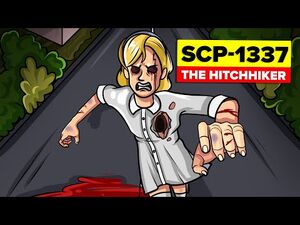 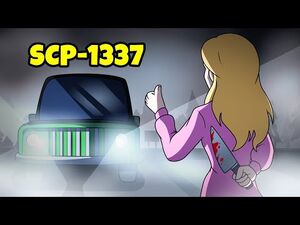