SCP-136-2, also referred to as the Naked Doll, is a Euclid-class object under the SCP Foundation's containment. It is a disfigured humanoid figure that manifests after the doll SCP-136-1 is viewed for more than twenty minutes.

SCP-136 was recovered from a children's bedroom in an abandoned house that was rumored to have been haunted. After an agent fell screaming from a second story window, SCP-136 was apprehended.

The first component of SCP-136, SCP-136-1, typically manifests as a small, crude clay, wood, metal, or cloth nude doll. The doll's appearance is usually female, but a small percentage of manifestations have been male. If damaged, the doll will vanish and manifest again in a different form in a one meter radius.

If SCP-136-1 is viewed for more than twenty minutes, the subject will report scary-sounding laughter fitting the gender of the doll's current manifestation. After the laugh, there will be roughly five minutes of silence before SCP-136-1 disappears and SCP-136-2 manifests.

SCP-136-2's appearance varies from manifestation, but is reported to appear corresponding to the gender and appearance of the doll (including being nude or partially nude), and will be human-like in appearance except for an excessively wide smile and bloodshot eyes with enlarged pupils. When it takes on a female appearance, it is noted to have an absurdly narrow waist and extremely large breasts. SCP-136-2 will begin slowly walking towards the subject (if more than one subject is present, each will see the form as moving towards him or herself), laughing, baring its teeth, and licking its lips while posing in provocative manners. When SCP-136-2 is approximately five centimeters from the subject, it will scream before disappearing. Ten to fifteen seconds later, SCP-136-1 will reappear in its previous location in a different configuration.

Those exposed to SCP-136-2 will become paranoid and unable to function out of fear, usually requiring assistance to simply leave the testing room. Subjects will be prone to night terrors for up to six months after their experience.

Even though originally thought to be isolated occurrences, an incident occurred when Dr. Simon volunteered for exposure, and approximately two hours later, reported seeing SCP-136-2 again outside of the testing room. After about two minutes of panicking, everyone in the room fell unconscious, and when they came to, Dr. Simon was in a coma, dying three days later.

SCP-136 is kept in a standard concrete containment room, with SCP-136-1 kept in a plastic case. 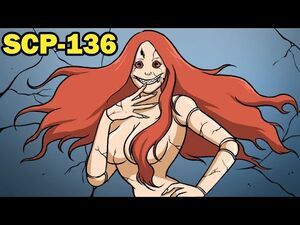 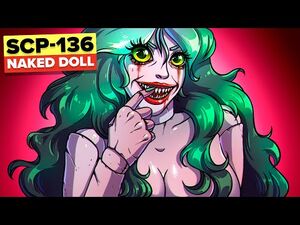