SCP-137, also referred to as The Real Toy, is a Euclid-class object under the SCP Foundation's containment. It is an enigmatic being that possesses toys and toy-like objects and manifests as real versions of the item in question.

SCP-137 was first brought to the Foundation's attention after a series of anomalous deaths of children. Foundation personnel found it in the form of a pony in a nearby wilderness and were able to tranquilize and capture it.

However, SCP-137 is unintelligent, as it lacks long-term memory and no capacity for learning or abstract thinking; its mind and personality is completely dependent on its form, which is in and of itself limited to the characteristics that a child might perceive.

Currently, SCP-137 inhabits a princess doll, transforming it into a real woman in royal garments waiting for her prince and talking about her castle.

SCP-137 is kept in a locked room with enough materials to entertain and satisfy its current form.persona. It is fed three meals a day. However, none of the toys or even toy-like objects are allowed within 500 meters of its containment.

Several tests were conducted to test the capabilities of SCP-137's abilities. 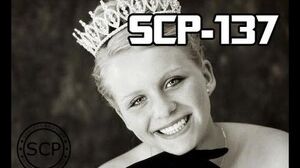