SCP-153 , also known as Drain Worms, is an Euclid-Class species from the SCP Mythos. They are species of Parasitic worms that prey on human flesh and lives in sewers and drain pipes.

SCP-153 specimens are Parasitic Predators that swim up to a house bathroom and showed up in a shower or a bathtub drain, They will then dissolve the drain cover with their acidic saliva and camouflage to become the drain it just dissolve which made it impossible for humans to see if it is an actual shower drain or not.

When a human the shower or the bathtub, it will patiently waits until the victim starts showering and when they does, It will release its acid from the mouth to liquefied the human body as it absorb the liquefied body and will return to the drain. leaving almost nothing behind of the original victim.

SCP-153 Specimens are to be kept isolated from each other to prevent any incidents under the controlled of breeding conditions.

SCP-153 may have adapted to its environment after Incidents in █████████████ that alerted the Foundation of its new hunting techniques such as attacking people through sink drains, toilets.

Dr. Kovalanskaya has suggested a breeding researching program for SCP-153 and including a potential method of organic waste disposal. Dr.Kovalanskaya suggestion has been approved by the Foundation.

A Proposal of controlled release of SCP-153 instances to stalling the spread of SCP-2717, This proposal is yet to be approved.

SCP-153 appears to be or similarly a species of nematode (also known as roundworm) that is estimated to reach up to ██ m in length and ██ cm in diameter.

They are contained isolated and inside an acid-resistant containers. 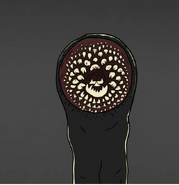