Villains Wiki
Register
Don't have an account?
Sign In
Advertisement
in: Mature, Partners in Crime, SCP Foundation Villains,
and 27 more

Working as a team.

Work together in killing as many victims that enter their chamber as they can.(ongoing,repeatedly succeeded)

SCP-1913-1, SCP-1913-2, and SCP-1913-3, known together as The Furies, are three separate entities in the SCP Foundation mythos. They were originally categorized as Keter until they were moved to Euclid. SCP-1913-3, also named Freddy, is also one of the two main antagonists (alongside The Maker) of the Pitch Haven canon.

In SCP-2476, it was revealed that Agatha was a demiurge inhabiting Eden, who took the form of a white cat. There, she, along with her brother, Fredrick, were well respected crafters, and known as the King and Queen of Eden. However, after humans sinned, and the Maker decreed that the inhabitants of Eden would have to eat in order to survive, she and Fredrick created a rebel group known as the Furies of Eden, whose goal was to kill the Maker. Sari and Siuward tried to dissuade her but she refused, and launched an attack. Later, she was caught, and punished by Sari and Suwaird by being coated in white clay, having her eyes removed, and then bled.

Sometime later, she ended up reincarnating as a human, but still retained her immortality. It was revealed that she had repented and learned from her mistakes, as during the 1892, she became the Administrator of a group of interest called Prometheus Labs, that specializes in anomalous technology, and was usually known as "Dr. Agatha White" or "Administrator Agatha White." As an Administrator, she had the highest position of power in Prometheus Labs. Under her leadership, Prometheus Labs managed to create many useful anomalous products and even cooperated with the SCP Foundation. Sometime during her career, she came across the ghost of Sarah Crowley (Sari), and she created a doll that her former fellow crafter could possess. However, she decided to leave Sari in the care of Dr. Alva, another former inhabitant of Eden working at Prometheus Labs, who Sari had also punished because she couldn't bear look at Sari in the pitiful state she was in. Unbeknownst to her, Alva had been torturing Sari under her care for 38 years. However, Agatha eventually found out about it, and punished Alva by reinflicting the same punishments she had suffered in Eden. Prometheus Labs collapsed in 1998 due to financial reasons, and Agatha tried to make the losses as small as possible. However, collapse was inevitable, so she handed most of the projects to the SCP foundation, including the doll possessed by Sari (now known as SCP-2792). Many of her former employees are now employees of the Foundation.

SCP-1913-1, also known by its name "Agatha", appears to be a white statue of a cat. It is decorated with white paint on its forehead, nose, and ears, with a black substance around its eyes, mouth, and paws. Agatha has the persuasive power of communication, speaking with a young female voice. Agatha is disdainful and contemptuous to the Foundation personnel; though it is cooperative when it comes to sharing its container with the two other SCPs. Agatha is known for giving information on the two inmates, as well for its false and slanderous statements regarding its containment.

It is known in SCP-2792 that Administrator Agatha White was fully aware of her past life, of her other body as SCP-1913, and what she did in Eden. She is so far the only member of the Furies of Eden that tried to amend her past, as her conversation with Dr. Alva showed. She also still cares about Sari and Siuward despite the punishments they inflicted on her back in Eden, and took the time to revive them through dolls she made, all of which prove that she's truly reformed.

SCP-1913-2 also named 'Telly' by SCP-1913-3, is a humanoid skeleton covered in dark hair and ash that gives it the appearance of a female creature. SCP-1913-2's skeleton resembles a human structure except for its skull and digits, which resemble those of a large canine. SCP-1913-2 always follows orders from the other inmates. SCP-1913-3 taught SCP-1913-2 to attack anyone that is wearing any armor or a coat unless the subject has any food for them. In that case, SCP-1913-2 appears to be very docile and cooperative.

If SCP-1913-2 becomes provoked, it will instantly attack its victims with clawing attacks. The victim sustains rapid damage and blood loss from the attack, but SCP-1913-2 never will kill its victims. The victims will still show signs of life until SCP-1913-1's ink begins making its own effects on the victim. If an organ is separated from a victim, the organ will continue to stay alive without the victim's control of it. SCP-1913-2 will continue attacking the victim until the victims stop moving away from it.

Although SCP-1913-2 doesn't need any substance for its survival, it feeds itself with the victim's meat, and will quickly become agitated if the meat is not provided.

SCP-1913-3 also known as 'Freddie', appears to be a black, male, Labrador retriever, missing its mouth, nose, and eyes. SCP-1919-3's face has numerous holes on its face, each revealing a white light. SCP-1913-3 does not want to harm either of its inmates, but also does not want to communicate with SCP-1919-1, because of "family matters".

Once SCP-1913-3 finds its victim, it will instantly release gray flames through the holes in its face. The flames that the SCP-1913-3 produces are immensely hot, and they have a powerful burning effect when they come in contact with objects.

The fire will burn victims' skin until they are completely consumed, or until the fire has been put out. The victims will suffer several burns from SCP-1913-3's attack, usually rendering the victim blind, deaf, and having lost his or her sense of touch. Termination of a victim is only successful if SCP-1913-3 and SCP-1913-1 combine together, where they completely destroy the victim with their combined fire and ink. 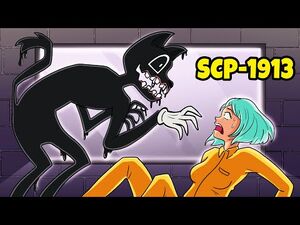 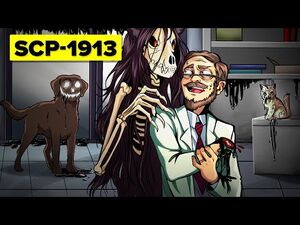