Spread its influence throughout the world.

Escape from the SCP Foundation (succeeded).

SCP-2075 is a Keter-level SCP within the universe of the SCP Foundation. It is the collective term for a microbiological pathogen and its possessed hosts (SCP-2075-A). SCP-2075 as an entity is a practitioner of Sarkicism, and was formerly a Russian Sarkite named Aleksi Kravchuk, also known as Karcist Varis. At one time it was partially contained by the SCP Foundation when they captured Kravchuk, but he was later freed by other instances of SCP-2075-A.

Varis was born in 1204 AD. Although initially normal, he was apparently visited by Grand Karcist Ion, who granted him the power to control others via a microbiological pathogen in his breath. However, he was not simply granted control; any possessed by Varis were assimilated into his hive mind.

While proselytizing about Sarkicism in Russia, Varis was met with resistance from the church. At one point, one of his "limbs" was lynched in Novgorod after being accused of being a Gnostic witch. Varis himself was imprisoned by the Romanov dynasty, and remained in prison after the Russian Revolution, watched over by GRU Division "P". While in Soviet custody, he was experimented on under the orders of Joseph Stalin.

After the collapse of the Soviet Union, GRU Division "P" was crippled and forced to hand Varis over to the SCP Foundation, who designated him SCP-2075 and imprisoned him in Sector-G of Site-66 under the belief that he was only one being. In order to avoid possession he was imprisoned in a sterile isolation unit at all times, with communication occurring through a microphone during regular interrogations by Dr. Albert Cronenberg. Through these interrogations much of the information about SCP-2075 was discovered.

However, two security officers at Site-66, Jonathan Li and Jacob D. Moore, had previously been assimilated into SCP-2075. After deciding he had seen enough of the site, Varis requested to speak with Dr. Cronenberg. He informed him that he was leaving, and had always had the power to do so. Officers Li and Moore then stabbed Cronenberg to death before releasing Varis, who in turn released a gigantic mass of amorphous flesh which destroyed the entirety of Sector-G. Li and Moore were killed by the destruction, whereas Varis presumably escaped and remains at large.

When the event only known as SCP-6500 began neutralizing all of the anomalies due to the Foundation containing most of them, in the "Emissary's Path" the Foundation rechristen itself Vanguard and deliberately caused a "Broken Masquerade" scenario in order to stop SCP-6500. During the creation of Vanguard the former Foundation leaders decided to recruit personnel from other groups of interest, which included a reformed SCP-2075 representing the religion of Nälkä. In his first mission as part of Vanguard's goal to raise awareness of the anomalous and protect humanity without secret, Varis was sent alongside Dr. Clef to lead some MTF personnel into raiding The Hunter's Black Lodge. During the attack Orok finally awakened from his coma, but thankfully he understood what was going on and promised both Varis and Clef that he would force the Lodge to reform themselves in exchange that the two Vanguard agents don't get the Russian government involved.

With the last mission being a success, Varis and Clef were then sent to the town in Massachusetts where SCP-2480 had taken place. Varis' first action was interviewing the ex-site director turned traitor Simon Oswalt after he had met an impostor masquerading as Ion. After Varis was able to convince Oswalt that he was granted power by an impostor, Varis and Clef went to the barrier surrounding the town to form a plan of defend the people residing inside since they learned that a GOC squadron would be sent to cleanse the town of the Sarkic influence. At that point Varis met with the people of the town who were left in poverty after being secluded from the outside world due to them being Sarkics, which caused him to find a way to stop the GOC from attacking. He decided to hold a press conference where he told the reporters about the GOC's motives and actions and introduced them the people from the town, showing the benevolent side of the Nälkä religion. This caused the GOC forces sent to the town to abandon their assault and retreat, sparing the town in the process and allowing Vanguard to normalize it. 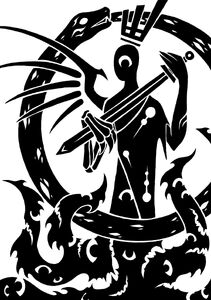 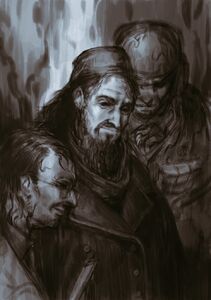 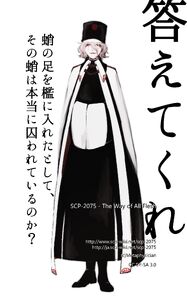