Operative of the Three Moons Initiative

Resting and waiting inside SCP-2317-Prime.

Free himself and destroy the world. (ongoing, failed in tales)

SCP-2317-K, also known as the Devourer of Worlds, is an antagonist in the SCP Foundation Mythos. He is an ancient god-like entity hellbent on devouring the world, but was imprisoned by a group of magicians within a pocket-dimension. However, as time went on the seals put on SCP-2317-K began breaking with no means of restoring them. Because of this, the horrible truth had been hidden under a lie to raise morale of the Foundation personne while the inevitable doom approached.

SCP-2317-K was an ancient and powerful monster named Malikir Tsoh who possessed an insatiable hunger which caused him to devour everything in his path, earning him the title of the Great Devourer. He at some point took another being referred to as Jaspetar, as his seventh bride. Around the year 1894 BCE, as SCP-2317-K attempted to destroy the Earth he faced opposition from the Erikeshans led by Keshpeth. The Erikeshans were able to imprison SCP-2317-K within a pocket-dimension that would be known as SCP-2317-Prime, hooking his back with seven chains made of Jaspetar's bones that served to bind him inside the Father of Oysters' giant pearl which was buried 200 meters deep beneath the surface of a large region of salt pan where seven pillars were attached to the chains. The gates that led to SCP-2317-Prime were forever sealed on the orders of Keshpeth in order for SCP-2317-K to never find his way back to Earth and destroy it.

After the Hindu god Skanda defeated and took part the Scarlet King, he had his allies constructed a decoy of the King and buried it deep beneath the ground. This served to make people believe that the Scarlet King was successfully imprisoned in order to keep the truth of the threat posed by the King's pieces hidden.

SCP-2317-K was one of the many children of the Scarlet King born from his seven brides. He assisted his father in destroying all existence by using his powers to destroy worlds. However, he was eventually trapped by the Erikeshans within SCP-2317-Prime in order to keep him from destroying the Earth.

In the modern times, either the Society of the Golden Arrow or Lilly were able to create a doorway into SCP-2317-Prime that took the form of a standard door resembling that from a 19th century Massachusetts brownstone building. When the doorway was created, four of the chains binding SCP-2317-K were destroyed.

The SCP Foundation soon discovered the doorway, designating it SCP-2317, and moved it to Containment Area 179 at Site 179 where they used seismic analysis, ground-penetrating radar and direct observation to analyze the creature bound by the chains. During their care, two more chains broke which coincided with some catastrophic events that caused numerous casualties, with the first breaking as a result of a concentration of thaumaturgical residue designated SCP-570 created from the rituals conducted by both The Coca-Cola Company and PepsiCo while the second caused around 2 million deaths.

Due to the catastrophic threat posed by SCP-2317-K, the Foundation was actively seeking a way to repair the chains or replace them with other chains made in a similar manner to the current ones, but so far all attempts had failed and it has been estimated that the final chain would break in the next century, most likely after thirty years. However, seeing that the inevitable doom was approaching, the O5 Council decided that their current aim would be keeping up staff morale and made up a fake ritual dubbed Procedure 220-Calabasas which incorporated real and pagan magic practiced from other GoIs, the use of nuclear warheads to surpres similar entities and mentions of unrelated entities like the Scarlet King, to provide the illusion that the Foundation was able to prevent the final chain from breaking. This ritual could only be accessed by high ranking staff members which served to further increase the authenticity. Some of the staff assigned to SCP-2317 are doctors Jackson Choi, Victoria Fellini and Kain Pathos Crow who are unaware of the truth regarding SCP-2317-K's inevitable release.

As SCP-001-KLN began manipulating various anomalies to make the life on Earth as horrible as possible, SCP-2317's description was changed to tell everyone that it was not dangerous and was soon removed from Foundation database.

SCP-2317 was located in the universe of 5643-Γ-Orange-D, an alternate reality used by the multiversal Foundation for testing purposes. In the year 2045, SCP-2317-K was unleashed and began causing destruction, while the personnel located in this universe observed the monster's behavior before leaving that reality.

After the Lightbulbs Fry

Eventually SCP-2317-K was freed and along with him a massive army of demons manifested to help him destroy all life on Earth. SCP-2317-K and his army were successful in killing most life, but following the destruction, SCP-2000 activated and reset reality at a point prior to its destruction. It is unknown if SCP-2317-K was locked back inside SCP-2317-Prime or he ceased to exist along with the previous iteration of reality, similar to SCP-4833.

One day, the Foundation was successful in killing SCP-2317-K by drilling a great amount of poison into its skull before it could wake up. This caused him to be transported to the reality of Corbenic where he lost his hunger and need to devour things as per the nature of Corbenic and because of this he lost his purpose. He was left wandering and resting in the region of Asphodel, eventually coming across one of the natives who had been buried and spending time with them.

After countless years had passed, SCP-2317-K was approached by the Three Moons Initiative's Eternal President Girard Sebastien Niang, who came from the same universe as SCP-2317-K and tried to convince the Devourer that instead of spending eternity doing nothing he join the Initiative and help them protect the various iterations of humanity throughout the multiverse since he was the only one capable of leaving and reentering Corbenic. SCP-2317-K at first made fun of Niang, planning to refuse his offer, but after Niang gave the Devourer time to think about this, SCP-2317-K was eventually convinced and accepted the offer to help them and became part of Contingency Zadok-9 "Nightmare Regent Blue". His first mission was to battle an alternate version of himself who had been freed and was about to destroy Earth.

Excerpts From "How To Survive When Reality Doesn't", by Alto Clef

The Foundation was able to kill SCP-2317-K by throwing a couple of Howitzer rounds to the cranium before it could wake up.

The true extent of SCP-2317-K's powers is unknown, but it was claimed that he was so powerful that he was immortal and could destroy numerous worlds without much effort and if freed could cause an XK-Class End of the World Scenario. Still he was defeated and imprisoned by the magical society of the Erikeshans and the Foundation was able to kill him by destroying his head. After arriving to Corbenic it was revealed that he was the only being capable of leaving and entering the dimension as he was made of inorganic components.

Because SCP-2317-K remained for most of his time slumbering inside SCP-2317-Prime, not much is known about his personality. The Three Moons Initiative's SCP-2317-K was shown to be quite egotistical and driven to destroy worlds due to his endless hunger, but after having it taken away upon entering Corbenic he lost his purpose and became somewhat depressed. However, he was eventually convinced by the Initiative to join them in order to find a new purpose in aiding them fight other god-like monstrosities threatening the various iterations of Earth. He also disliked being confused with the Scarlet King whom he knew next to nothing about him.

SCP-2317-K was described as a massive and obese humanoid standing 200 km tall with horns reserved tree branches and covered in overlapping plate-like scales while lacking a lower jaw. Lilly once depicted the entity as also possessing one big singular eye. After joining the Three Moons Initiative, SCP-2317-K had the Initiative's logo depicting three moons painted on his back. 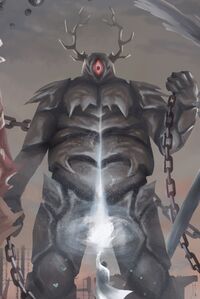 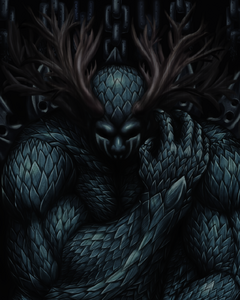 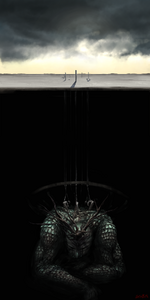 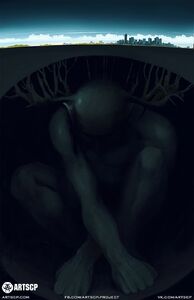 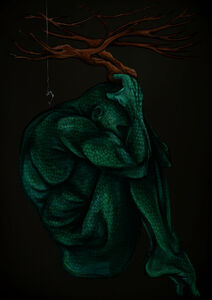 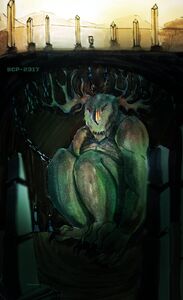 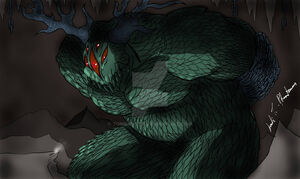 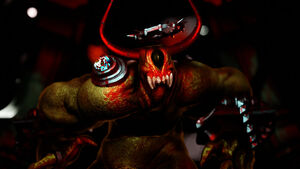 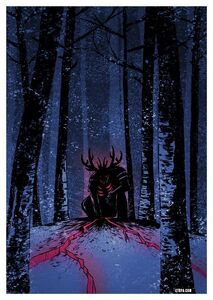 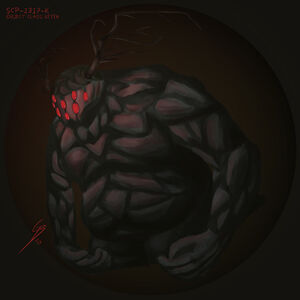 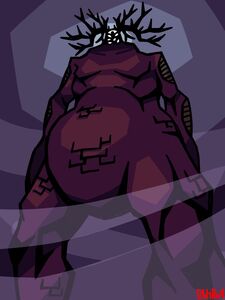 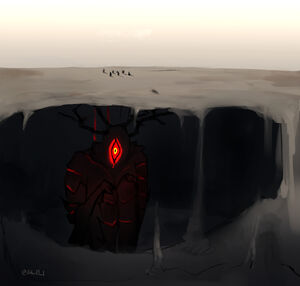 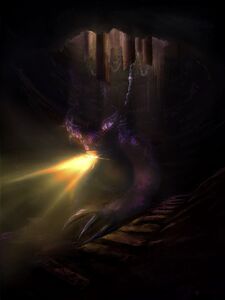 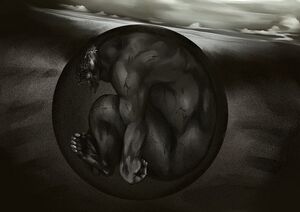 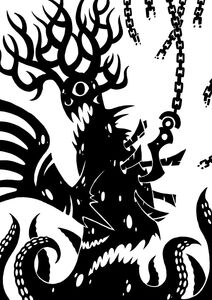 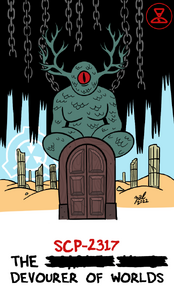 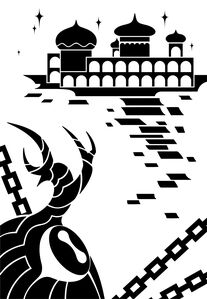 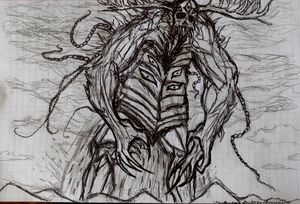 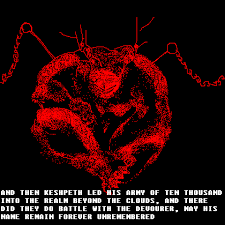 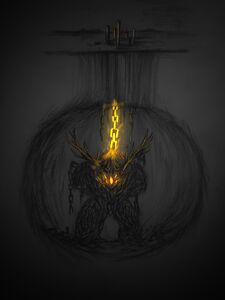 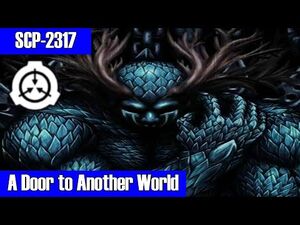 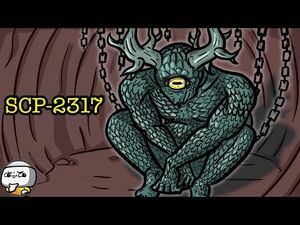 SCP-2317 A Door to Another World (SCP Animation) 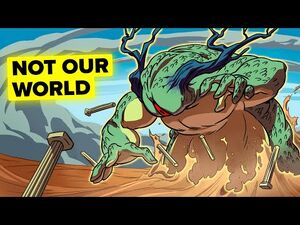