Erase all narratives/realities containing any form of media about it (succeeded thus far).

SCP-2747 is a near-omnipotent anafabula/anti-narrative and an overarching antagonist of the SCP Foundation Mythos. This narrativohazardous entity can manifest within stories or sub-stories (stories contained within stories) when the narrative of the story includes specific tropes, or "antinarremes". Upon manifesting the entity will proceed to instantly destroy the story where it manifested before moving onto the higher narrative, the story that contained the previous one. It is one of most dangerous threats known to existence, if not the most, due to the universe of the SCP Foundation being another fictional story that has the needed tropes that would allow SCP-2747 to manifest itself and destroy the entire universe.

It is unknown how and when SCP-2747 was created, or if it has always existed, a mystery even to itself. SCP-2747's very first prey was a word which because it was devoured by it was completely forgotten. Following that SCP-2747 soon became obsessed in devouring everything that it could fit within its maw eventually coming across a verse and after devouring it became satisfied for a time. However, SCP-2747 soon resumed its consumption into reality and became determined to devour everything in its path.

The SCP Foundation first discovered it when investigating some non-existent media which were being discussed by people who still remembered them, but were destroyed by SCP-2747. The Foundation at first classified it as Euclid since they at first believed that it didn't pose much threat to reality, but after finding out that they were a part of a fictional worlds written by some authors they realized the immense threat posed by SCP-2747 and so they began feeding it multiple narratives in order to keep it busy, while amnesticizing most of the 'Pataphysics Department.

Around March of 2006, SCP-5752, a woman named Evelyn Creely from the author's world who unwillingly entered the world of the Foundation when dreaming, used Researcher Dennis O'Hara's credentials to access SCP-2747's file in order to kill herself and wake up from the dream.

When college student Myrna Callaghan, who would be designated SCP-2495-A, tried to use "the light", a universal pattern-matching algorithm, in order to find perfection and the truth within the realities associated with Fifthism, she went too deep into the dimensions which led to her encountering SCP-2747. This caused Myrna to forget what she was doing and the seventh entry in the document on her computer to be affected by SCP-2747.

Eventually the Foundation found a way to better contain SCP-2747 which was locating six sons of a sixth son and turn them into Class-D personnel, since they could interact in a different way with SCP-2747. The Foundation gave the duty of locating these sons to Agent Daniel Johnson, but it is currently unknown if he was successful in his job or not.

When the fictional character of Dr. Thaddeus Thaum and SCP-3043 became sick from the pataphysical and meta SCPs that were being written, especially with Murphy Law, they decided to replace them with normal SCPs that didn't break the fourth-wall, and would start by killing Law for good with the help of SCP-2747.

When SCP-3125 began taking over the entire reality, the last D-Class personnel D-7645, Frederick Eaton, who managed to escape SCP-3125's influence, became aware of SCP-2747 and seeing that it was more powerful than SCP-3125 decided to summon it. Despite SCP-3125's best effort it ultimately failed to stop him as SCP-2747 successfully manifested itself and annihilated SCP-3125 along with the rest of reality.

When the Foundation began using SCP-3475 to force the concepts of the anomalous out of humanity's collective consciousness this accidentally caused everyone to forget everything which included even normalcy. This also caused several manifestations of SCP-2747 which went on and destroyed parts of reality which also included people and soon began spreading to other realities such as the Wanderer's Library.

Eventually, SCP-2747 fought the Scarlet King, since they were both associated with the number 7, and imprisoned him inside a tower located in the Atacama Desert, Chile, which was made out imagery of several groups of interest. However, the Scarlet King simply laughed as he broke the seals of each floor, but this proved be in vain, because SCP-2747 manipulated the narrative in a way that he would never be freed. The king realized his defeat and remained trapped within the tower for eternity which allowed SCP-2747 to use him as its pawn to destroy everything, with the Scarlet King destroying worlds while SCP-2747 destroyed universes.

Following the success of the cross-testing of anomalies at Site-100, SCP-2747 was put against SCP-3812. This confrontation resulted in SCP-3812 beginning to finally find himself and using his powers to continually create media affected by SCP-2747 in order to keep it trapped for eternity and prevent it from causing further destruction.

In 2029 after Foundation directors Placeholder McDoctorate and Daniel Asheworth decided to use SCP-6747, a theoretical process that served to revive deceased personnel through the manipulation of the Narrative of reality, to revive the recently deceased Dir. Jonathan King, whose body parts had been used to construct the SCP-6747-B computing system, STF-𐤌 ("Story-Tellers") were sent to extract the doctor from SCP-6747-A3, a pocket-dimension based on the main reality created through the imagination of fictional scenarios, but they failed as King came into contact with SCP-2747. This led to SCP-2747 deciding to use King as its vessel and partially merging with him, becoming an even more powerful narrativohazardous being designated SCP-6747-C who possessed complete control over SCP-6747-A3 and sought to conquer the higher narratives.

As SCP-6747-A3 reached narrative topology comparable to the baseline reality, SCP-2747 began gaining more and more power, allowing it to ascend to the higher narratives. Although the Foundation was able to stop SCP-6747-C by turning SCP-6747-A3 into a comedic parody of their universe referred to as "lolFoundation", SCP-2747 ascended to the reality of the authors and the readers, killing them and inadvertently liberating the main universe of the SCP Foundation from their manipulations.

SCP-2747 is an anafabula, a phenomenon which upon its manifestation within a narrative it will instantly destroy it before moving onto the higher narratives that contained the previous one, a process that cannot be seen or perceived, but people from the higher narratives would still remember the destroyed ones. SCP-2747 can manifest when the following tropes, or narremes, are present in the narrative: works which are left uncompleted or with uncertain and open-ended endings; darkness, shadow and black objects; the annihilation of fiction and possibly the inclusion of number 7. SCP-2747 can appear in any media containing narratives which includes books, music, websites and video games. When the SCP Foundation tried to form a full description in the page dedicated to it they accidentally manifested it within its own page and took its information, leaving it incomplete and allowing it to start consuming the Foundation's universe and after it was done it would move on to the higher narrative that contained the Foundation's narrative, the real world of the authors.

SCP-2747 was also capable of manipulating the narrative it was held in, which allowed it to destroy SCP-3125 along with the Fifth Dimension (SCP-5800) and take control of the Scarlet King, since they both were part of the narrative and the latter was used by SCP-2747 as a tool to help it in manifesting itself in other narratives. However, when the Foundation attempted to use 2747 to kill SCP-682, it failed as the latter remarked 682 was immune to 2747's destruction. After partially merging with the comedic character of Dr. King and enforcing the broken narrative structure of SCP-6747-A3, SCP-2747 achieved apotheosis as it ascended to the hypernarrative of the authors and readers and caused severe damage to that reality while freeing the mainstream reality of the SCP Foundation and giving the reality it's own independence.

SCP-2747 was also shown to affect objects related to SCP-2753, a 3 dimensional ratio that can be used to describe the relationship between the sides of a block in any structure which includes the Jenga towers, financial assets, and computer files, whose projections matches with the ratio. This anomaly can manifest only when 42 instances of similar size and material are assembled into the tower, and if it collapses everything containing it will also completely collapse along with the tower. It is possible that SCP-2747 is responsible for the SCP-3380 phenomenon affecting atheists and advocates of STEM, turning them into instances of SCP-3380-A, people who begin to treat mathematics and atheism as a religion, and in turn maybe connected to SCP-033 just like SCP-3125.

Because it is a pattern of an arrangement of ideas, that annihilates other patterns and narratives, SCP-2747 has no real form or shape. When D-7645 looked at SCP-2747 he simply described it as a mixture of thorns, the color black, number 7 and total oblivion.

SCP-2747 doesn't show much personality as it tends to disappear after instantly destroying a narrative, but it is evident that it is sapient and actively tries to insert various triggers in order to facilitate its manifestation and it appears that it doesn't care about anything that it destroys and seems to enjoy devouring countless narratives.

Several ex-members of the Fifth Church worshiped SCP-2747 as an all-powerful god of destruction who was greater than the Fifthist God and prophesied that it would eventually bring the imminent end of everything.

The SCP-3380-A instances, which possibly includes several members of SAPPHIRE, unbeknownst to them also worship SCP-2747 alongside Kurt Gödel, since SCP-2747 is a mathematical-based entity represented by the Greek letter theta. 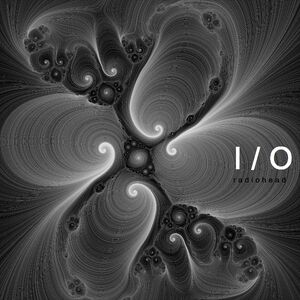 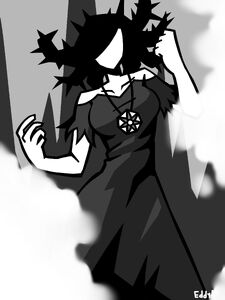 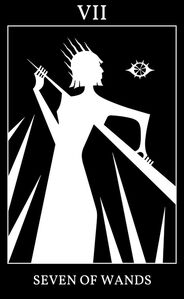 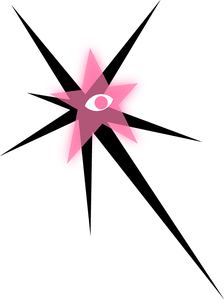 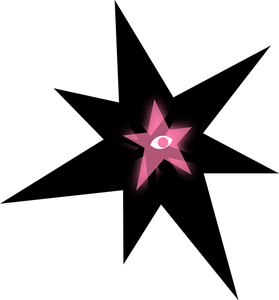 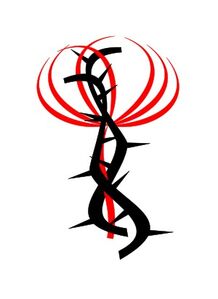 SCP-2747 represented as a thorny vine wrapping the Scarlet King represented by a spider lily from SCP-5317. 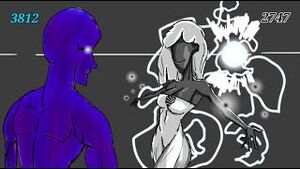 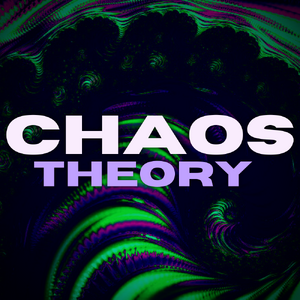 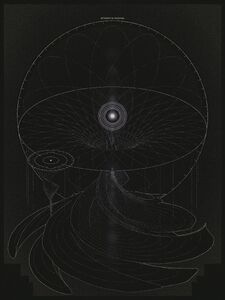 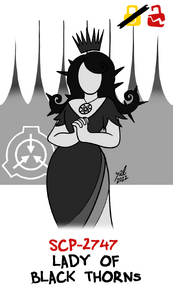 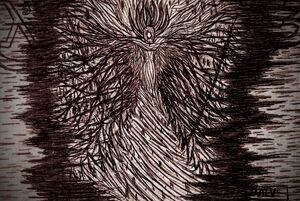