Breaking down the human mind.

SCP-3000, sometimes referred to as Anantashesha, or simply The Eel, is a sea monster in the SCP Mythos, which is implied to be one of the Old Gods, and the brother of the Serpent from the Wanderer's Library. Its object class is Thaumiel due to being a valuable asset to the Foundation.

It was originally an entry for the SCP-3000 contest which won 1st place, earning the post of SCP-3000. It plays a central role in the "Atzak" series.

SCP-3000 originally was in actuality a normal, albeit extremely long eel unrelated to the Hindu god Anantashesha. However, when people first discovered it they believed that the creature was the deity, and so similar to the Scarlet King, the eel became Anantashesha through the power of human belief.

Originally, before the creation of the universe there were two opposite forces that helped shape creation. One force was the existence of "IS", creation and reality that existed, while the other was the reality of "IS NOT", non-existence. The two forces combined their powers to create all of reality allowing Mekhane and Yaldabaoth to seed the newly created universe with life. The remnants of the two forces would then manifest in the form of two brothers, the Serpent and the Eel, which became revered as holy figures by the people of the city of Audapaupadopolis.

SCP-3000 was at some point imprisoned inside SCP-6222, a mysterious facility named "FISH PRISON" which acted as a modified prison for all sea life that committed any type of crime. SCP-3000 was arrested with the crime of "Apotheosis", becoming an instance of SCP-6222-1 before later escaping or being freed from its cell.

SCP-3000 was discovered by the SCP Foundation in 1971 off the coast of India after the mysterious disappearance of two Bangladeshi fishing boats and fifteen crew members. They quickly sealed off the area and put the Aztak Protocol into place.

Three divers, Alpha, Bravo, and Foxtrot, were tasked with making contact with SCP-3000. The mental effects of contact with SCP-3000 began to take effect when the divers began to refer to each other by the incorrect name, with Alpha attempting to talk to a deceased member of Foundation staff. Bravo became unable to see, and soon became temporarily unresponsive. Foxtrot suffered a headache before beginning to ramble and stating that "only the eel remains". The three divers began to become delusional and all but Bravo were eaten by SCP-3000. Bravo requested to stay behind and remained alive for three days before being presumably killed by SCP-3000.

The Foundation discovered the eel released a gas while eating, and that this gas had powerful amnestic effects. They called it Y-909 and chose too use it in their experiences. Thus, the area in which SCP-3000 resides is sealed off and regularly patrolled by Foundation personnel. No civilians are permitted to enter the area, and personnel must seek permission before having contact with this SCP. The Foundation submarine SCPF Eremita is tasked with carrying out the Aztak Protocol to extract Y-909 from the creature. Aztak consists of the Eremita feeding D-Class personnel to SCP-3000, causing SCP-3000 to excrete Y-909. Divers will then be dispatched to collect the substance during 3000's digestive process.

At some point, a Chaos Insurgency agent named Sam Biel while on a mission, encountered SCP-3000, leading to the monster removing all of his memories he had about himself. SCP-3000 decided to grant Biel some wishes and in response he wished to remember who he was, but as soon as he regained his memories back SCP-3000 inadvertently wiped his memories again until all wishes were used. This left SCP-3000 to return Biel to the surface where he was eventually picked up by the Foundation. After the O5 Council gave Biel several new identities for him to use, he became O5-11, also known as "The Liar", the head of the Department of Misinformation whose job was to keep the Foundation's existence a secret through ways which included utilizing Y-909.

Dr. Venkat Krishnamoorthy of the Foundation, after an encounter with SCP-3000 permanently affected his cognition, became convinced that the creature was the Hindu deity Anantashesha. Anantashesha is said to be the king of serpents, and will live past the end of time. Supposedly, when all is ended Anantashesha will still linger on. Dr. Krishnamoorthy was so horrified by this prospect that he committed suicide by feeding himself to SCP-3000.

Shortly after Dr. Krishnamoorthy's death, his colleague Dr. Mannava realised that his memories were being affected by his contact with SCP-3000. He began to remember things that never happened to him, and discovered that he was remembering things from Dr. Krishnamoorthy's past. This led him to finally discover the truth about SCP-3000:

SCP-3000 is a massive, aquatic, serpentine entity that strongly resembles a giant moray eel (Gymnothorax javanicus). The full size of SCP-3000 is impossible to determine, but is estimated to be roughly between 600 and 900 kilometers in length. Its head measures roughly 2.5m in diameter and sections of the body proper are as large as 10m in diameter.

When interacting with Calvin Lucien and Adam Ivanov, SCP-3000 took the appearance similar to its brother in a humanoid shape, but other than that is unknown as it hurt looking at it.

SCP-3000 is typically a sedentary creature, only moving its head during feeding or in response to stimuli, while the body rarely moves at all. Despite this, it moves extremely quickly to kill its prey. SCP-3000 appears to have psychic abilities, as demonstrated when a Foundation agent named Williams was exposed to it and began smashing his head against the submarine window before dying while whispering "There's nothing". As it eats its prey, it excretes a black substance known as Y-909 that the Foundation uses to make amnestics.

SCP-3000 appears in the eight minute animated movie SCP-3000 The Unending Serpent created by ForlornFoundry as the titular central antagonist. The movie is about the exploration and discovery of SCP-3000. 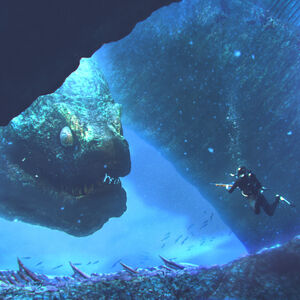 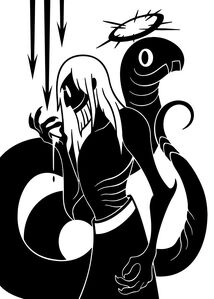 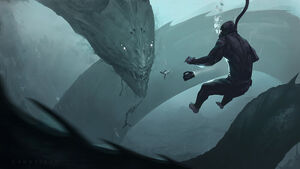 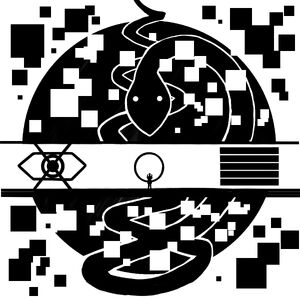 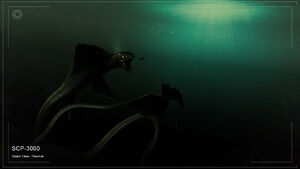 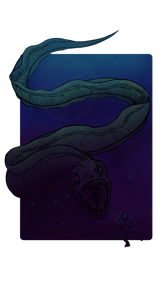 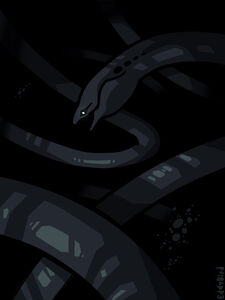 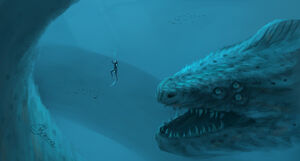 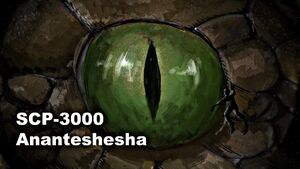 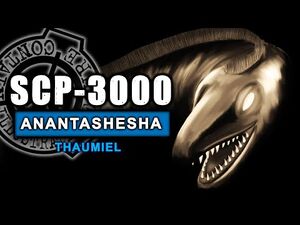 SCP-3000 illustrated (Shesha - what remains at the end) 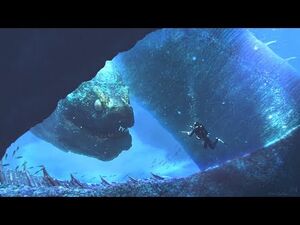 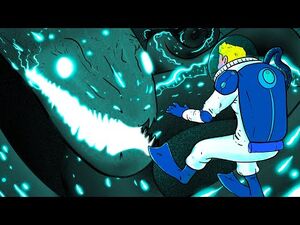 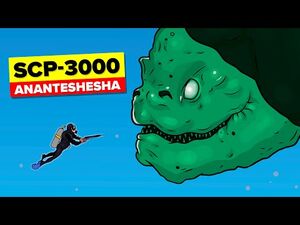 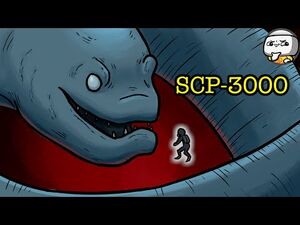