Force-feeding lasagna to its enemies.

Punish those who oppose the success of the Garfield franchise.

Eldritch Mascot
SCP-3166 is a Euclid-class SCP that is uncontained, but documented by the SCP Foundation.

The SCP manifests only when the Garfield franchise is doing poorly, and takes the appearance of a disturbing and monstrous version of the Garfield character.

To keep this SCP away, the SCP Foundation assists the franchise with funding whenever it can, even to the point of using memetic agents in the comics.

The first documented manifestation of SCP-3166 was on October 23, 1989. This date was when a depressing version of a Garfield comic was released, although in the universe of the SCP mythos, all of those involved in making the comics had no memory of making that particular comic.

The SCP wandered around the offices of United Media in Chicago, seemingly confused. The creature then attacked anyone it came across after security attempted to subdue the creature. Twenty minutes after this, the SCP demanifested. The Foundation gave amnestics to all those involved to cover up the incident.

The SCP only appears when the Garfield franchise is doing poorly, or if a rival company or former employee does damage to the franchise in any way. Even those who parody Garfield may not be safe from the entity. SCP-3166 will manifest itself in specific locations and will seek out the following targets:

When SCP-3166 reaches its target, it will inflict bodily harm on them in any way it can, with the two most common methods being the use of any nearby objects to beat the target, and the second being the force-feeding of lasagna, which the SCP obtains from its own insides. Much like the actual character the SCP represents, SCP-3166 loves lasagna, meaning that the use of lasagna makes for effective bait in luring the creature away from its target.

Genetic testing shows that the meat inside SCP-3166 matches the genetics of Garfield creator, Jim Davis, who reported having "severe mosquito bites" on the days that SCP-3166 manifested.

SCP-3166 doesn't seem to share the personality traits of the very character it's based on. Unlike the original Garfield, who is witty, snarky, selfish, lazy and comical, the SCP is purely uncommunicative and violent. The only trait the original character and the SCP share is the love of lasagna.

SCP-3166 doesn't seem to speak or attempt to communicate with others in any way. The entity seems to have the same intelligence of a cat, making hissing and purring sounds during the time it manifests and attacks others. The only direct look at the SCP's nature is the violent tendencies it has when the Garfield franchise is not doing well, showing its anger and obsession over the franchise. 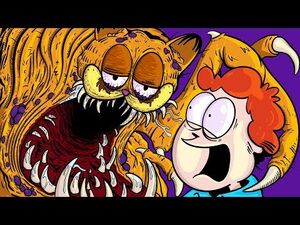 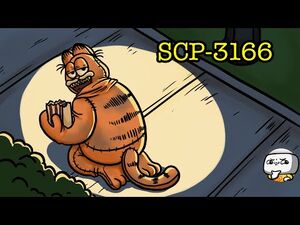 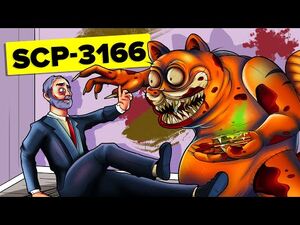