Make as many eggs as possible.

SCP-3199, known by the name Humans, Refuted, are formerly categorized as Euclid, now Keter SCPs contained in the SCP Foundation.

SCP-3199 was originally discovered in Ireland, after various reports came in claiming that there was a humanoid, bald, creature crying. Two personnel were sent to investigate the creature, resulting in both of them getting brutally killed by the creature. SCP-3199 ended up getting transported to the SCP-Foundation, in which more six-personnel ended up being killed by SCP-3199. It's unknown what is the SCP-3199's biological origin. Various personnel wanted to terminate the SCP-3199 from its existence, but it's currently impossible to do so. Because most of the SCPs consist of having at least one egg inside of their stomachs, they could continuously spread and totally avoid extinction.

As part of its mission to neutralize every single anomaly, SCP-001-EX ordered Foundation personnel to flood the underground chambers of SCP-3199 in order to make them "good boys". When a SCP-3199 instance breached containment as a result of 001-EX's manipulation, the Foundation executed its protocol and completely flooded 3199's chamber, leading to it entering an inert state.

Following the success of the cross-testing of anomalies at Site-100, SCP-3199 was pitted against SCP-4715, an immortal monster that grew in size when perceiving danger and when not perceiving threats it decreased its size, while generating heat in the process. During their encounter, 3199 tried to attack 4715, but 4715 grew in size and easily killed them all. However, as its size decreased, the heat emitted from its body causes the eggs of the remains of 3199 to hatch and the new adults attacked 4715 again, starting a never ending cycle.

As mentioned, SCP-3199 appears to be species of humanoids, though some tissues samples, SCP-3199 has traces of a chicken and chimpanzee. SCP-3199 is around 2.9 meters tall, completely hairless and weighs over 780 kilograms. The neck of SCP-3199 appears to be dislocated, allowing SCP-3199 to pivot their heads around up to 340°. Specimens of SCP-3199 are known to be incredibly fast, their maximum speed ranging up to 25 kilometers-per-hour. SCP-3199 are considered to be predators, as contact with a human or an animal almost always ends with SCP-3199 killing and devouring their victim.

People claim that SCP-3199 can produce giant-eggs of white color. The eggs are made in their stomachs, which get extracted from their mouths, with blood coming out with the eggs. SCP-3199 create the eggs to fill their space, in which they don't have a limit. 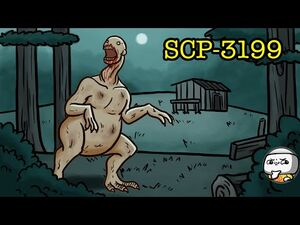 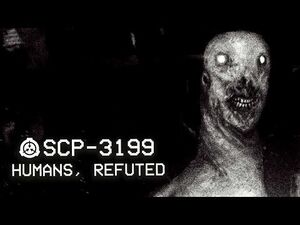 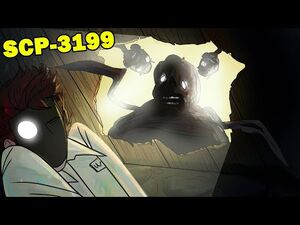