God
The Creator
The All-Mighty (possibly)

SCP-343 is a safe-class SCP under the SCP Foundation's observation. He is believed to be God, and currently resides at Site-17, where SCP-343 is contained voluntarily.

Despite SCP-343's seemingly benevolent nature, he has been shown to have a more malicious side, as he erased a Foundation doctor from existence after the doctor confronted the SCP who caused the doctor's orders to go missing. It is also implied that he may have brainwashed the entire Foundation into serving him.

SCP-343 was discovered by the Foundation in Prague, where a staff member witnessed Him teleport onto a rooftop. He was detained and brought to Site-17. While voluntarily contained in a 20×20 cell, He was interviewed by Site Director Beck, and claimed to be the creator of the universe. When asked to prove it, SCP-343 walked through the wall and returned seconds later with a hamburger.

Due to His apparently harmless nature, all personnel were allowed to speak with SCP-343 at any point. Those with clearance levels lower than Level 3 were initially not allowed to see Him, but the guards never bothered stopping them, replying to questioning with "You know He likes the company." The O-5 council later approved a request from Dr. Beck to rotate all Foundation staff through Site-17 to speak to SCP-343, as it approved staff morale.

However, one Foundation doctor was suspicious of SCP-343, suspecting that He intended to brainwash the Foundation for its own unknowable purposes. As such, He ordered for all personnel visiting SCP-343 to be interviewed about their reasons. His orders went missing, and the doctor announced his intention to confront SCP-343 to Dr. Beck. He disappeared afterwards and nobody at the Foundation remembered he existed, implying he was erased from existence by SCP-343.

In this fan-made, non-canon series, SCP-343 is interviewed by a Foundation member. Here, the SCP's physical appearance takes the form of many real-life interpretations of God: an old large man with a white robe, long hair and long facial hair.

SCP-343 is remarkably soft-spoken, friendly and calm in nature. Much like the original SCP mythos, SCP-343 retains His claims of creating the universe and all life within it. When questioned on the two SCP's meant to be Cain and Abel, SCP-343 answers that He "cannot expose the secrets so easily". When questioned about SCP-049, SCP-343 comments that he's a "dark spirit who lost his way" and that "a darkness follows him", even feeling sympathy for SCP-049's existence. When questioned about SCP-682, SCP-343 states that 682 was not created by Him, and therefore has no power over it.

At the end of the video, when asked about the mysterious SCP-001, SCP-343 quickly creates an orb of light around Himself and disappears.

In a separate video within the same series about SCP-035, both the interviewer and the SCP question the nature of SCP-343. SCP-035 questions why SCP-343 would need to hang around the Foundation when there's a whole universe out there. The interviewer adds that SCP-343 comes off like less of a god and more of a used car salesman, and that He may be "hiding from something".

Once again, an interview is conducted with SCP-343, this time, the interviewer is a man named Isaac Watchthorne (who always goes by "Watch"), and is accompanied by an SCP researcher known only as "Jacobs". Both the appearance and personality of the SCP has gone through many noticeable changes compared to the previous video. SCP-343 now speaks in a domineering and serious tone of voice, in contrast to the soft-spoken and calm demeanor he had in the previous video. SCP-343 now appears as a thin man in a white robe, long white hair with little facial hair, unlike his previous appearance, where he appeared as very muscular and had very long facial hair.

SCP-343 showcases his powers much more than in the previous video, ⁣ as SCP-343 changes the setting of the interview room to a much larger and beautiful stone-carved room adorned with statues and waterfalls; calming music is also played to add ambience to the new setting. The topic of false gods comes up in the interview, which causes SCP-343 to teleport SCP-035 nearby. Seconds before being teleported, SCP-035 was likely attempting to escape and/or kill researchers, as SCP-035 is heard saying, "Stay back, or four-eyes gets the sharp end!" before realizing where he is. SCP-343 then teleports him to an unknown location as a form of punishment, promising to return the mask once the punishment has ended.

As the interview goes on, Watch gets increasingly annoyed by the fact that SCP-343 is all powerful, but doesn't extend his power to help those who need help the most, including the fact that SCP-343 doesn't assist the Foundation with any dangerous SCP's. The last straw for Watch is when the topic of SCP-343 erasing a researcher from existence comes up. SCP-343 explains the reason for this is that said researcher was about to discover a truth he shouldn't have, then adding that humanity is better off not knowing some things.

The interview ends with Watch trying to attack SCP-343 by throwing a clipboard at him, which the latter halts in midair. Jacobs steps in and holds Watch back. SCP-343 then leaves, reverting the room back to its original form. 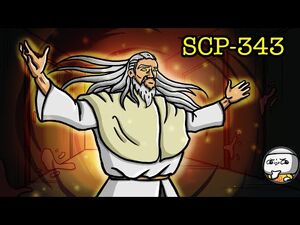 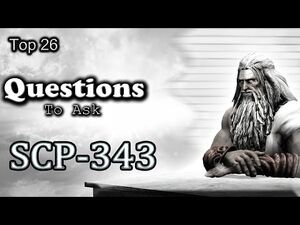 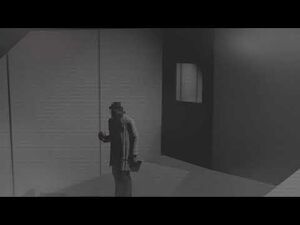 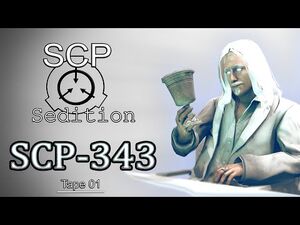