To devour as much as she can before her inevitable capture.

SCP-352, otherwise known as Baba Yaga, is a Keter class SCP of the SCP Foundation. SCP-352 was found in southern Russia, and, with any SCP special caution is to be taken when handling this creature.

SCP-352 is a humanoid creature that resembles an elderly woman. SCP-352 is an aggressive, dangerous and violent predator that uses hair-like strands to create webs which capture prey.

Each strand secretes an enzyme which immediately assaults the nervous system of her victim. Usually, the effects of the enzyme last for a few days; however, the effects could become permanent if her prey was exposed to a high concentration of the enzyme. Once she has her prey within her grasp, she rips their limbs off before fully consuming them, which can take several days. During this time, her victim would be fully alive, but unable to comprehend their surroundings.

Reports of an elderly woman luring people into an enchanted forest to murder them started to arise in a southern Russian town. However, the SCP Foundation initially ignored these reports, but as more reports started to pile up, they eventually went to investigate.

By the time that they had arrived in Russia, they discover that a small Russian town had been completely destroyed by the SCP. Bodies were scattered everywhere in the ground, and trails of blood led to the enchanted forest. The Foundation was able to capture Baba Yaga, but they had suffered major casualties.

SCP-352 speaks in an Old Russian accent, which could make translating what she says difficult. She usually doesn't converse with any of the members of the SCP Foundation, but when she does, her words come off as threats of revenge or bodily harm. In addition to this, her background is shrouded in mystery.

While SCP-352 kills and eats any human that she comes across, she prefers to feed on children between the ages of 0 to 2, as evidenced by her not attacking the staff when she was given that type of flesh. As such, the staff was considering a change in her diet. SCP-352 is known to grow hair-like strands from any part of her body. These strands can grow several meters in an hour, and they seem to be partially controlled by Baba Yaga.

The strands are nearly invisible to the naked eye, and they are known to crawl on their own. The strands produce an enzyme that is mostly concentrated in the saliva and hair of the creature, but they can be found throughout all of the tissues of the SCP. Upon coming in contact with human tissue, the enzyme instantaneously attacks the nervous system, causing symptoms such as hallucinations, the suppression of logical thinking and pain receptors, to manifest. 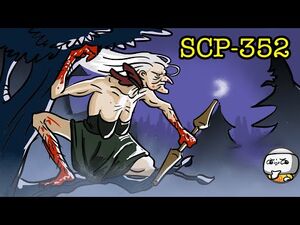