SCP-3999
The Center of Everything That Happens To Me
Vice President of the United States, Mike Pence
Max Landis
Nobody
Free Jazz
A Melon
A Bookshelf Filled With Stories
The Administrator of the SCP Foundation
Death
The Last Moment of the Sun
Your Nightmare
The Death of Everyone You Ever Loved
The Anomaly
The Primordial Ooze
Everything That Was Wrong With the World
Anti-Talloran
Theta Prime (according to a SCP-2305-A)

Representation of the author

Torture James Talloran for the rest of eternity (failed).

SCP-3999 is an antagonistic character in the SCP Foundation Mythos. SCP-3999 was the in-universe representation of author, LordStonefish, taking the form of an obscure, ancient monstrosity that had the ability to alter and twist the entire universe as it wished, using its powers to horribly torture for infinity Foundation Researcher James Talloran, its personal creation and arch-enemy.

It is the main antagonist of "…Like Clockwork" series.

SCP-3999 was the fictional representation of author LordStonefish. As the being was struggling with creating stories involving its character Researcher James Talloran, it became obsessed with writing for him to the point of going mad and manipulating the entire reality of the SCP Foundation. It allowed the Foundation to contain inside one of their facilities and waited for the organizers to assign Talloran to study it.

Upon meeting him, it began to reshape the world around it, all of its creations centered in causing Researcher Talloran to suffer horribly, this torment going on for what Talloran stated to be millions of years.

However, Talloran eventually manages to gain the upper hand, bringing order back to the world and facing his enemy head on. He proclaimed that he figured out why SCP-3999 chose him of all people to keep alive, it needed him, for without Talloran it could not exist.

The Researcher nexts stated he was fed up with 3999 and the pain it brings, "I am sick of your horror. I am sick of you." 3999 melted Talloran into goo before stating that it was immortal.

The perspective then switched to that of 3999, who explained with fourth wall awareness they were the author of the SCP page currently being read. They confessed their struggle with coming up with a enjoyable and interesting article, having had many ideas they gave up on, most of them involving Talloran.

They speak of how they had a nightmare, this nightmare of Talloran and every other SCP thus far made appearing before them, Talloran then proceeded to brutally murder them before they awoke.

SCP-3999 stated "SCP-3999 has won, SCP-3999 has lost. I love myself, I hate myself." The article then ended with a report that showed reality had been restored and 3999 was gone, all that remained of it being its empty containment cell and Talloran's body. His cellphone is shown to contain the entire SCP-3999 article just read, Talloran apparently having killed himself to destroy SCP-3999.

It was later revealed that SCP-3999 in fact wasn't destroyed by the death of Talloran, but only momentarily destabilized as like the authors hail from the Alpha layer and it now acted as a communicative interface between the Foundation and other authors via Operation Flat Horizon.

Because of Site-100's manipulation, SCP-3999 was cross-tested with SCP-1893, a story infection which turned anything that mentioned it into a fictional story including a new character who was aware of the person reading the story, but would maintain the original message in the form of dialogue. After being introduced to SCP-1893, SCP-3999 began using him as the central protagonist in its stories, while discarding Talloran and threatening SCP-1893 with a baseball bat.

SCP-3999 is vile and cold hearted entity, who for apparently no other reason besides it enjoys it deciding to destroy all of reality. It chose James Talloran to keep alive, spending what was said to be millions of years torturing him, its powers allowing it constantly murder and revive the man to suffer.

It seems to revel in its superiority over others, for it uses its powers to do whatever it pleases, almost all actions made to in some way cause Talloran misery. When Talloran manages to subdue the creature, if only for a moment, he vowed that he would find a way to destroy it. In response, SCP-3999 turns Talloran into a puddle of goo, proclaiming itself to be immortal.

However, it at the same time fears Talloran, shown when it suffers a nightmare in which it is made helpless and unable to defend itself from Talloran, whom it describes in the dream as a demonic horror so terrifying he makes 3999 soil its bed. When faced with what seemed to be its end, SCP-3999 accepts its fate, allowing Talloran to kill it, waking up to only proclaim it both loves and hates itself before ceasing to exist, its death undoing all the damage it caused.

Because Talloran (its own self-insert) killed himself which drove the entity away, it now joined the MTF squad of Operation ÓverMeta to help the Foundation take out other authors from the Alpha layer.

SCP-3999 is one of the most dangerous entity within the SCP Universe, with near god-like powers that allow it to warp and twist everything around it. Nigh unstoppable, nothing the Foundation threw at it fazed the entity, even materials and devices specifically designed to counteract reality warping SCP's having no effect.

It can manipulate matter at will, using this to create entire universe dedicated solely to bringing James Talloran pain, its powers also letting it kill and revive the man over and over again. Having lived for over three million years and still willing to continue torturing its victim for what seemed to be eternity, Talloran himself calls it "The Primordial Ooze".

As SCP-3999 is a member of the authors, it also possessed tremendous plot manipulation power, being able to destroy and reconstruct an entire multiverse out of pure spite. It is able to transcend through the levels of the narrative stack, and basically is used as a way to connect in-universe avatars with the authors. 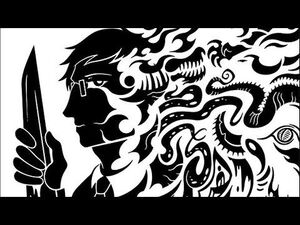 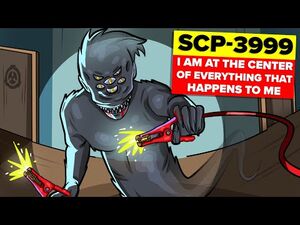