Worshiper of the Old Gods

SCP-4231-A is an antagonist in the SCP mythos. She was a reality bender who was the wife of Dr. Clef (Francis) and the mother of SCP-166 (Meri).

Lilly met Francis when he was just a child, with the two becoming friends as they grew up together. While they grew up, they would they recreate scenes from Poltergeist, change the channels on the radio with their minds, and bend pennies without touching them. Whether this was all genuine on her side or she was just using Clef even back then is unknown. By their teenage years, Lilly eventually discovered a translated copy of the Erikesh Codex, a book which possessed detailed history and rituals regarding the Scarlet King, previously belonging to Francis' mother. After reading it Lilly became a worshipper of the Scarlet King, causing her to become more abusive towards Francis, constantly berating him for not telling her his secret, making him think that he was lucky to have her, and at one point sexually assaulting him. Francis thought that something was changing her, and that she might eventually turn into something he would be paid to kill.

Lilly went on to use her reality bending powers to create a shrine of the Scarlet King underneath her house in Cornwall, before proceeding to kidnap six girls and locking them in the shrine. Using the rituals she learned from the Codex she began to horribly torture the poor girls as part of the ritual, turning the girls into effigies of the Scarlet King's brides. Lilly also used her powers to create a door which lead to a dimension where the Devourer of Worlds was locked. Unbeknownst to Francis, who had no idea about Lilly's work, he was also turned into the effigy of the King's first bride due to his own torture at the hands of Lilly. The result of their union eventually birthed SCP-166, whose birth caused the infamous Cornwall Incident. Overwhelmed with joy of seeing his daughter Francis couldn't help but picture a future where Lilly went back to her old self, the way she was when he loved her. They would've stopped using their powers and lived a normal life. However, at the same time, he couldn't help but see a future where he would end up killing his wife, either for vengeance or because she would've been too far gone.

Shortly after their daughter's birth, Francis finally decided to kill Lilly to protect their daughter. At the time, there was a Global Occult Coalition raid on their house due to her instinctive knowledge and eligibility to enact a world-wide ritual that would irreversibly regress human civilization to Neolithic standards. While Lilly was distracted by the water beginning to pool under the door to their bedroom, Francis grabbed a gun from underneath their bed and shot her before she could tell him something.

During the Foundation's search of the house, the six girls later designated SCP-231 were found in the house, impregnated. She was summarily classified as both SCP-4231-A and SCP-231-1, and recorded as "killed during initial recovery, after giving birth to SCP-██" (SCP-166). Her remains were later used by Dr. Scranton to form a new Scranton Reality Anchor, however, Lilly's soul remained trapped within her remains and went to possess the Anchor, having forgotten most of her life, but slowly remembering.

Lilly was described as having fair skin, brown eyes, and blonde hair. She is five-foot and seven inches tall, looks twenty-eight years old, and weighs one-hundred and fifty pounds. Francis described her as having horns and hooves similar to those of a reindeer, a mouth full of teeth, and a thousand eyes, having "starlight in her eyes". He also described her as being "beauty and nature incarnate".

Being an experienced reality-bender, Lilly could warp reality around to whatever form or state she liked. She could create and change the structures to how she liked and used her powers to subjugate Francis. After learning of various rituals connected to the Scarlet King she seemingly became connected to the evil god and brought his influence into her house. After her remains were turned into a Scranton Reality Anchor, she was able retain her sapience, albeit losing some of her memories and powers. 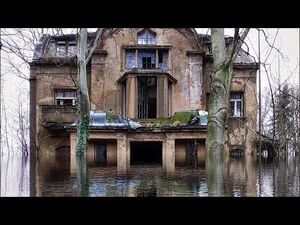