Kidnapping children and enslaving them.
Making "gifts" in forms of toys to certain families.

Keep performing the rituals and avoid being captured by the SCP foundation (both succeeded).

SCP-4666, also referred to as The Yule Man, is a Keter-class object under the SCP Foundation's observation. It is a humanoid figure that travels around the world killing families and kidnapping children.

SCP-4666 was originally one of the many evil names belonging to SCP-5925, one of the fairies from SCP-4000 who was able to gather a number of names which transformed him into Santa Claus. However, after he lost a number of his name, one of his evil names manifested as the Yule Man who began kidnapping children and forcing them to make toys out of the bodies of fellow kidnapped children.

SCP-4666 was first brought to the Foundation's attention in 1974, when its anomalous properties were first witnessed by Foundation personnel and the stories were first recorded, though the reports of the entity date back to circa 1498.

Web and media traffic is monitored by the SCP Foundation, and forces are deployed if a family is suspected of being targeted by SCP-4666. All reports of killings are falsified to appear as non-anomalous home invasion murders, with evidence confiscated. Despite this, SCP-4666 has yet to be taken into custody.

In 2018, an SCP-4666-1 Event in Hoonah, Alaska produced a large doll made from an emaciated body of a child. However, the child, named Ekaterina Morozova (aged seven) was still alive, though unconscious and dying. She was rushed to a hospital, where she was interviewed by a Foundation researcher. She told him that she, along with many other children, were abducted in a bag after being forced to watch their families killed. They were then brought underground to a series of tunnels, where SCP-4666 forced them to make the toys out of the body parts of other abductees with minimal sustenance for years. If they stopped working at any time, even by falling asleep, they were denied food and water and were tortured by hitting, burning, biting, or being cooked alive in a furnace and devoured in front of the other slaves. However, when a child is no longer able to make toys, they are added to the materials used to make them. Morozova got sick and could no longer work, so SCP-4666 had the others partially mutilate her and make her into a doll, rendering her unconscious until she was "delivered" to the next family and rushed to the hospital. However, only 18 hours after her discovery, Morozova died from multiple organ failures resulting severe malnourishment.

As a result of Site-100's manipulation, SCP-4666 was introduced to SCP-231-7. After this, once in every twenty four hours, SCP-4666 visited 231-7, doing something to her, which replaced procedure 110-Montauk and also lessened the psychological impact on the girl, while 4666 collected the "inhabitants" from 231-7 to make toys, sparing the innocent children from 4666 and effectively nullifying the threat of both SCPs.

SCP-4666 only becomes active for twelve nights every year, from the night of December 21-22 to the night of January 1-2, manifesting and seemingly teleporting to any location above 40°N latitude, where it will designate a household and family, always with one or more small children under the age of eight.

Reports state that on the first through seventh nights of SCP-4666's "active period", the children of the household will catch sight of SCP-4666 around their abode, standing in the distance. Occasionally, children will wake at night to see a figure standing outside their windows watching them sleep.

On the eighth through eleventh nights of activity, the entire family, including adults, will report hearing footsteps on their roofs or in their attics, as well as a putrid smell emanating from an unknown source. Many reports say the families describe the experiences to be similar to that of a haunting, and may assume it to be such.

On the twelfth and final night of activity, one of two scenarios will occur: the more common one (known as a Weissnacht Event) or an uncommon one (which has been designated as an SCP-4666-1 Event):

In the case of a Weissnacht Event, all members of the victimized family will be incapacitated, restrained, and herded into a single room, where SCP-4666 will proceed to murder all members in front of each other with the exception of one child, which will be abducted. The methods of incapacitating, restraining, and killing vary with each incident.

In the case of an SCP-4666-1 Event, no physical harm will come to the family. Footsteps will be heard, but no sign of forced entry will be observed. In the morning, children will wake up to find toys at the foot of their beds, crudely crafted from the remains of deceased human children.

Though little photographic or video material exists of SCP-4666, reports have described it appearing as an extremely tall humanoid appearing to resemble an elderly male with white hair. Reports and survivors claim the entity is always completely nude regardless of weather or conditions. Fingerprints have been discovered at investigated locations, though they exhibit properties not found in humans, such as a double-whirl pattern. Hair has been found, though the DNA does not belong to any known creature, human or animal. Its teeth marks also do not match any known creature.

Non-canon fanart of SCP-4666 consistently shows it with inhuman facial features, including enormous black eyes and an unnaturally wide mouth filled with numerous long teeth. SCP-4666 is not described this way in the article itself, however. 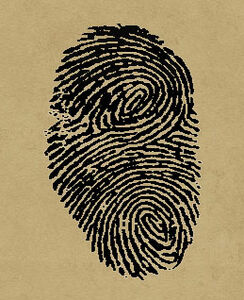 A fingerprint discovered at many of the murder scenes, possibly belonging to SCP-4666. Note the inhuman double-whirl pattern. 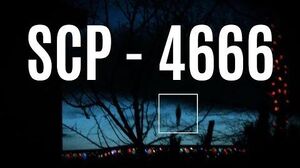 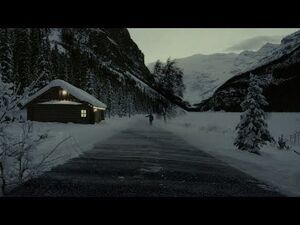 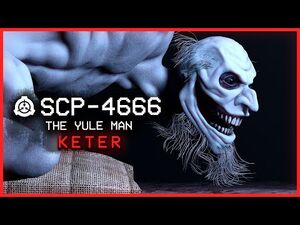 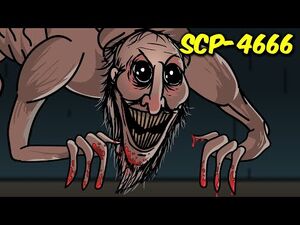 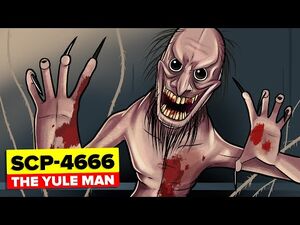