The One Who Knows Silence In The Earth

God of Sacrifice and Rituals

Remake all life in its own image.

SCP 4971-▽, also known as The One Who Knows Silence In The Earth, is a mysterious God within the SCP Foundation mythos, known mostly within occult circles. Due to what little is known of its nature as a God of Sacrifice, it is feared among the occult world and very few worship it.

SCP 4971-▽ itself does not have a clear origin, but references to the deity were found in ancient Celtic druidic texts that date back to before the Roman Conquest of Britain in 43AD. The druidic texts describe a cosmic force which they believed to be a nature God, which they named "The One Who Knows Silence In The Earth", whom they frequently offered sacrifices of human hearts as they believed this would appease the entity enough that it would allow them to hunt and give their tribes protection from the creatures of the forest. The documents describe the creature emerging from the dark frosted forests of the north to claim the payment the Druids offered. The documents also describe a symbol linked to the God itself, known as the Voxen Eye, which is described as a series of circles and triangles within each other. Medallions and pendants versions of the Voxen Eye were found in hidden caches of pre-Roman artefacts in dig sites within the British Isles.

Mentions of the God can be found in other, later occult documents throughout the ages, but they were rare and fleeting. A statue depicting the god was found in the ruins of a Faerie city below SCP-6666, meaning that the god was possibly worshipped by the Fae.

The Last Appeal of Biphi

While most of the documents regarding the entity have been fleeting and rare, one document goes into more detail on it and also contains guidance on how to open a gateway into the deity's own realm, which is known to the Foundation as SCP-4971. This document is known as The Last Appeal of Biphi. The document is a manuscript that was written somewhere between the sixteenth and seventeenth century by an abrahamic priest, which details the last words of a witch named Biphi, who was tortured to death by the church in order to "exorcise" her. The manuscript describes Biphi calling out to a number of different minor deities, but the last one she called out for was never mentioned by name only descriptions, which was the true last appeal she made. It describes that during her final moments, Biphi carved the Voxen Eye, the symbol of The One Who Knows Silence In The Earth, into her chest. The entity is considered to be Bihpi's true last appeal.

The Last Appeal of Biphi originally had six copies, however, only one survived into modern day. Three of the other copies were burned by other priests, one was lost at sea in the 1870s and the fifth copy was bought by a man named Oswald Carter, who then proceeded to burn it. The final surviving copy was found in Hitler's bedside table when the Allies entered Berlin during the final days of World War II. The document then found its way into the libraries of Miskatonic University, where it was split in half by Dr Damon Wells, who gave the back half of the document to the Foundation for safe-keeping. The other half remained within the university, until it was eventually taken by occultists when the building was burned down.

The Foundation encountered the other half of the The Last Appeal of Biphi document when it was used to summon a lesser deity during the 80s, which was severe enough that every American task force member knows about it. However, they failed to recover the manuscript and it once again disappeared into the hands of the occult world, later ending up in the possession of the Daughters of Eden, a group of occult environmentalists.

In 2006, the Foundation raided the Daughters of Eden and detained a number of its members, hoping to recover the other half of the manuscript, but could not find it.

In February 2007, the Foundation was alerted to a possible space-time anomaly that had appeared within the abandoned Southwood Park Mall, located in Havensbrook Indiana. Local law enforcement had responded to reports of a break-in within the old abandoned shopping mall, with eyewitnesses claiming to hear screams and unnatural sounds coming from within the old building, but had themselves gone missing when they entered it to find out what was going on, with the final recordings showing the officers in a state of panic.

The Foundation then moved in and secured the area, discovering that the inside of the mall was now a gateway into SCP-4971; a realm of endless forest, mountains and valleys. The trespassers who broke into the mall were later identified as an extremist branch of the Daughters of Eden occultist group, led by Katarina Randolph, an eco-terrorist. Anna Christian, a member of the main Daughters of Eden group and occult witch who was still in Foundation custody from the raid a few months earlier, was interviewed by the Foundation regarding The Last Appeal of Biphi and what happened within the mall. Anna explained that Katarina had joined the Daughters of Eden recently in the hopes of learning their secrets and power in order to stop the ever increasing industrialisation of the planet, which she referred to as "the bile of man". She tells the Foundation that despite learning genuine magic from them, Katarina became frustrated with the group, as she considered their efforts of rusting metal and turning farmable land into mud and ooze in order to ward off developers to be far too soft and non-threatening. However, she quickly became very interested in The Last Appeal of Biphi and the final most powerful entity described within it, believing it to be a servant of Gaia.

Anna informed the Foundation that she had attempted to warn Katarina that the entity was not a guardian of nature like she thought it was. However, Katarina had simply dismissed her and the other members of the group as being too afraid to do what needs to be done and so stole The Last Appeal of Biphi, journeyed to the abandoned Southwood Park Mall with great number of like-minded individuals and used the ritual described in the book to open a gateway into the Gods realm within the mall, which caused the space-time anomaly.

When the Foundation asked what exactly The One Who Knows Silence In The Earth was, Anna explained that it was not a nature God or a servant of Gaia like they had originally thought, but a God of Sacrifice and Rituals, who wants to remake all life into its own image. She states that the world this God would bring about is one where humanity does not survive, as she says it would be akin to replacing rivers of water with rivers of battery acid. The Foundation already knew of a way to close the gate Katarina had opened, as their half of The Last Appeal of Biphi manuscript describes a reverse-incantation that could be used to close a summoned gateway using a number of human hearts. However, the number of sacrifices required to close the gate increases every half hour, timing the requirements by itself every time. By the time the Foundation had secured the mall and discovered the gateway, it was by then far too late, as The Last Appeal of Biphi stated that "every human heart that has not known silence" was now needed to close the gate.

With this in mind, the Foundation asked Anna if there was an alternative way to close the gate Katarina had opened inside the mall, to which she stated that there is not and that the cost of closing it was now far too high, which they already knew.

The Foundation encountered the God during the first two task force expeditions it sent through into SCP-4971. Both times, the two teams were briefly chased by the creatures that inhabited the Gods realm, which were a mixture of reanimated humans (including the now transformed Katerina Randolph and her followers) and animals that the God had remade in its own image; replacing the head with a Voxen Eye-like symbol.

Both times, the teams encountered The One Who Knows Silence In The Earth who appeared out of thin air within the valley, before they were all killed and transformed by the entity into its own image like Katerina's group was.

Following the success of the cross-testing of anomalies at Site-100, SCP-4971-▽ was cross-tested with SCP-6000, an artificial expanding Way created by the Serpent's Hand. This resulted in SCP-6000 being relocated within SCP-4971, with it not only converting the dimension into a new section of the Wanderer's Library, but also further expanding it, minimizing the chance of SCP-4971-▽ finding it's way to Earth. Furthermore, SCP-4971-▽ became attracted by the ritualistic practices done by the Librarians, possibly suggesting that it will soon attack the Library.

The One Who Knows Silence In The Earth appears as a colossal deer/stag with a large Voxen Eye in place of a head. The Eye is more detailed than the one depicted in the Last Appeal of Biphi and also has two glowing white antler symbols floating next to it. A large pitch-black circle can be seen in the middle of Eye. It also has multiple glowing white orbs orbiting around where the neck should be, which each give off their own glowing particles as they spin.

While the true extent of its abilities are unknown, The One Who Knows Silence In The Earth is clearly a very powerful Old God. Some of its known powers consist of: 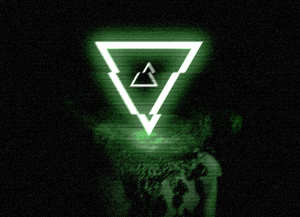 A reanimated humanoid encountered by the Foundation within SCP-4971. 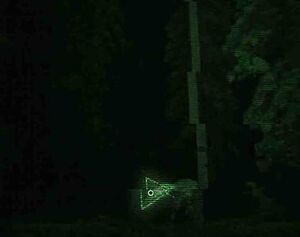 A reanimated animal encountered by the Foundation within SCP-4971. 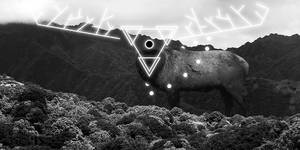 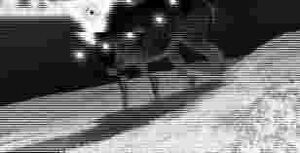 The Foundation briefly encountering The One Who Knows Silence In The Earth before dying. 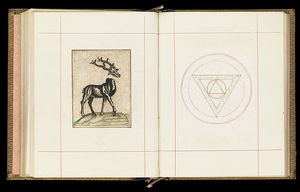 A representation of The One Who Knows Silence In The Earth and its symbol the Voxen Eye within the Last Appeal of Biphi.

An image taken by the Foundation expedition team showing the interior of the SCP-4971 dimension. 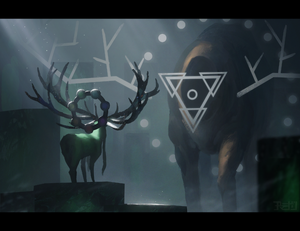 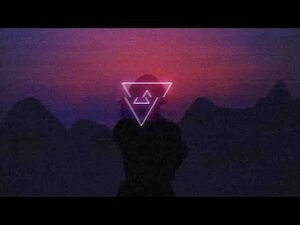 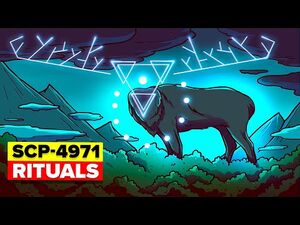