SCP-4975, also referred to as Time's Up, is an antagonist in the SCP mythos. It is a Euclid-class object under the SCP Foundation's containment. It is capable of breaching containment, but appears in its containment cell, disabled, when attacking prey. Its classification to Keter-class is currently pending.

SCP-4975's containment cell is a 4x4 cell comprised of steel barrier. Surveillance is to be monitored from time-to-time, no human is allowed to interact with the beast. Any suspicious activity is to be reported to the SCP Foundation for further notice is SCP-4975 make most sound.

When attacking, it will completely evaporate behind any solid material or in close range to the target. It will then produce a clicking noise by moving its vertebrae, being able to stalk its target for several months. Only the victims to SCP-4975 can hear the clicking noise. Once it stops, it proceeds to kill its target, which it does through either beating the victim to death or tearing them apart. When the prey is killed, SCP-4975 will begin devouring them as a food source.

SCP-4975 was discovered in folk tales in Germany, seen in some images and photos as a humanoid, beaked figure seen attacking numerous people as far back as the sixteenth century. In an accident residing from the Black Forest in Germany, a man had been hearing ticking noises. He believed he was being stalked, or that it was a cruel prank. Foundation Agents took the man into custody, and when they took him to the last place he had heard the clicking noises, the man had pointed to a tree. The foundation agents did not notice anything suspicious. Later, the man was attacked by an invisible SCP-4975, and while the Foundation Agents had tried to pull the creature off, they were forced to terminate the man following SCP-4975 beginning to attack. Camera surveillance shows during this attack that SCP-4975 was frozen still in its containment chamber.

SCP-4975 is a gray bird-like creature with a sharp beak, a humanoid body, spider-like slim arms, a curved stomach, thin, long legs, and a tail. 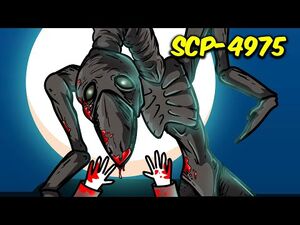