Carrying the actions described in its narrative.

SCP-582 or "A Bundle of Stories", is an antagonist in the universe of the SCP Foundation. It is a Keter-class entity which when written about it, it would manifest itself nearby the place where the story was written and carry out the acts as described in the story.

SCP-582 is a self-proclaimed "meme" of unknown origin. It existed since the ancient times as it was worshipped as a deity by the Daevites whom they knew it as the Eternal Text. The deity would help the Daevites to survive past their imminent destruction by helping create SCP-140.

SCP-582's main type of ability is to modify reality. Any fictional writings about the SCP-582 will transform into a manifestation by the SCP, in which SCP-582 will do all the actions written in the narration. This can occur anytime and anywhere. There are no criteria of a location where this could begin, whenever there's a chance, the manifestation will occur.

Descriptions about SCP-582 are forever and always increasing. If a narrative contains a contradiction from the previous events, it will most likely have no effects on SCP-582, or it will be minimalized to the point of the events barely occurring. SCP-582's skills are nebulous and are missing details. What is notable about SCP-582's skills, is that SCP-582 can appear and disappear at any moment and that there's no point in terminating SCP-582.

As a result of being depicted as a deity, every time SCP-582 appears it takes different forms which described as "avatars". These forms, or Manifestations, vary in appearance and powers, and would often be merged with one another. Manifestation Alpha was described as the least dangerous of all Manifestations as it caused death only 23% of times when appearing. While in Manifestation Gamma, SCP-582 would produce intense white light and radiation and its strength is immeasurable. While in Manifestation Zeta, SCP-582 existed in higher dimensions, causing it to be unable to fully being perceived and cause death to those who looked at it. If SCP-582's Manifestation Zeta were allowed to evolve into Manifestation Zeta Prime then it would cause an XK-class scenario. This could mean that the entity seen by people is in actuality q projection of a higher being who can access the human world only through stories which are written about it.

Manifestation Beta was described as being the most aggressive of Manifestations as it would attack anyone whenever it could, while Manifestation Gamma seemingly ignored any external stimuli. Because of this, one Foundation doctor studying SCP-582 claimed that the entity and its behavior was simply a reaction to the stories written about it and possessed no consciousness or free will. However, based on its interaction with Roger Legrand and its followers, it becomes evident that SCP-582 has at least some form of sapience but to what capacity is unknown. When interacting with a surviving member of the Horizon Initiatives's Wolves who had attacked its followers, SCP-582, in the form of an angel named Bertrien, brainwashed the member into one of its new followers. 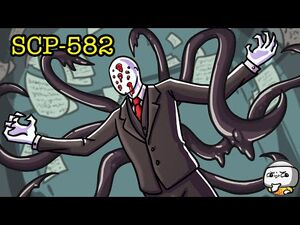 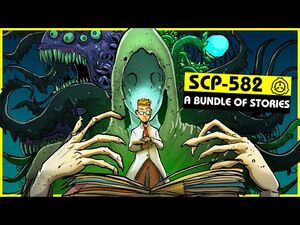