Making others obsessed with it.

Mentally destroy those who interact with it.

SCP-589, also known as the Obsession Doll or simply The Doll, is a Keter-class SCP is that currently contained by the SCP Foundation.

SCP-589 is a seemingly self-aware doll that can change form, as well as mentally manipulate and please those who interact with it.

The exact origins of the SCP are unknown, but what is known is that the Foundation tracked it down as they noticed certain products existing in rural areas, causing entire populations to die due to massive riots. The Foundation intercepted the SCP by studying patterns of how the product appears in certain locations, and having a distinct life cycle.

Due to the dangerous abilities it has, it is currently kept in a reinforced container that is welded shut, and only a very small selection of Foundation staff with the proper high-end clearance are allowed near it. Those who are cleared to interact with it must undergo psychological evaluations afterward.

SCP-589 is a stuffed animal that changes appearance based on the subjective desires of the first person who interacts with it. Once someone is in possession of the SCP, it creates a calming sensation. When this happens, the SCP begins a memetic effect that spreads copies of itself, including pictures of itself. The higher the quality of the SCP (in other words, the product that the SCP takes the shape of) at a given time, the greater the memetic effect. The good feelings created by possessing the SCP is similar to taking narcotics, as it stimulates the brain in a way that reduces stress and creates euphoria, as well as making users chemically addicted to the product that the SCP makes itself.

Those affected by the SCP will be compelled to spread the product around and make more of them. The true danger of SCP-589 comes to fruition when it suddenly disappears. Anyone who was in contact with the SCP will suddenly feel withdrawal symptoms due to the SCP no longer being around to comfort them. The symptoms of those suffering of include the following: manic depression, psychosis, heightened aggression, uncontrollable despair, dementia, mania, paranoia, and various other behavioral disorders.

The SCP prefers to target those with high amounts of stress in their lives, as well as low self-esteem, as they are much easier targets for the SCP's malevolent objectives. The reason for SCP-589's malevolent nature is unknown, but it is speculated that it simply feeds off the pain of others. The Foundation speculates that SCP-589 is sentient, or being controlled by a sentient unseen force, due to the formulaic way it works.

SCP-589 does not directly speak or communicate with others in any way, but its true nature is easily shown in its actions, and what it does to people's mental states. It forces a dependency to anyone who comes in contact with it, then suddenly disappears, leaving people in sheer distress, which includes horrific mental unbalance fits of rage that cause others to kill each other, something that can affect entire cities.

The SCP repeats the cycle whenever another person comes in contact with it. This shows that the SCP only wants to continuously spread misery, violence and pain to others without remorse or hope of rest. It will even make easy targets of those with self-esteem and stress issues, showing the SCP-589 is not above manipulating vulnerable people. 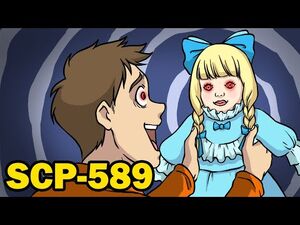 SCP-589 on the official SCP Wiki