Survive (both succeeded, failed in tales)

SCP-6096, also known as the Guest, is a Keter-class anomaly under the SCP Foundation's observation. It is a mysterious entity with mind and behavioural control abilities powerful enough to control anyone who sees it and make them physically unable to harm it. SCP-6096 is arguably one of the most terrifying SCPs as it is so powerful that even the Foundation does not attempt to contain or stop it.

SCP-6096 is an entity of unknown appearence that always hides beneath a cotton bedsheet. It is approximately 1.55 metres tall and weighs 48 kilograms. Nobody has ever seen under 6096's bedsheet, as its influence prevents anyone in the vicinity from removing the sheet.

It is impossible for anyone to intentionally harm SCP-6096, to order or trick other people into harming it, to leave SCP-6096's presence when this would expose it to harm, or to commit suicide if this would negatively affect SCP-6096.

While SCP-6096 is usually docile, at certain intervals it becomes fixated on one person randomly selected from the population of Earth and will begin moving at walking speed towards the target. Anybody who sees SCP-6096 during this period will immediately become aware of the target's name and location and feel compelled to help it find and restrain the target. Once SCP-6096 reaches its victim (who can harm it, but will normally be restrained by SCP-6096's unwilling entourage), it will trap them under its sheet and perform an unknown action on them. The victim will struggle with 6096 for twenty to forty minutes, but will ultimately vanish entirely and presumably die. According to Foundation documents, "the cries of distress emitted by these victims suggest that this process is extremely painful". These victims have included infants.

SCP-6096 was discovered and contained by the Foundation in 2018 after it attacked a family in New Mexico and killed/vanished sixteen-year-old Desmond Mallion. The police responders were unable to remove SCP-6096's sheet and so the Foundation were called in. SCP-6096 did not attempt to resist and is currently "contained" at Site-19 by Mobile Task Force Zeta-29. However, due to its powers 6096 is able to leave containment whenever it likes and go out to claim more victims. For some unknown reason, it considers being contained by Zeta-29 to be beneficial, and so the Foundation are unable to remove the Task Force's leader Charlie Symanski as this would harm the being. Whenever 6096 leaves to claim a new victim, the Mobile Task Force are compelled to assist it in reaching the target before tranquilising or restraining them. This has driven most of the officers involved to alcoholism.

According to Symanski, who hates SCP-6096 and has repeatedly attempted to kill it, there are three ways in which it could be killed:

However, it is unlikely that any of these things could take place by themselves, and it is impossible for them to be caused deliberately. Ultimately, the Foundation do not believe that they can successfully kill SCP-6096 and it is almost certain that a genuine mistake to cause one of the above scenarios will not happen.

Following the success of the cross-testing of anomalies at Site-100, SCP-6096 was cross-tested with SCP-920, a man who causes anyone who encounters him to become lost. When SCP-6096 and the MTF were going to its next victim they encountered SCP-920 who, just like the MTF, became compelled to help 6096. However, as a result of 920's properties, 6096 became lost and was unable to locate its victims, enraging it and causing it to target 920. As 920 has greater endurance than the average human, 6096 was unable to kill it and the two continued fighting as a containment zone was set up around them. 6096 is currently still trying to terminate 920. 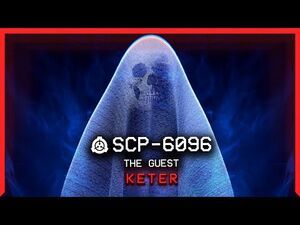