Hunting in the swamps (formerly).

Become human again (according to SCP-978).

SCP-811, also known as the Swamp Woman, is a Euclid-classed humanoid from the SCP-Foundation.

SCP-811 had an interview with Doctor Trebuchet. In the interview, the Doctor feeds SCP-811 with a frog. The Doctor started asking SCP-811 what does she remember of her past. SCP-811 then started describing a man how did he look like. The Doctor questioned her trying to see what is she trying to say. He asked if SCP-811 used to have the same skin as humans. SCP-811 continued explaining till the end where she explained that she ate the man, and red-blood started coming out from her mouth.

She appears to be a female humanoid with long thin limbs with a slightly bloated abdominal region. Her skin appears to be a mottled green color, which could be considered as a camouflage. Her hair appears to be oily black, which is resistant to shampoos. While it appears that she is decently capable of the human language. The surface of SCP-811's skin appears to be a green mucus. If any other organic matter gets in contact with her, it would rapidly get decomposed.

SCP-811 is able of absorbing liquid through her green skin, into her system. Tests have shown, that her system is totally filled in with liquefied decaying matter. SCP-811 has no defecation, instead her cellular waste and substances aren't able to collect anything inside of her stomach. Inside of her stomach are enzymes and bacterial flora, which cause to congeal into a tar-like substance which SCP-811 uses for hunting. SCP-811 would mainly aim for the victims' face or on the wounds. SCP-811 would wait until the victims die and then try to eat her victims. 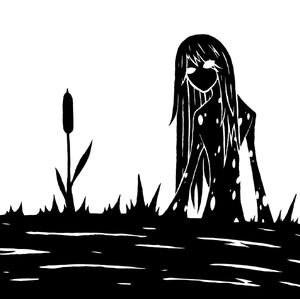 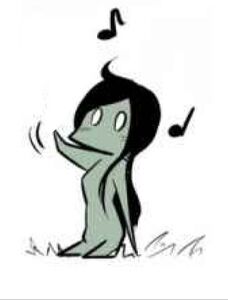 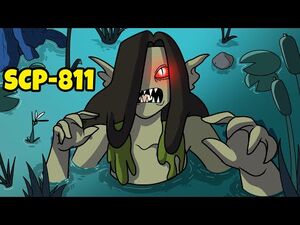 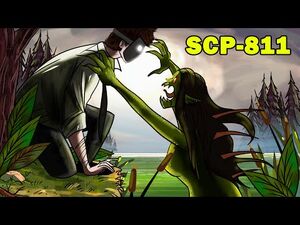