The Guardian
The Forest Beast

SCP Creature of the SCP Foundation

SCP-860-2, also known as The Guardian or The Forest Beast, is a unidentified SCP classed creature, which only appears in the SCP Containment Breach.

The creature does not have an official SCP wikia page, but it is featured in the game.

SCP-860-2 appears to be a creature which would attack the protagonist instantly. The creature has various wooden body parts and yellowish-white glowing eyes. It also appears to have various amounts glowing yellow symbols around its neck and forehead. 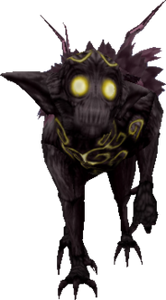