Somewhere in the Pacific Ocean

The Shadaloo Intimidation Network is the antagonistic organization in Street Fighter IV. S.I.N is the weapons division of Shadaloo, although many believed it was the remains of the fallen Shadaloo. In fact, it became an independent organization after M. Bison's death in the second World Warrior Tournament, having all operatives of Shadaloo transferred to SIN after this. Their goal is to complete the BLECE project, a bio-weapon that would allow them to conquer the world. It was devastated by the resurrected M. Bison and his enemies, the Street Fighters (Guile, Chun-Li, Abel), though the two parties were unaware of each other's presence.

As a division of the criminal organization Shadaloo, S.I.N. is responsible for weapons of many designs and fields of interest. While they research and develop weapons of technological and scientific basis, from what has been gathered from the Street Fighter series itself, S.I.N. also delves into subjects like the occult, the paranormal, and metaphysical philosophies, having helped perfect the Psycho Drive for Bison, using its research on Qi (more commonly referred to as ki) and Feng Shui to create the Tanden Engine, and the BLECE Project, related to the powers of the Satsui no Hado. To further realize the success and possibility of their pursuits of power beyond physical standing, they oversee the capture, detainment and experimentation of anyone with significant standing of abilities aforementioned, including martial artists in particular.

S.I.N was led by Seth, one of the 26 enhanced beings that use data collected from world warriors (Seth specifically is referred to as #15) to create a deadly style of mixed martial arts. The remaining scientists and smugglers of Shadaloo were transferred over to S.I.N. under the management of Seth to work behind the scenes on new weapons and the BLECE project. Seth claims superiority as a result of his sapience, while dismissing the others as merely puppets. His storyline indicates that he plans to control remnants of Shadaloo through S.I.N. after Bison's apparent death at the hands of Akuma in the second World Warrior tournament. Unbeknownst to Seth, the scientists also worked on a new body for Bison. Seth hosts a global tournament in hopes of luring Ryu to complete the BLECE project, but is dismayed at reports that Bison has once again returned from death.

Bison finally encounters Seth and defeats him in combat, and afterwards tells him everything that has happened has, in fact, gone according to plan. Bison takes lead of the remaining copies of enhanced beings, and they wreak havoc on the fighters in and around the S.I.N. compound, as most of the characters's endings depict them defeating a version of Seth. Afterwards, Crimson Viper would encounter a weakened Seth and finish him off; she also sought to acquire the data on BLECE and turn it over to her employers (the CIA) after the tournament. Unfortunately, the data pertaining to BLECE was destroyed by Cammy before Viper had a chance to copy it, resulting in several years of investigation disappearing into thin air.

The data linking Shadaloo to S.I.N. is not destroyed, however, and is recovered by Chun-Li prior, while Vega set off the base's self-destruct system. While Chun-Li retrieves the data, Vega, who is assisting Bison in his attack on Seth's S.I.N. organization by stealing valuable data, attempts to kill Chun-Li by setting off the fire alarm, which releases a toxic, fire-retardant spray. Guile, who lost contact with Chun-Li, tried to race over to her location to rescue, but was knocked down by another one of Seth's enhanced beings. Abel then tackled the being, and told Guile that Chun-Li was up ahead. Guile rescued Chun-Li and escaped the facility with her and the data. Abel and Vega escaped as well. 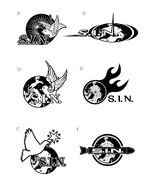 Retrieved from "https://villains.fandom.com/wiki/SIN?oldid=3366777"
Community content is available under CC-BY-SA unless otherwise noted.