The Luna Diviner
Demonic Dancing in the Moonlight
Number VII

To gain a heart.

Isa was the best friend of Lea, the original self of Axel, being the foil to his friend's zany antics. Prior to their attempt to infiltrate Hollow Bastion, Isa and Lea find Ventus. Watching Lea cheer the boy up, Isa joins his friend in sneaking in before they are thrown out of the castle by Dilan.

Years later, Isa's heart was removed from his body by Terra-Xehanort, creating Saïx.

Saïx plays a relatively important role in Organization XIII, assigning missions to all the other Organization members. Saïx is the one who gave Xemnas's orders to Axel to eliminate traitors their Organization in Castle Oblivion. It is generally accepted by the remaining members that at this point the two planned to not only eliminate traitors, but also anyone who stood in the way of their plan, such as Vexen and Zexion. Saïx is also revealed to be the one who picked which members would be going to Castle Oblivion, namely the members suspected of being traitors, as well as anyone else who was "getting in the way".

After Axel's return from Castle Oblivion as his growing friendship with Roxas and Xion, a rift between Saïx and Axel begins to form. He eventually confronts Axel of this, as their friendship is more concrete because their original selves were best friends. Eventually, Saïx dismisses his previous plans with Axel as "just an idle fantasy", as they both have changed too match for them be friends anymore.

Working on Organization XIII's plans for Sora with Xemnas, he later challenges Roxas to a battle of will when the Keyblade wielder attempts to leave Organization XIII. He loses the battle, and Roxas escapes. Up until Xion's destruction and absorption at the hands of Roxas, Saïx views the Sora copy as nothing but a mere, hooded puppet. He even insists that the others would say "it" when referring to Xion, rather than "she".

After Xion's end, Xemnas orders Saïx to retrieve Roxas, who is on his way to the Castle That Never Was to defeat Organization XIII and free Kingdom Hearts, because he believes it will resurrect Xion. While not confronting Roxas himself, it is possible that Saïx was the one who sent the Neoshadows after Roxas, who destroys the Heartless easily.

Saïx first appearance is in Hollow Bastion, along with all surviving and loyal Organization members to taunt Sora.

Upon Sora's second visit to Twilight Town, the trio fight off several Nobodies that were attacking Seifer and his gang. After they save him, Saïx appears before them, applauding their battle skills. He warns them of a traitor in the Organization: Axel, and he says that he might be in Twilight Town somewhere. Sora insults the Organization, remarking on how they're "not a very organized Organization". Saïx is unfazed, and tells Sora to watch his back, for Axel will stop at nothing to turn him into a Heartless. Sora declares he is not worried, prompting Saïx to remark that the Organization would want nothing to happen to Sora. He also cryptically remarks that the Organization knows how to "injure a heart". He then opens a portal of darkness behind him, and Sora thinks of jumping in after him, though Saïx overhears this and advises not to do so, lest he end up like Riku.

Sora inquires as to what he means, but Saïx immediately leaves to report to Xemnas that he succeeded in placing Sora in a state of confusion and frustration to keep him going toward their goal. Saïx also states that Axel may prove a thorn in their side, which leads to Xemnas giving him orders to deal with the renegade.

Saïx next appears in Hollow Bastion during the Heartless invasion, interrupting Axel and Sora's conversation, and forcing the traitor Nobody to flee. Saïx ensures that Axel will be rightly punished, but Sora is not mollified, his only goal being to enter the realm of darkness to rescue Kairi. His face unreadable, Saïx asks Sora to prove just how much he cares about Kairi. In response, Sora actually gets onto his knees and begs at the Nobody's feet. Seeing Sora's devotion to the Princess of Heart, Saïx sees this as a further opportunity to enrage and confuse Sora so that he might further the Organization's goal. He refuses Sora's wish, eliciting a hot fury. Bending Sora's anger to suit his own needs, Saïx convinces Sora to destroy more Heartless so that the hearts held within them are released by the Keyblade. Then they may flock to Xemnas's synthetic Kingdom Hearts, which will be all the closer to completion because of it.

At that moment, Maleficent appears, declaring with much aplomb that Kingdom Hearts will belong to her. She summons more Heartless to attack Saïx, despite Sora's protests, but Saïx calmly summons several Nobodies to destroy the attacking Heartless. Maleficent then places herself between Sora and the Nobodies, telling him to devise a way to vanquish the Organization. Swarmed by Nobodies, she is overwhelmed and disappears, allowing Saïx to resume convincing Sora to release more hearts. But before he can finish his ploy, Sora, Donald, and Goofy are rescued by a portal of darkness that swallows them up (which was Maleficent's doing).

The World That Never Was

Saïx is seen again talking to Kairi in her cell in the Castle That Never Was within the world of Nobodies. He tells her, much to her horror, that she is the "fire that feeds Sora's anger." Kairi realizes that Sora is getting lured into a trap all because of her. However, Naminé unexpectedly appears in her cell, and rescues her through a portal of darkness. The two halves then begin fleeing the Castle to try and make good their escape. Saïx soon appears and attempts to stop Kairi and Naminé, but Riku (still cloaked and in the form of Xehanort's Heartless) attacks him from behind. Saïx does a back flip in the air, and lands a few feet away. Riku slams him up against the wall, intending to finish him once and for all. However, Saïx opens up a portal behind him and sinks away into the wall with a smirk.

Saïx again appears in the Castle That Never Was to Sora, who had managed to work his way through the Organization's floating fortress with the help of Donald, Goofy, Riku, and Kairi. He looks lovingly upon his Kingdom Hearts, his source of power. He tells Sora that Kairi no longer needs him and makes a cryptic remark about a "friend from the darkness." Sora is not deterred by Saïx's manipulative comments, but Saïx is not concerned. He tells Sora that the Organization's Kingdom Hearts is nearly done, pointing to the heart-shaped moon in the sky. He then enigmatically asks Sora if he can hear the euphoria of the countless hearts he has harvested. He summons more Heartless for Sora to destroy, but his attention is quickly turned to Maleficent, who has also infiltrated the castle along with Pete. He takes this in stride, wondering in an amused voice if the intrusions will ever end, and soon after vanishes to check on Kingdom Hearts.

Saïx appears to Xemnas, who is watching Kingdom Hearts come closer to completion. He asks the Superior if he can end this "charade," and Xemnas grants him permission. Sora's part in their plan is done with and he can now safely be killed. Saïx smiles savagely and remarks that he's waited so long to hear that.

Saïx awaits Sora, Donald, Goofy, Riku, and Kairi in a room with a direct view of Kingdom Hearts: Addled Impasse. He calls Sora by the name of "Roxas", saying only he could have made it this far, though Donald vehemently states that he is Sora. Saïx seems not to care, simply stating: "Different name, same fate." Then, summoning his claymore, he creates a potent shockwave with sheer strength alone. This power manages to push away Kairi and Riku back towards the entrance of the room. He then quickly erects a force field, separating them from the battle, yet doing no harm. Them taken care of, he confronts Sora, Donald, and Goofy for the final time. He finally lets his outer decorum slip away. Under the influence of the moon, he becomes savage and unrestrained, truly a model for his Berserker Nobodies.

However, despite Saïx's great strength, speed, power, and skill, he is overcome. Defeated and mortally wounded, he limps away from Sora to the ledge overlooking the moon. With the last of his strength, he asks: "Why...Kingdom Hearts...Where is my heart?" All his power gone, he now fades back into darkness.

Isa is revived in Radiant Garden, along with Lea and the rest of Ansem's apprentices save Xehanort, and is heavily implied by Young Xehanort to be the "poor soul" Braig decides to take along with him on his own plans.

Saïx, revealed to have been infused with a fragment of Xehanort's heart, is made a member of the new Organization. When Lea attempts to save Sora from being turned into the thirteenth member, Saïx is sent to stall Lea, much to Lea's horror.

Along with Xemnas, Saïx appears to be one of the most "Nobody-like" of the Organization. Despite claiming to remember what possessing a heart was like, he behaves mostly as a cold, emotionless, and efficient operative until his final battle. He is very aware of how emotions are unreal to them, unlike other members who imitate their emotions. However, in 358/2 Days it seems he values his friendship with Axel from their time as humans over that which Axel has formed with Xion and Roxas - the former a friendship confirmed in the Secret Reports. This possibly indicates he believes that Nobodies cannot even try to genuinely show emotion or form a real friendship without having had one with another beforehand, thus having memories to fall back on; and he does in fact see Xion as nothing more than a mere doll. This friendship between them weakened due to how Saïx changed too much after becoming a nobody, according to Axel, leading to Axel's ignoring him for Roxas and Xion. Thus, Saïx has a colder demeanor towards Axel in the second game.

In almost all of his appearances, he acts very calmly, never losing composure in even the direst of situations. The only thing Saïx seems to "care" about is acquiring a heart and, by extension, Kingdom Hearts. More than any other member of the Organization, Saïx is portrayed as dedicated to their goal, repeatedly stating his desire to "truly, finally exist". Even his last words were to Kingdom Hearts, sadly asking for his heart. Though this doesn't make him blind to Xemnas' plans to use Kingdom Hearts for more power, as he had originally plotted with Axel to overthrow Xemnas - not for the same goals as Marluxia, but to regain their hearts. Saïx can also be quite cruel, claiming to know very well how to injure a heart. He had a keen insight into manipulating others, such as when he toyed with Sora's emotions by having him beg to see Kairi, only to refuse his request. Also proof of his manipulation skills is how he sent the "useless" members to Castle Oblivion under the guise of Xemnas' orders to clear the way for his and Axel's plans, moving up the ranks while eliminating any competition or rebellion.

But his usual calm exterior belies a savagery. In his final confrontation with Sora under the heart-shaped moon of Kingdom Hearts, he becomes a berserk force of destruction. Unlike his calm and reserved manner that is usual of him, in battle he roars, shouts, and attacks relentlessly with no sense of self control. In fact, he is practically psychotic under the influence of Kingdom Hearts. 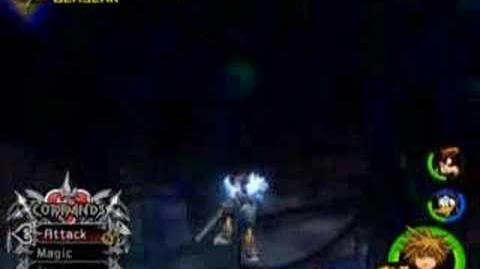