Practicing the traditions of Kyrat.

Eliminate those who oppose him.
Make Bahdra the Tarun Matara.
Have Pagan Min killed (all succeeded if spared).

He was voiced by Naveen Andrews, who also played Jafar in Once Upon a Time in Wonderland.

Sabal grew up idolizing Mohan Ghale, the founder of the Golden Path, and identified with his traditional values centered around the Kyrati religion, believing that the people need moral guidance from religion to guarantee peace, and often uses religion for political gain.

Sabal intends to crown Bhadra as the next Tarun Matara, who is seen according to tradition as a living goddess. He is also vehemently opposed to the drug trade in Kyrat. This places him at constant odds his rival, Amita and her progressive values. Amita accuses Sabal of intending to marry the child Tarun Matara in order to legitimize his authority in theocratic government.

Sabal is first seen in-game when he leads a raid to rescue the protagonist of the game, Ajay Ghale, the son of Mohan Ghale, who recently returned to scatter his mother's ashes, from Paul Depleur's compound.

For most of the game, both Amita and Sabal are allied with the player and, at least marginally, each other. However, they constantly disagree, and several times in the course of the game, the player is forced to choose between missions supporting Amita and Sabal. In many of his missions, the player is tasked with destroying drug fields and caches or rescuing stranded Golden Path troops or hostage. IN the final mission, Sabal has the player seize control of the Jalendu Temple, where he intends to crown Bhadra Tarun Matara. Sabal then orders the player to assassinate Amita, and her fate depends on the player's choice.

After the death of both Amita and Pagan Min, Sabal can be found in front Jalendu temple with Bhadra as the newly crowd Tarun Matara. Sabal proceeds to execute several Golden Path members by cutting their throats with his Kukri, stating that all "heretics" who betrayed Kyrat and its gods must die. After this, the player may shoot Sabal if they wish, though it has no further affects on the game. 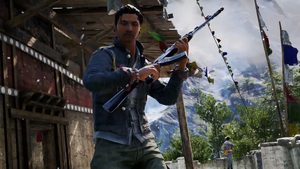