To get revenge on humans.

Destroy the Data Squad (both failed).

SaberLeomon is one of the main antagonists along with Merukimon and Gotsumon in the first 22 episodes of the anime, Digimon Data Squad.

He was voiced by Paul St. Peter.

SaberLeomon is a Mega Level Digimon that resembles a lion/saber-toothed tiger hybrid creature.

SaberLeomon first appeared when Gotsumon was discussing with Merukimon that the humans were the enemies. Gotsumon convinced SaberLeomon to join forces with him by leading his army into the Real World, but they were wiped out when they were sucked back into the Digital World by a mysterious scientist (who later turns out to be the evil Akihiro Kurata.

When Gotsumon arrives at SaberLeomon’s palace to report the defeat, SaberLeomon remembers the massacre of several Digimon from humans, and decides to get his revenge on all humans. SaberLeomon arrives in the Real World, and causes massive destruction at a nearby pipe industry and attacks MachGaogamon and Lilamon, while Marcus arrives on the scene to confront him. SaberLeomon fought the DATS and easily knocked out their Digimon, especially RizeGreymon, due to the fact that he was so strong.

SaberLeomon can slash his opponents with his mighty claws. He can also fire needles from his fur.

An Ancient Beast type Digimon that is said to move at the speed of Mach. However, much about him is shrouded in mystery, and one theory states that Leomon obtained this form when he became more beast-like. With his Mach speed, he can avoid even very quick oncoming attacks easily. His two greatly-developed fangs and sharp claws are full to the brim with destructive power, destroying Mega-leveled Digimon in one blow. His special attack is "Infinity Arrow", which hardens the countless hairs on his mane, and fires them at the opponent. The hairs are full of toxicity, and those who are stabbed by them are paralyzed. In addition, his "Nail Crusher" attack is a frightening technique which uses his huge claws to tear the opponent into eighths. 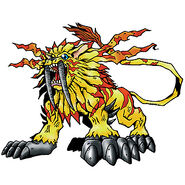