Use the grail to undo her mistakes in life (abandoned).

Artoria Pendragon Alter (in Japanese: アルトリア・ペンドラゴン・オルタ, Arutoria Pendoragon Oruta), also referred to as Saber Alter (in Japanese: セイバー, Seibā Oruta), is the name attributed to the corrupted version of Artoria Pendragon in the Fate series. She debuted as a major antagonist in the Heaven's Feel route of the visual novel Fate/stay night. By extension, she is a major antagonist in the Fate/stay night: Heaven's Feel anime movie trilogy that serves as an adaptation of the route. Saber Alter also appears as the secondary antagonist of the prologue of Fate/Grand Order: Observer on Timeless Temple, which was adapted into the movie Fate/Grand Order -First Order-.

Saber Alter makes several appearances in both the Fate series and Carnival Phantasm; in the Heaven's Feel route, Saber becomes corrupted by the darkness by Angra Mainyu and becomes Dark Sakura's servant, Saber Alter. Saber Alter abandons the ideals that the original Saber had, which easily disgusts Gilgamesh as he prefers the more idealistic Saber when she was resisting him. She also appears in Fate/kaleid liner PRISMA☆ILLYA, but a black face mask covers her eyes as a class card.

In Carnival Phantasm, she has several cameos in Episode 7 as both a figure and a figma, and in Episode 8, Saber becomes so angry and frustrated with Gilgamesh that she transforms into Saber Alter, whose darkness instantly attracts the men eating at Ahnenerbe, including Gilgamesh. She later reverts back to her old self as standard Saber when she comes back home to Shirou from work.

It was stated that Saber Alter isn't a true villain, but rather a dark heroine.

Saber Alter is a negative palette swap of Saber. Her skin and hair are even more pale, and her dress is black while her armor is darkened and becomes dark purple, with several blood-red linings painted on it. She carries a black sword with blood-red linings and has yellow eyes.

For casual clothes, she wears black gothic lolita fashion, and in Carnival Phantasm, while working as a waitress, she wears a black version of Saber's waitress outfit. 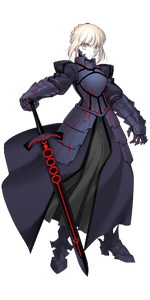 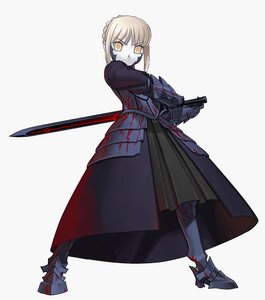 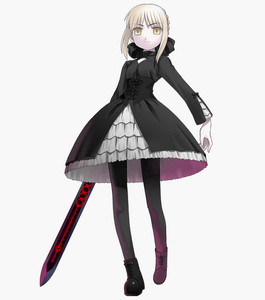