Complete the hit for Hanaway (succeeded).

Sabine Moreau is a major antagonist in the 2011 film Mission: Impossible - Ghost Protocol. She is a French mercenary for hire who is in league with Kurt Hendricks.

She was portrayed by Léa Seydoux in her first villainous role, and she would later play the Loner Leader in The Lobster.

Sabine Moreau was born around 1986 in France, and became a mercenary for hire who always paid herself in diamonds. It's implied that Moreau previously worked with Kurt Hendricks, and has committed contract killing for him in the past.

Later, Moreau arrived at the Burj Khalifa in Dubai to make an exchange with her employer Kurt Hendricks' right-hand man Marius Wistrom to trade the launch codes for diamonds. However, Ethan Hunt and IMF chief analyst William Brandt tricked Moreau into believing that Ethan was Winstrom, but Moreau then realized that they both were IMF agents and ordered her men to kill them. She then tried to escape but was caught by Jane Carter, one of Hanaway's team members who wanted to get revenge on Moreau for killing him despite Ethan's warning that they needed her alive as she had information.

Carter then brought her up to the team's room and told recently promoted field agent Benji Dunn to watch her. Sadly, Dunn was temporarily distracted long enough for Moreau to knock him out with a swift kick. She then attempted to kill him but Carter stopped her and they both fought each other. As Carter was about to kick Moreau out of a window, Brandt then comes up to the room and yells at Carter to stop, but she fails to listen to him and kicks Moreau out the window and Moreau screams as she plunges downward to her death. 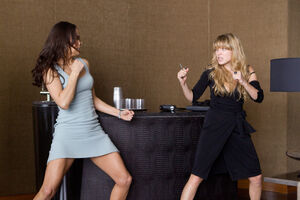 Sabine being kicked out the window to her death.