Villains Wiki
Register
Don't have an account?
Sign In
Advertisement
in: Article stubs, My Little Pony Villains, Redeemed,
and 21 more

To take away all things beautiful (formerly)

Sable Spirit is a villain from the My Little Pony: Friendship is Magic series episode, "Campfire Tales". She was the main antagonist of the Legend of Mistmane in where she was the titular protagonist's best friend who became a tyrant out of jealousy, but was then redeemed at the end.

Mistmane was once one of the most beautiful unicorns in all of Equestria and spent much time in a magic school, one day she received a letter informing her about her best friend, Sable Spirit, who had become the empress of their old village.

Delighted at the prospect of visting her friend again Mistmane returned to the village only to find that Sable Spirit ruled the village as a cruel and dystopian ruler who forced other ponies into miserable lives of poverty and hard labor while stealing anything of beauty for herself : she also took to dressing in a sinister black robe that hid her face.

Mistmane confront Sable Spirit over her cruelty and the former best-friend revealed that she had always envied Mistmane's beauty and tried to make herself beautiful, which backfired and caused her to become hideously disfigured : driven mad by her appearance and jealousy she stole the position of empress and enforced her will on the ponies of the land in order to steal beauty from everyone else, believing if she could not have beauty then no other being should have it.

Sable Spirit then engaged Mistmane in a magic duel in which her fiery hatred manifested as a large serpent while Mistmane formed a watery serpent of her own, eventually Mistmane overpowers Sable Spirit and traps her in a plant cocoon.

The ponies of the village rejoice in the defeat of Sable Spirit but Mistmane decides to take pity not just on her former friend but the entire village, sacrificing her own beauty in order to restore the village to its former splendor and also heal Sable Spirit's disfigurement.

Touched by the kindness of her friend Sable Spirit reformed and ruled the village as a peaceful and kind ruler, having learned the true meaning of beauty from Mistmane and her selfless actions. 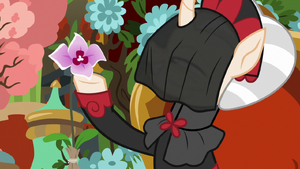 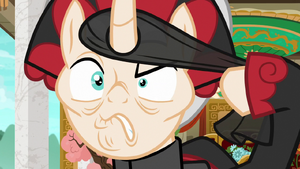