Affiliate of Magneto (both formerly)

Tormenting and trying to kill Wolverine.

Kidnap Psylocke (succeeded at the cost of his own arrest).

Graydon Creed Sr., better known as Sabretooth, is a secondary antagonist in season 1 of X-Men: The Animated Series, serving as a recurring antagonist throughout the rest of the series. He is a mutant supervillain, being a former member of Team X and one of Wolverine's archenemies alongside Omega Red. He is the father of Graydon Creed.

He was voiced by the late Don Francks, who also voiced Mok Swagger in Rock & Rule, Doctor Claw in Inspector Gadget, Kybo Ren in Star Wars: Droids- the Adventures of C3P0 & R2D2, Gmork in The Neverending Story's animated series, Dr. Greed in Journey to the Center of the Earth and D. D. Kovet in An Angel for Christmas.

Sabretooth is an imposing and very muscular individual, vastly bigger than most humans. His eyes are devoid of pupils he is blond, has non-retractable claws at the end of his fingers and sharp fangs.

He wears a beige suit with brown undertones like the gloves, the torso and the top of the head. The most distinctive feature is a huge blond fur collar protruding from the back, similar to a mane.

Sabretooth is a violent, sadistic, cruel, and deceitful mutant. Unlike Wolverine, Sabretooth fully embraces his inner savagery and has no qualms about harming others. The reason for his cruelty seems to come from his harsh childhood, when he was martyred by his father. He despises Wolverine more than anyone because of their past and is always ready to fight him whenever they meet. Although he's worked for Magneto a few times, Sabretooth prefers to go it alone.

Graydon is the son of Jebediah Creed, a redneck zealot who beat him for his mutant deformities as a child. As an adult, Sabretooth had a relationship with Mystique, who bore his junior son. During his time with Team X, Sabretooth left Silver Fox and Maverick to die by sealing the blast door with Omega Red facing them on the other side during a mission, which is exactly how his rivalry with Wolverine started to begin with.

At some point, Sabretooth began working for Magneto, who tasked him with trashing the inside of the X-Mansion. He breaks in and attacks Beast's trial to get himself purposely wounded, knowing the X-Men would take him in if he seemed to be in need of first aid. Wolverine suspects him of foul play from the very beginning and attempted to get rid of him, but gets stopped by Professor Charles Xavier, who tries to plunge into Sabretooth's psyche and help him control his rage. While most of the X-Men were gone fighting Magneto, Sabretooth was left alone with Jubilee. He tricks her into freeing him and nearly kills her for her trouble, but Wolverine arrives just in time to stop it. He escapes the mansion after wounding Wolverine with his claws.

Sabretooth later tracks Wolverine to the Arctic Circle and sets a trap for him, even nearly killing him, but Wolverine gets saved by a tribe of Inuit. Sabretooth tracks him down again and tricks a young tribesman who's jealous of Wolverine to lead him away from the village, allowing Sabretooth to burn it down and kidnap the rest of the tribe. He forces Wolverine to fight him again by threatening to kill the villagers with bombs over an ice bridge, but Wolverine and the deceived tribesman send him plunging him into a ravine.

He reappears in the episode "Weapon X, Lies & Videotape" to remember his own past alongside Wolverine, Silver Fox and Maverick. In the "Beyond Good and Evil" quadrilogy, he formed an allegiance with Apocalypse and helps kidnap Psylocke so Apocalypse could rewrite reality, but is again taken prisoner by the X-Men and escapes again afterward. At the end of "Bloodlines", he confronts his adult junior son, likely killing him offscreen. 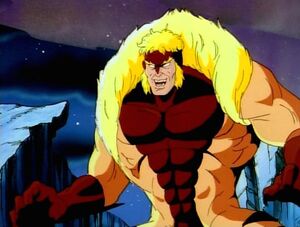 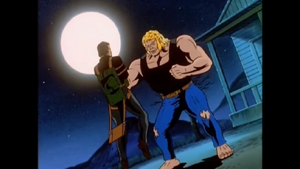 Sabretooth's last scene with his son