NOTE: This article is about the incarnation of Sabretooth from the X-Men film series. The mainstream version can be found here: Sabretooth (Marvel).

Help Magneto with his goals (succeeded).

He was played by Tyler Mane in the first X-Men movie, who also portrayed Michael Myers in the 2007 remake of Halloween and its 2009 sequel, and Rufus T. Firefly in The Devil's Rejects.

In X-Men Origins: Wolverine, he was played by Liev Schreiber in the prequel, who also portrayed Stu Wargle in Phantoms, Ray Donovan in the titular series of the same name, Ted Winter in Salt, Colonel Alexander Vosch in The 5th Wave, and also voiced the Storm King in My Little Pony: The Movie and Kingpin in Spider-Man: Into the Spider-Verse.

Victor Creed was born around the 1820s in the area that would be known as Canada to Thomas Logan an unnamed woman, and his father was the groundskeeper to the Howlett family. Not much is known about Victor's relationship with his father, but he doesn't mourn his death, and even states that he "deserved it". This implies that Thomas was either abusive to Victor due to his alcoholism, or neglected his son.

Eventually, Thomas had an affair with Elizabeth Howlett, and the two had a son named James, making him Victor's half-brother. Like his brother James, Victor was born with a mutant gene, which gave him a healing factor and retractable claws. In 1845, Thomas would come to the Howlett estate and murdered Elizabeth's husband John, who was then killed by James, who's mutant genes activated. When James left to the woods, Victor followed him and revealed that they were brothers, and the two decided to leave germanely and never looked back.

During the one hundred and twenty eight years, Victor and James became Canadian mercenaries and assisted the United States military in many wars. Serving in the American Civil War and the two World Wars, Victor and James used their mutant powers to survive fatal injuries and participated in many battles. However in every war he slowly begin enjoying killing people, becoming more ruthless, vicious and brutal.

In the movie X-Men Origins: Wolverine, he is Wolverine's older brother and the secondary antagonist who turned supporting protagonist and later the anti-hero of the film and was portrayed by Liev Schreiber.

He and Wolverine have been together, taking care of each other and have been in every American war due to their mutant ability of accelerating healing factor. During the Vietnam War, Sabretooth attempted to rape a Vietnamese village woman, and attacked his unit when they attempted to stop him. For his and James' insubordination, Victor and his half-brother were sentenced to death as a firing squad shot at them. The two survived due to their healing factor, and were placed in confinement due to the military fearing their powers.

Sabretooth's story is somewhat similar and somewhat different to Wolverine's story. They both were in the same team lead by William Stryker, who gave them the choice of staying imprisoned or joining Team X. The members were Agent Zero, Fred Dukes (aka Blob), Wade Wilson (aka Deadpool), John Wraith, and Chris Bradley (aka Bolt), who were assigned in many covert operations. During one mission, Sabretooth and the team were assigned by Stryker to obtain a meteorite (later revealed to be Adamantium) from a diamond trafficker in Nigeria. After completing the mission, the group head to a nearby village where Stryker questions a local about the meteorites. When the villagers refused to tell Stryker about the origin of the meteorite, he orders the team to attack. Wolverine interferes, and leaves the team due to Stryker willing to kill innocent civilians, causing Team X to be disbanded.

Despite the disbandment of Team X, Victor and Agent Zero stayed loyal to Stryker, and became members of his top secret project Weapon X. The project was to capture many mutants and experiment on them, and Stryker would send Victor to capture as many with his tracking skills. He agreed to capture mutants if Stryker could find a way to implement the Adamantium into his body. During one of his assignments, Creed captured Emma Silverfox, the sister to Kayla, who started to work for Stryker so she could save her sister.

Six years after Wolverine leaves the team he begins to kill and kidnapping other mutants under the command of Stryker, first killing Bolt at the carnival he's working at. He then "kills" Logan's girlfriend Kayla Silverfox in order to provoke him into accepting Styker's treatment so he can properly fight Victor. During the fight, Victor defeats Wolverine and crushes his bone claws, before leaving so Stryker could speak to him. Later on, Victor captures the teenage mutant Scott Summers, and killed Wraith before taking his DNA. He was confronted by Logan, but their conversation is interrupted by Gambit, who had managed to escape from Stryker's island previously.

Returning to the island, Victor witnesses Logan learning the truth that Kayla is alive, and watches him leave. Angered at Logan leaving, Victor confronts Stryker on their deal with merging his body with Adamantium, but William reveals that his body wouldn't survive the process. When Kayla attempted to tell Victor that Stryker was only using him, Creed attacked her before fighting his half-brother once again. Victor loses the battle, but returns to help his brother after being spared. In the end Wolverine and Sabretooth team up to take down Weapon XI aka Deadpool before leaving the island. Unbeknownst to Victor, Logan would lose his memory due to Stryker shooting him in the head with an Adamantium bullet, thus causing Wolverine to forget his relations to Creed.

While out on his own, Sabretooth became Magneto's right-hand and a member of the Brotherhood of Mutants, however he doesn't have much to say and there's no back story. All he mostly does is growl at everyone, mostly at Toad. Sabretooth encountered Wolverine in Canada, attempting to kill him before being stopped by X-Men Cyclops and Storm. He and Wolverine had a fight on top of the Statue of Liberty. With the powers of Cyclops and Jean Grey they blasted Sabretooth through the Statue of Liberty and fell right through a security boat.

He is confirmed to have survived the fall, but has not made a live-action appearance since then. A possible explanation for his failure to properly recognize Wolverine is that he had become so feral by this point that he lost his memory, though since the "Origins" film was released after "X-Men", the writers probably hadn't thought of it yet.

Sabretooth appears as a major antagonist in X-Men: The Official Game, where he still serves the Brotherhood under the leadership of Magneto.

A hologram version of Sabretooth is fought by Wolverine in the Danger Room, and it is frozen by Iceman when it nearly defeats Logan. When the Sentinels are activated underneath the HYDRA base in Alkali Lake, Sabretooth and the Brotherhood work with the X-Men to fight against the machines in Hong Kong. During the mission, Magneto ordered Sabretooth to kidnap William Stryker's son, Jason, and fails when Wolverine confronts him in the mastermold. He loses the fight against Wolverine, being pinned down during the destruction of the mastermold, but it's assumed that he survived. 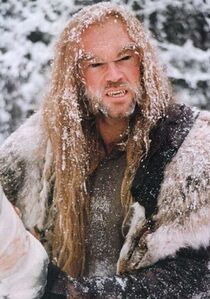 Sabretooth in X-Men, attacking Wolverine in the snow. 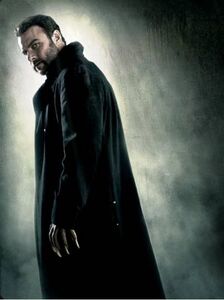 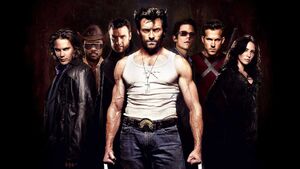 Sabretooth on a promo poster for origins. 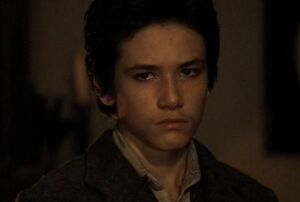 Victor in his youth. 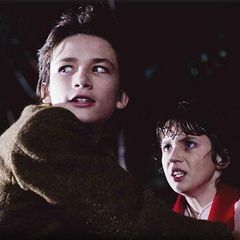 Victor and James, as children, prepare to leave their home.

Victor and Logan fighting in the American Civil War. 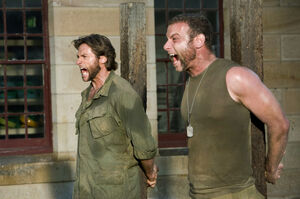 Victor and Logan screaming as they face a firing squad in Vietnam.

Sabretooth with the members of Team X. 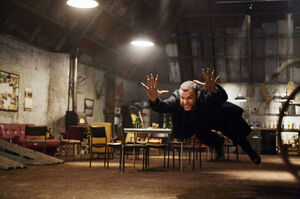 Victor attacks Logan in a bar. 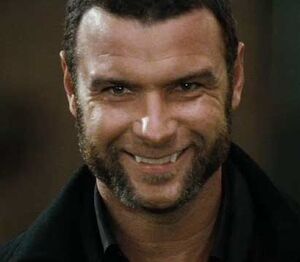 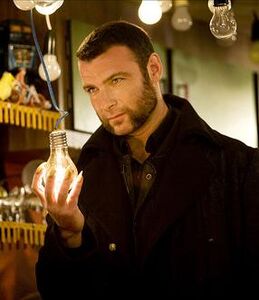 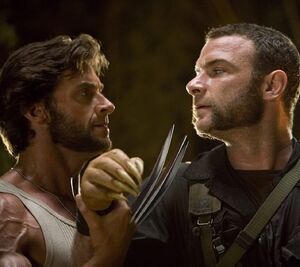 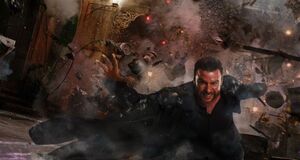 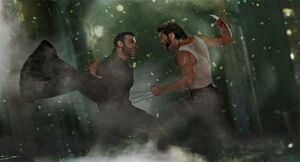 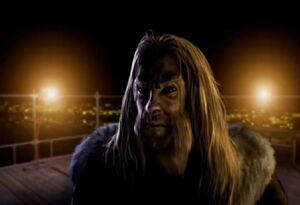 Sabretooth in X-Men: The Official Game.